Not everyone who buys an older home wants to modernise it. In fact, some people, like interior designer Tania Bell, have every intention of keeping their Melbourne home’s retro vibe while replacing the ageing and impractical parts in a very sympathetic way. 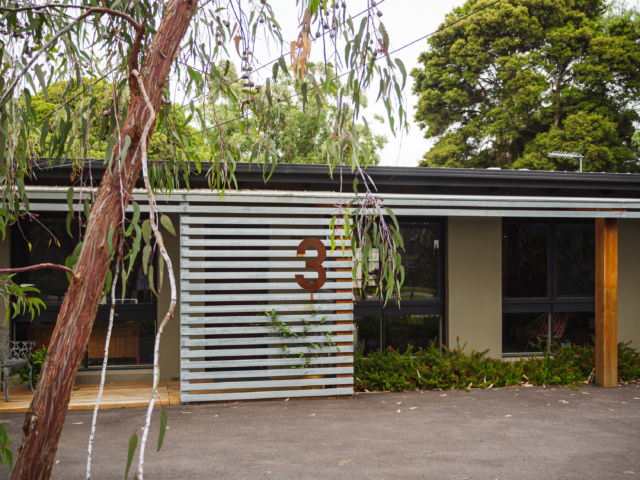 It has taken almost a decade for Tania and builder husband Andrew to finish their reno, so they certainly spent enough time living in it as it was, to know what they really wanted from the end result!

“When we were searching for our first home together 10 years ago, we wanted somewhere that hadn’t had too many dodgy renos done to it that we had to undo! We wanted something that we only really had to superficially renovate; something that had good bones and didn’t need an extension,” Tania said. 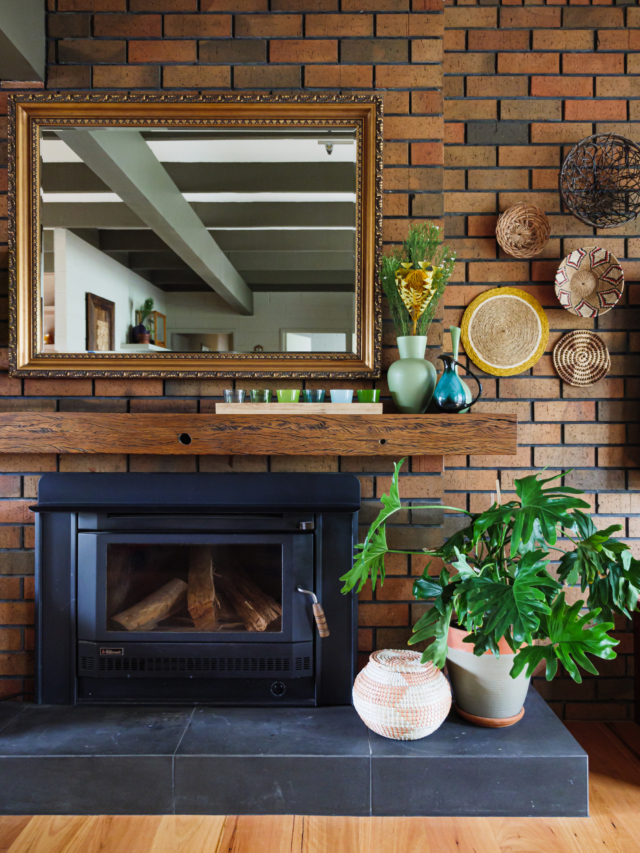 A big block, a big garage and a spare room for her home office were also top of the wishlist. “As soon as we walked in the front door at the open for inspection, we both looked at each other and knew this was our house!” Its flat roof, Besser block walls and exposed beams made it a bit quirky and probably put a lot of people off. “I think most people thought, ‘no, too hard and too expensive  to work on’. Fortunately, we both had a similar vision for the place and Andrew being a builder doesn’t scoff at hard work, so we went about renovating.” 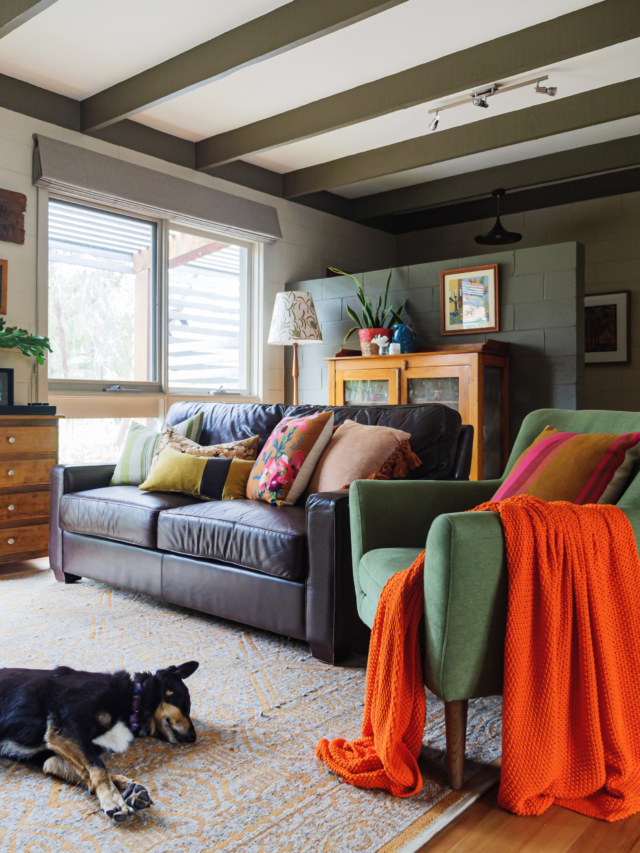 The couple have done a lot of the work themselves and with the help of industry friends. And they definitely suffered from doing their clients’ homes first, ahead of theirs. “I quite often tell my clients to live in their home and experience it before they make any changes, but I fear I may have followed my advice to the nth degree!” Being exposed to so many products and so much inspiration through her design work, meant Tania also changed her mind. A lot! “In the end I just had to make a decision and get on with it!” 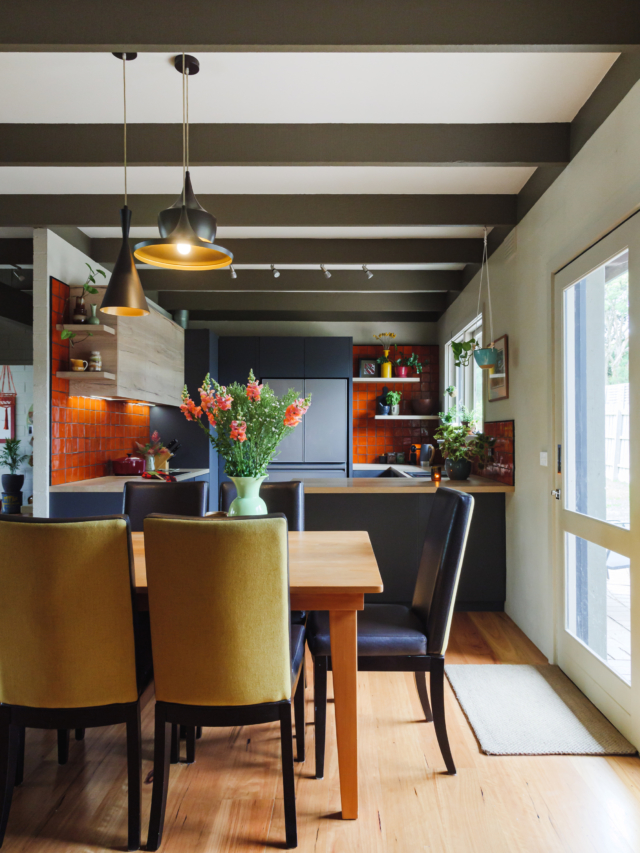 The couple clearly love the 1970s style and Tania says it can actually fit in with a contemporary scheme very easily. “The bright, acid-like and clashing colours attract me to the era, as well as the textures and patterns in the soft furnishings. I also think that the dark timber and moody brick features in my home add some character to the space. The overall feel of the 70s is warmth and comfort, which makes a house more homely and cocooning.” 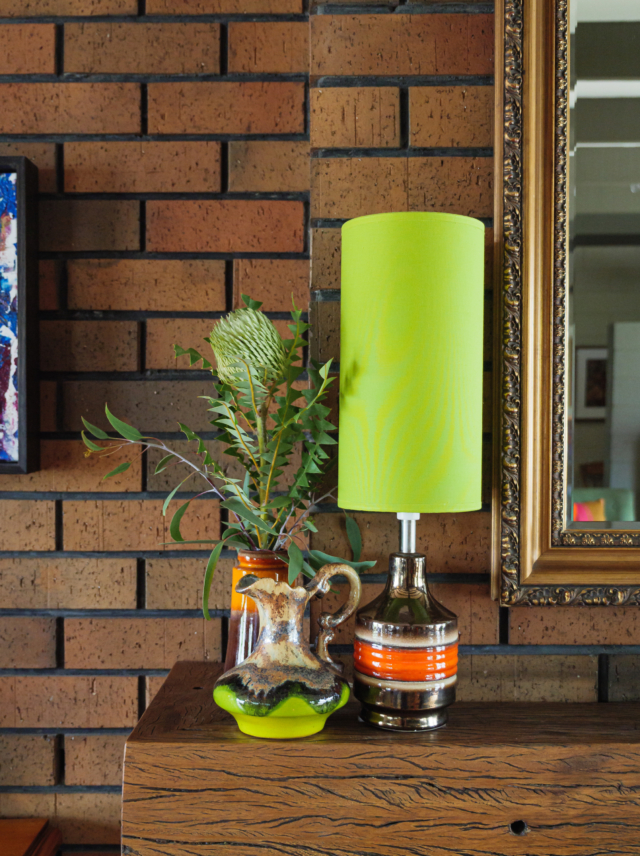 While she initially loved the original dark terracotta floor tiles, after a few years, she was sick of them showing every bit of dirt, and discovered were also cold and noisy. They were replaced with solid, rustic blackbutt timber. “It has made such a difference to the home and really lightens up the space and is warmer underfoot too.”

The kitchen however, was hated from the outset! “It was a daggy old 70s kitchen that the builder built himself out of plywood and didn’t have a kicker, so I would always bang my feet on the bottom of the cupboards. When we finally demolished the old kitchen over 18 months ago, that was a day for celebration!” 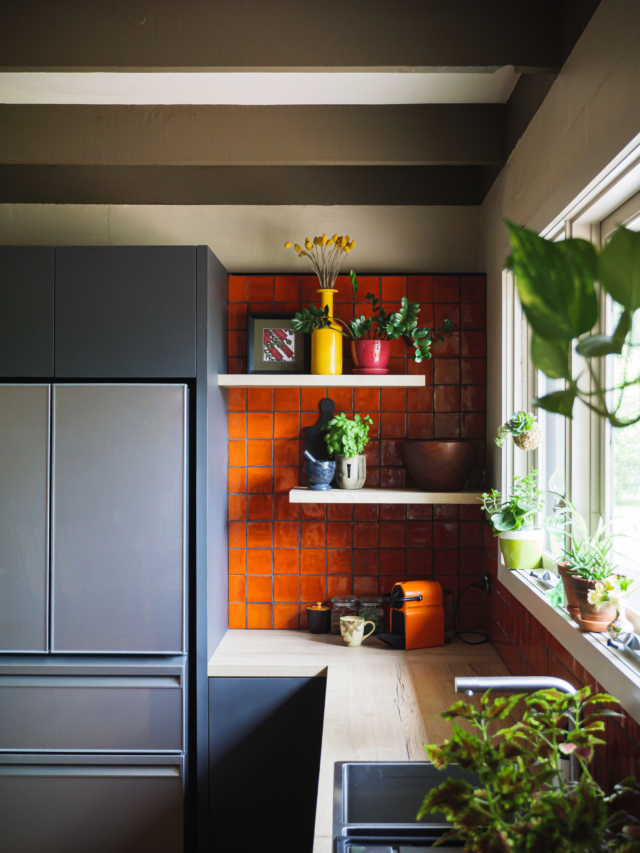 She was always keen to keep the brick feature wall along the fireplace, which provides much warmth and texture and sets the tone for the overall colour scheme. “I chose the colour for the timber beams from the bricks as well as the wall paint. We also continued that timber beam colour (Dulux Bronze Fig) outside to the new render cladding.

They’ve taken a lot of the cues from the existing original features of the home in order to keep its original feel. “Instead of going with a standard white kitchen, we used a rustic timber laminate benchtop and graphite coloured joinery with a vibrant orange handmade Portugese tile on the splashback.” They continued the orange tile into the bathroom, teamed up with charcoal tiles on the wall and floor. 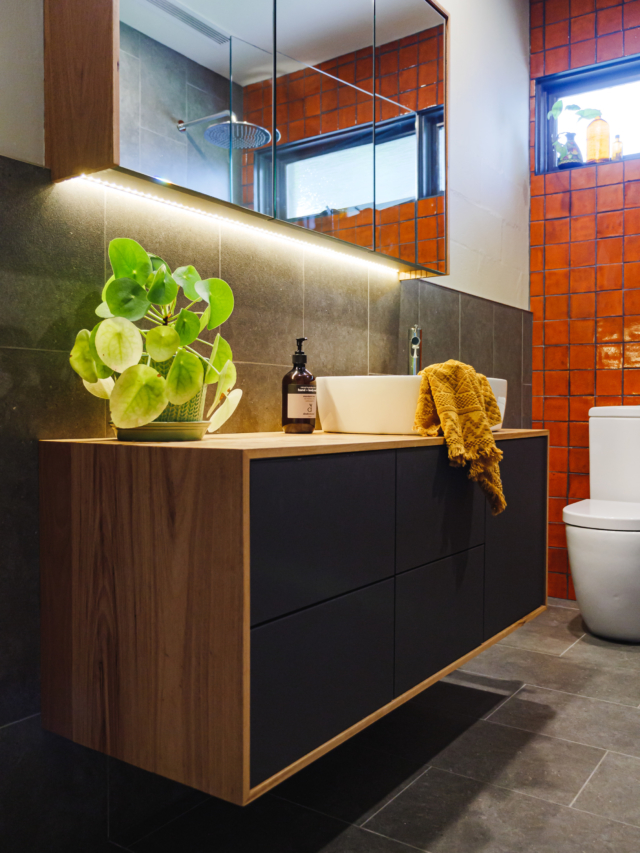 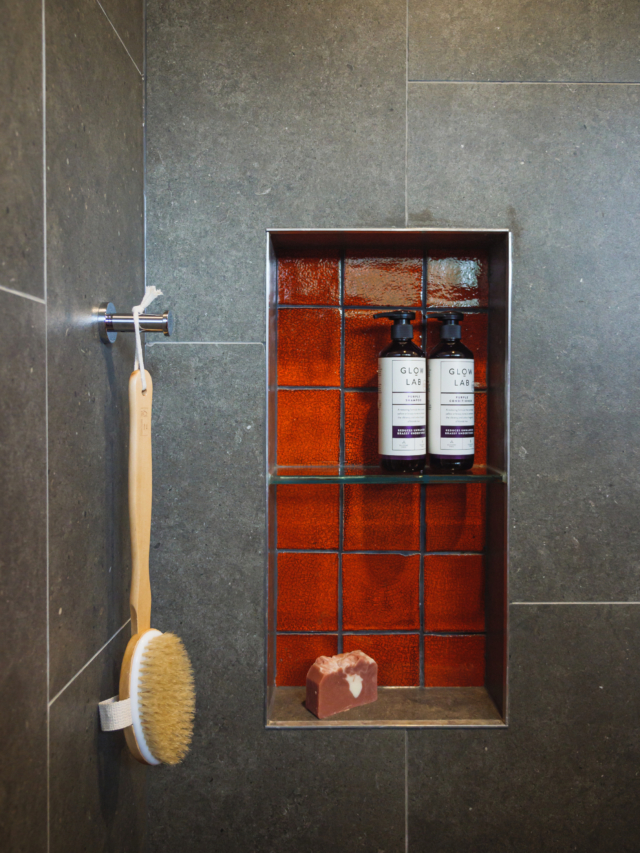 Tania thinks the 70s look has come back into favour and she’s certainly not its only devotee. “I believe that the push back to warmer and more earthy tones in interiors, especially with paint colours, timber furniture and textiles, is why we are seeing it being reinvented for a contemporary setting. I also I think that a lot of the homes in our suburbs that are being renovated and not knocked down were built in the 1970s, so people are wanting to embrace a bit of the nostalgia of a time gone by.”

Another 70s house reno that didn’t keep its retro feel