Our Young Designer series aims to inspire those who are yet to get their first foot on the ladder in this fiercely competitive industry.

At 27, and with a couple of jobs under his belt, Khoa Nguyen now works for himself at Brisbane-based Design Poets. He also teaches wannabe designers at Queensland College of Art (QCA).

While he learned a lot from working for other people, the self-confessed design nerd and young father just had to give being his own boss a go. So far, it hasn’t been as hard as he imagined.

So, when did he know you wanted to be an interior designer? “I was doing my building course and next to us were some students studying interior design. I popped my head in to see what they were learning about it and it appealed to me so much more than cyclone ratings for timber framing. That was the day.”

He has some pretty strong views on the relevance of design qualifications though! “I’ve studied quite a few different things, from building design to interior design to digital illustration at various different places and I am currently contemplating whether to do my Masters in Design. But I tell my students the first day I meet them, that the piece of paper you get when you graduate doesn’t mean anything to any employer. It is 65 percent personality and 35 percent portfolio.” 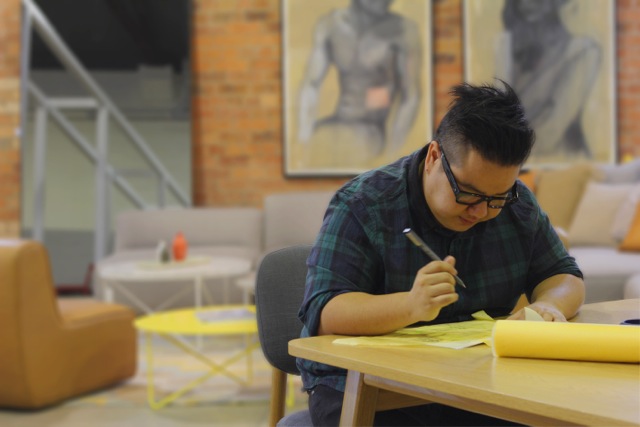 When it came to Khoa’s first job, one of his design teachers asked if he was interested in a graduate position and he said why not? He passed a CAD test, got shortlisted and had an interview. “In saying that, there was a lot of work in the industry back then. If it was as quiet as it is now, I may not be doing this interview with you!”

His typical busy day involves running around to meetings, answering emails on the fly (always trying to squeeze in lunch with his family), meeting suppliers and sales reps. “At close of business, I have dinner, play with my daughter, get back to answering emails, doing some design and CAD work, go to bed, stay awake thinking about work… and repeat x 5!

“I am my own boss now, however, I have learnt a lot not only from my previous bosses, but my seniors, my colleagues and my students. You never ever stop learning in this industry or in life. The best part of my job is working for myself. Whilst it is hard to run your own business, it is super rewarding. I once said that running your own business feels like you’ve just had a whole chocolate cake to yourself: satisfying, fulfilling, heart-stopping, tiring and life-changing.”

A frequent struggle is balancing the amount of time and effort he spends obtaining work versus the amount time and effort he spends on the work he already has. Like everyone else in this Young Designer series before him, Khoa says people outside the industry wrongly assume the job isn’t much more than picking curtains and cushions. “What people don’t understand is that our job requires us to have quite an extensive knowledge base about everything there is to do with the built environment, not just interiors. Picking curtains is the last thing we worry about!”

When it comes to graduates getting their first step on the ladder in the interiors industry: “The ladder they’re trying to climb at the moment is too full. Build a spiral staircase and climb that instead. You will get to the same place as everyone else, just differently and in style.”

In five years’ time, Khoa would like to be sharing his chocolate cake with a small team in a warehouse somewhere, perhaps New York. His parents remain his biggest inspiration. “We came here to Australia as refugees 20-odd years ago with nothing, and for my family to be where we are now is a credit to them. From their struggles I’ve learnt that everything I have in life now is a bonus.”

CHECK OUT OUR OTHER YOUNG DESIGNERS: Brendan Guy, Connie Condylios and Lauren Rugless.