Well, look at that, here we are again with another series of The Block, sharing Sunday night’s reveals with you, the judges’ comments and where to buy what you saw on TV. Remember to check in with us every Monday for our famous roundups!

I must say, they were all very impressive bathrooms considering how early we are in the competition, the lack of experience of some of the contestants and the difficult (and that’s putting it mildly) building. Not to mention setback after setback with the usual construction site issues! Come reveal, I’d say there were five really good bathrooms but one was clearly head and shoulders above the rest and, not surprisingly, Shay and Dean took out the $10,000 win. Good job too considering they spent a whopping $40,000 on their first penthouse room, a third of the total budget for all 10. Luckily their risky spend paid off!

Onto the reveals, what judges Neale Whitaker, Shaynna Blaze and Darren Palmer had to say about them and what I thought too, plus where to buy our favourite items… 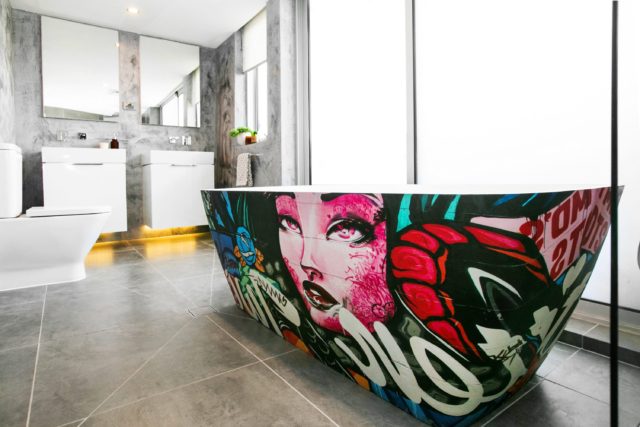 The Townsville couple made a very brave move with their feature graffiti bath. I personally hated it (not my style) BUT I thought it worked and was memorable and you can’t argue that it suits an edgy Melbourne home. I thought Kingi’s hand rendered wall on the other hand, was fantastic. And the vanities and lighting were just right. Good on them for making such a brave choice on week one (and happily that graffiti design is removable!). 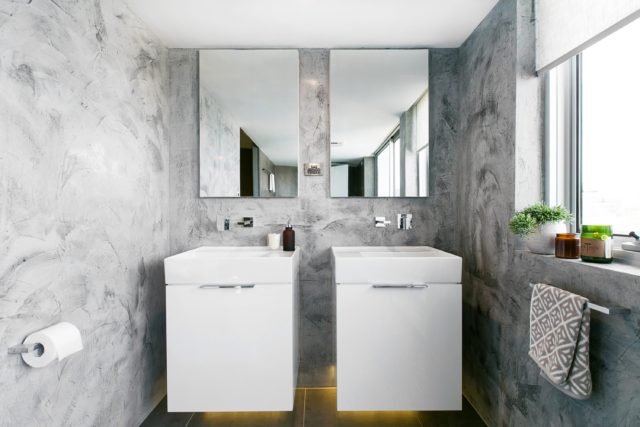 What the judges thought: Shaynna said the bath was exciting and she loved it, while Neale loved the rendered wall, Darren adding that Kingi had nailed it! The judges said they’d created something memorable which would be noticed by potential buyers. On the downside, Darren thought the towel choice was unsophisticated and Shaynna thought the blinds blocked out too much natural light. Neale finished off by saying he loved that they’d taken a risk this early on. 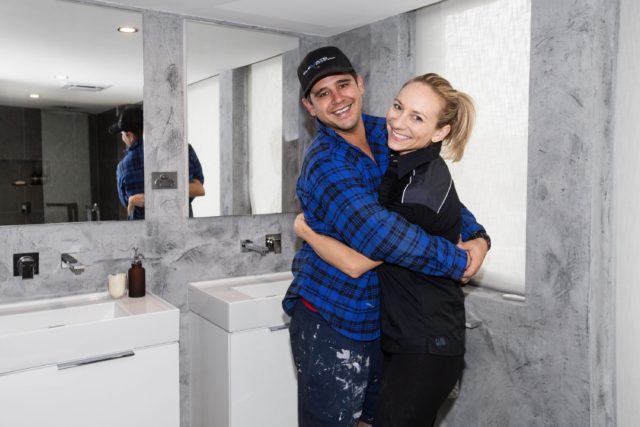 After their challenge room being called the worst EVER by the judges last week, this pair had something to prove! And they tried really hard and with lovely results. They took out their wardrobe to make the room bigger and made lovely use of timber in my opinion, for a warm and relaxing feeling bathroom. While I really liked this bathroom and agreed it was a vast improvement on last week, nothing about it excited me that much. 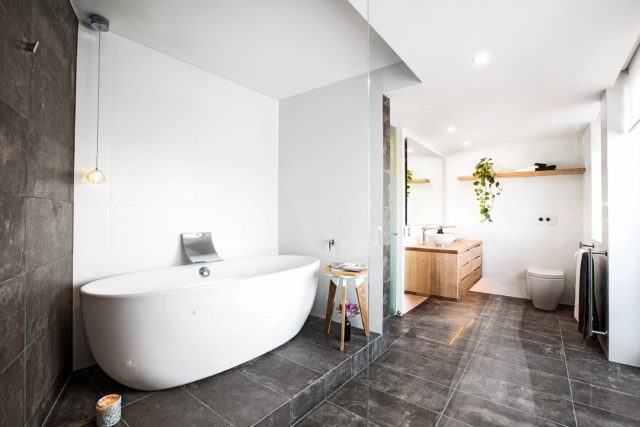 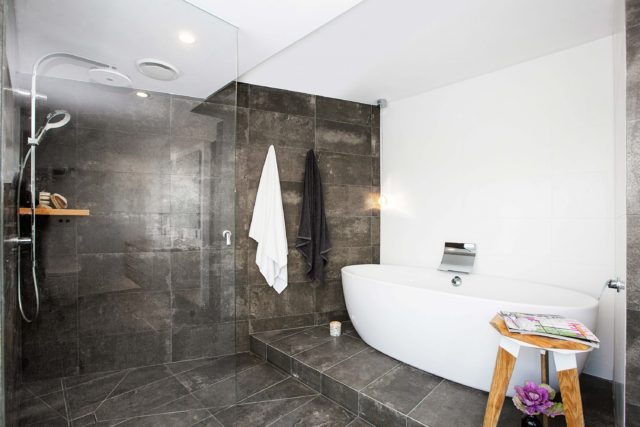 What the judges thought: Neale said they’d gone from zero to hero in one week (was this really the same couple who gave us plastic gerberas?!) and Darren said it was a cracker! Shaynna loved the custom vanities and matching timber shelf and said the lighting plan was perfect. She added that while last week had been a disaster, this week the couple had proven they had talent and a great eye. There weren’t many downsides but Neale said the styling left a bit to be desired and the pendant over the bath was too small. 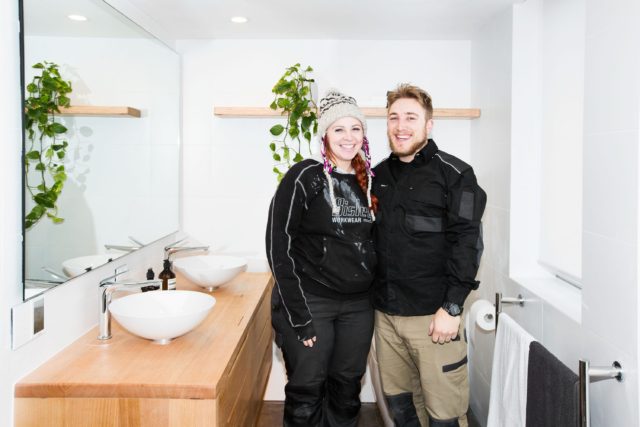 It would be easy to underestimate these two former bikini models from the Gold Coast and that’s of course exactly what the TV producers would have you do (and then later be proven wrong!). BUT, I think we’re actually dealing with two rather nice, hardworking single mums who just happen to wear a lot of makeup, show a lot of cleavage and have a penchant for the more blingy things in life! While it wasn’t my personal taste (too much black and bling and I didn’t like the tiles although I think they were a brave and unique choice and good on them for doing something different), I thought the girls did a great job this week, despite setbacks. And I loved how you could walk all the way around the tub. I think this pair have realised their look may be a little too Gold Coast and I hope they’ll tone it down a bit going forward so as not to alienate potential buyers. 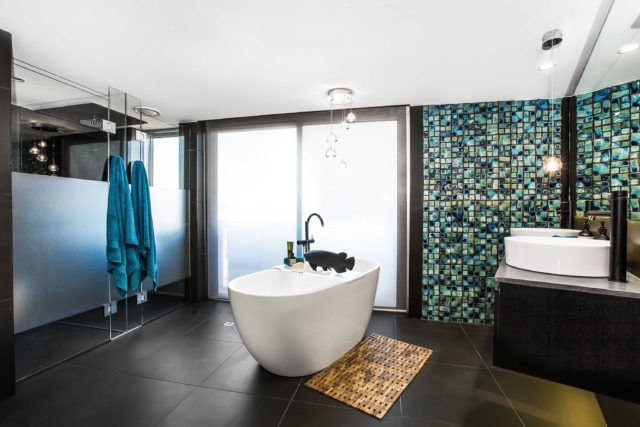 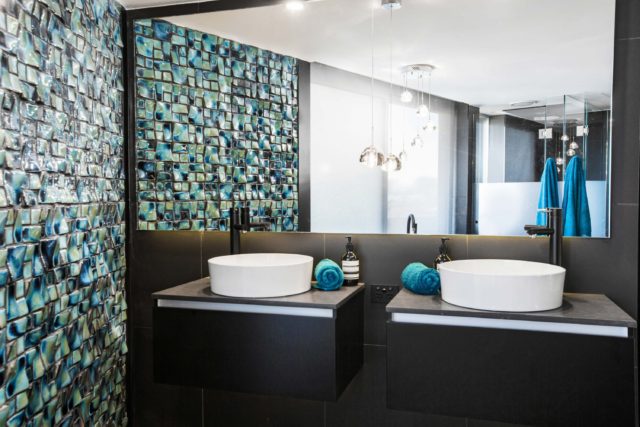 What the judges said: Neale said it was sexy and Shaynna loved the tiles while Darren stood back and saw the negatives, like the fact the window onto the shower wasn’t frosted and you couldn’t keep your privates private (hehe!) while the pendant in front of the mirror was too glitzy and not necessary. Shaynna noted the functional storage wasn’t good and while she found the LED strip light magical, Darren said it looked like a giant barcode (I’m with you on this one, DP!). Neale said they’d hooked him though and overall the judges were impressed. 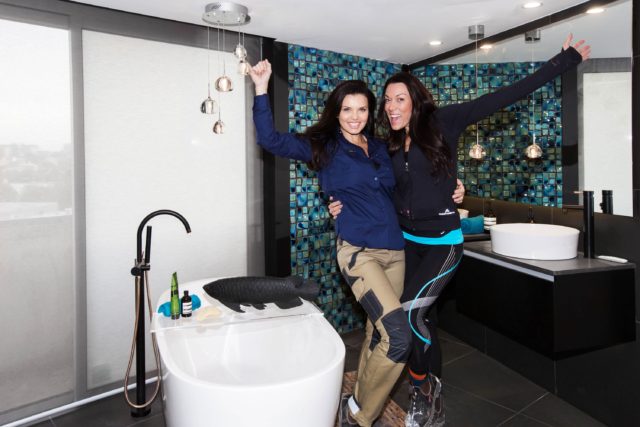 Where to buy: Strip lighting | pendant light | handwash and lotion

It’s the comeback kids! After last series’ bathroom fail, my favourite brother and sister couple had much to prove too and sadly, they didn’t quite cut it, coming last. I really felt for them when they were hit by a series of delays. The navy blue high gloss tiles were unique and on the face of it, really nice, but I just can’t go past those odd taps and the tiny basins, and I agreed with Neale that the LED lit alcove wasn’t right. And while I loved that bath, I’m not sure a black bath was the best match for the blue tiles? It has the potential to be fixed up pretty easily though, I think, into something much better. I feel bad, I love these two! But I have every faith they’ll impress more as the competition goes on (please be right, Jen!). 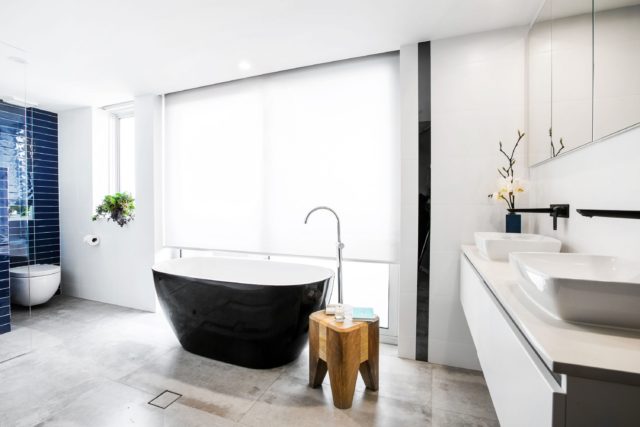 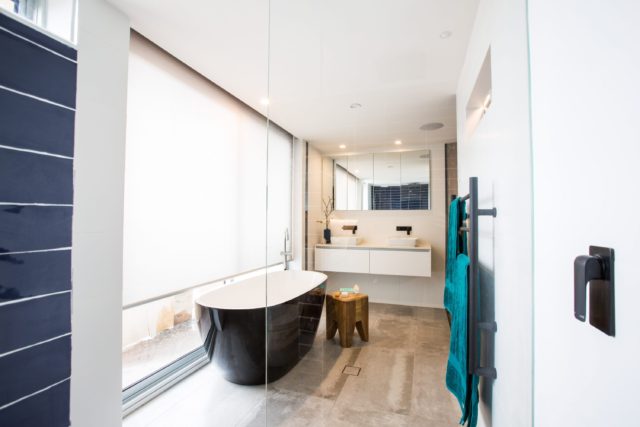 What the judges said: First impressions were great. Shaynna loved the layout, the lighting, the separate toilet. Neale said it felt small after they made the call to square off the angular room. He really wanted to like it but didn’t like the niche in the wall with the LED lighting and found the basins too small. Shaynna added the taps were also too big and none of them liked the mix of chrome and black tapware. Neale said a lot of things in the room jarred. Shaynna said they’d made great choices individually but when put together they almost cancelled each other out. It was, however, very well finished. 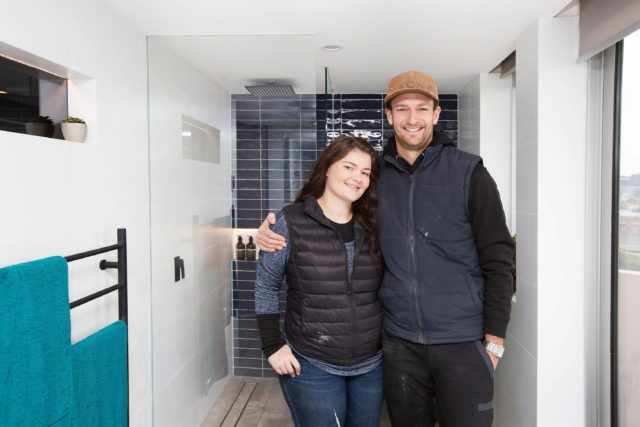 While I don’t think these photos do this $40,000 penthouse bathroom justice, I do think it was the clear winner and absolutely loved its black and gold accents and stunning herringbone tiles. I just didn’t like the towel choices and felt the timber lights didn’t work in the scheme. But overall: WOWSERS. Loved it. 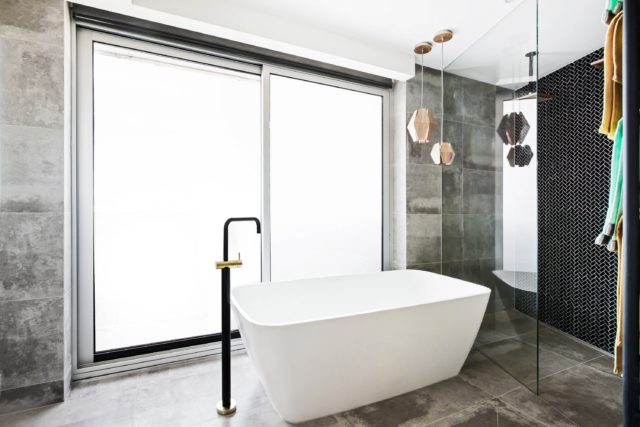 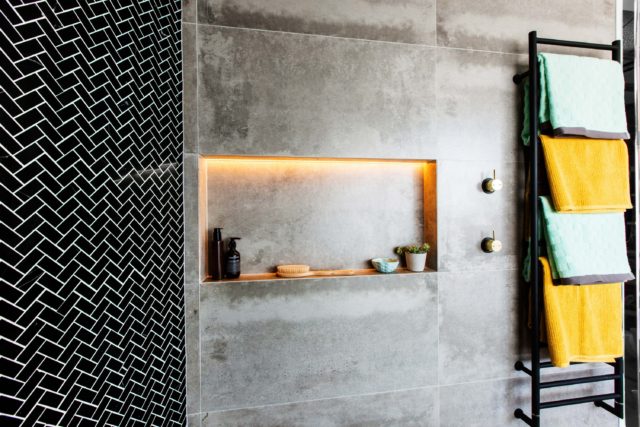 What the judges said: As Shay mentioned countless times, this is the penthouse and expectations would be high! The judges were not disappointed. “Um, this is HOT,” said Darren, adding that everything was just so. Neale said it was a level of sophistication not seen in any of the other bathrooms, despite them being very good. He went on to call it mindblowing while Darren said he was losing his mind! Mission definitely accomplished by the Newcastle couple! Shaynna loved the tiles and how they’d been used and said they were hot (that’s two hots now!) and the only thing Neale didn’t like was the pendants (we’ve seen them before and they’ve been overused). The execution though, was faultless. Neale said that while they won last week’s challenge, it was as the best of a bad bunch; this week they had seriously raised the bar! 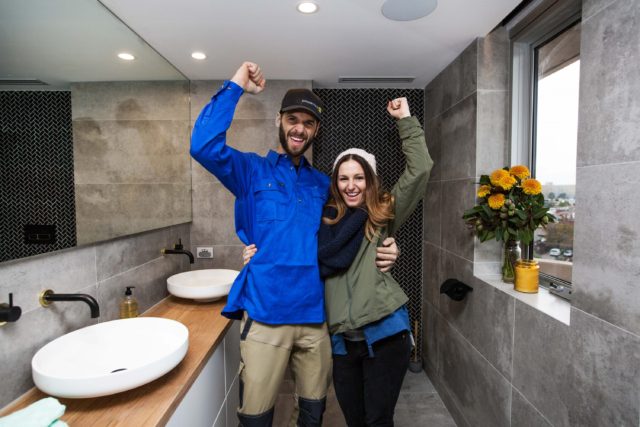 Overall, a fantastic week one! Which was your favourite? Did the best room win?

Did you read Darren Palmer’s beautifully written piece about his marriage in yesterday’s Sunday Style in the Daily Telegraph? If not, you should absolutely read it!