“The concept with Nood Co was to create a contemporary product brand with duality. To take a masculine building material and present it as feminine as possible,” says Matt Di Costa, co-director of the stylish Perth-based concrete basin company Nood Co. Prior to launching the brand, Matt studied architecture, had a career as a polished plasterer and was a contestant on The Block too. “Given my background, concrete and design was a logical business,” he says.

And while many former Blockheads rely on the TV association when forging careers after the show, it’s something Matt has avoided with the brand that he founded with friend Chris Walker – preferring instead to let the product speak for itself. “We are very honoured to have been a part of The Block, and all they have done for us. I am, however, a believer in letting the product take centre stage,” says Matt.

Launching in 2017, with a furniture and basin range, Nood Co has since simplified its offering which now includes 65 basins that range from surface mount to wall hung, pedestal and freestanding designs. But what truly sets the brand apart is its use of colour – the Nood Co designs are available in 14 on-trend shades including blush pink, peach, mint, teal and more.

“When creating the range, the goal was to create pieces that complemented other pieces in the bathroom space so they had to be restrained and carefully coloured. Less is more kind of vibes,” says Matt of the brand’s minimal, contemporary aesthetic.

Good looks aside, Nood Co delivers on the quality front too – the brand’s concrete composition is strong and features a solid colouring system which results in basins that are 100% coloured throughout. “Nood Co concrete has admixtures in the composition that give it its natural water tolerance. This means that we only seal with a penetrative sealer in a very minimal way. The resulting effect is a basin that never has to be resealed, and will never delaminate, which is real breakthrough for concrete and makes us unique to all others.”

Nood Co also boasts solid eco-credentials – its concrete harbours zero chemicals, the Nood tint is chemical-free and the basins are waxed with 100% organic wax. Interestingly, the basins take 96% less embodied energy to make than their ceramic counterparts. “Our concrete is VOC-free also and we offer recycled packaging and donate to Carbon Neutral Australia to offset our carbon footprint,” says Matt.

It’s certainly a winning formula given that the brand has countless overseas stockists, its products have sold in 42 countries and its site is visited annually by 112 countries. “We have more products in the works and a big showing at Denfair Sydney later in the year. We also have some other surprises coming, particularly for the design community. I can’t say too much but expect us to keep pushing the boundaries and to keep it fun!” 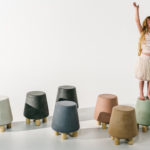 Block’s Matt & Kim launch a fresh take on concrete homewares
Let’s face it, we saw a LOT of concrete in homewares last year. So much in fact that it perhaps… 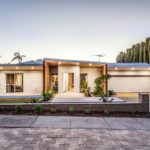