Elvis Abrahanowicz and Sarah Doyle, co-owners of Argentianian restaurants Porteno and Bodega, live with their two poodles Marcel and Buddy in a terrace in Sydney’s Newtown. 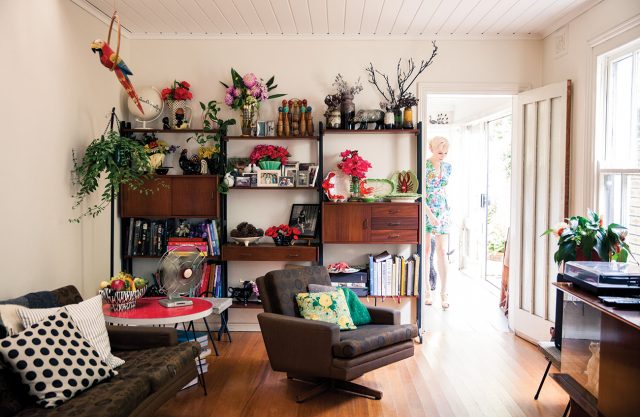 When you’re number five in a family of six girls, secondhand is part of life. “I grew up in Vinnies,” says Sarah Doyle. With a childhood like that, you might think she’d want to be surrounded by new things. Instead, Sarah wears vintage (altered to fit perfectly) or vintage-inspired pieces, and looks as if she’s stepped out of the ’50s; and she and husband Elvis Abrahanowicz’s terrace, in Sydney’s Newtown, is crammed with retro belongings. 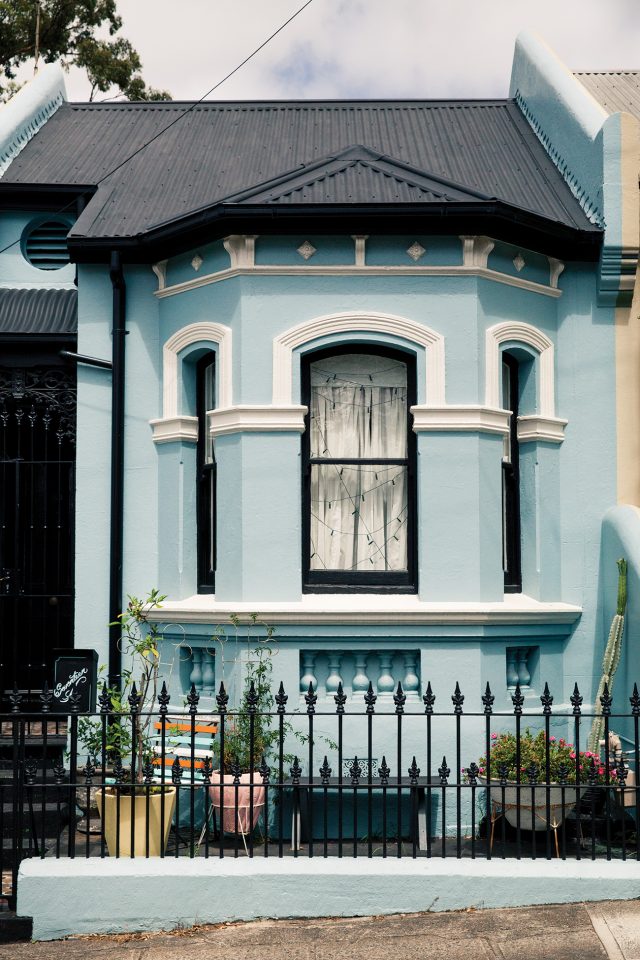 Sarah and Elvis, who run two Argentinian restaurants, Bodega and Porteño, with their mate Ben Milgate, are crazy about rockabilly. They love the music. They love the style. “Once we found our rockabilly community, we realised it was OK to dress like this every day,” says Sarah. 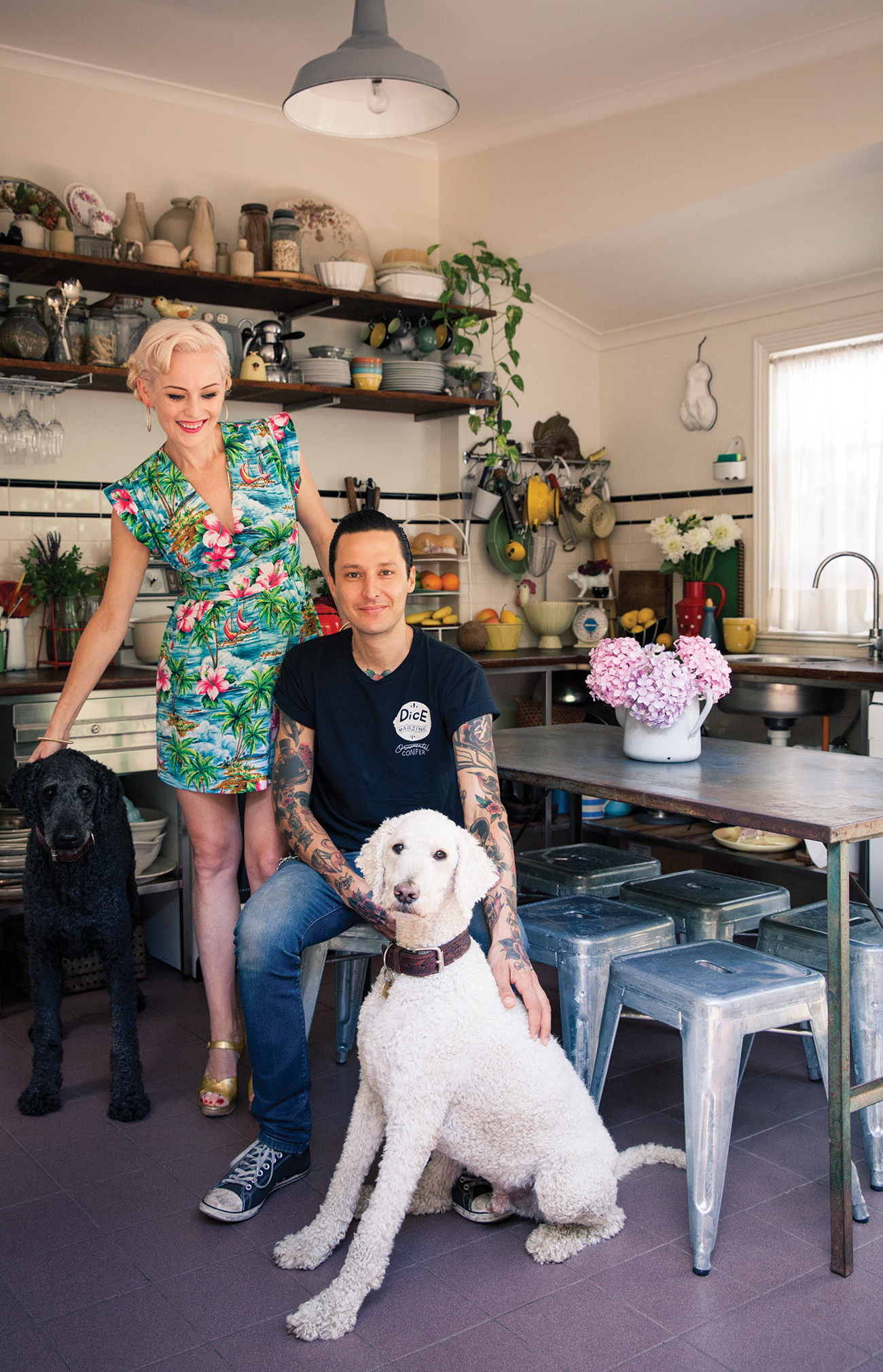 When they’re not working, they’re often cruising around in Elvis’s 1933 black Ford Roadster or Sarah’s two-tone blue 1958 FC Holden, with adored standard poodles Marcel and Buddy in the back, or they’re out walking the dogs or checking out flea markets.

They found their house, which was built in 1889, six years ago. Painted in a “rancid butter” colour, with horrible white carpet in all rooms, it needed more than a little bit of imagination to peel back its layers of nastiness. Buying the house more or less coincided with opening Bodega, and so, says Sarah, all their energy went into that rather than their new home. It didn’t help that Porteño opened two or three years later. “We’ve meant to do things to the house, but haven’t got around to doing too much at all,” she says. She’s exaggerating just a little – they’ve done more than enough to turn the place into something lovely. 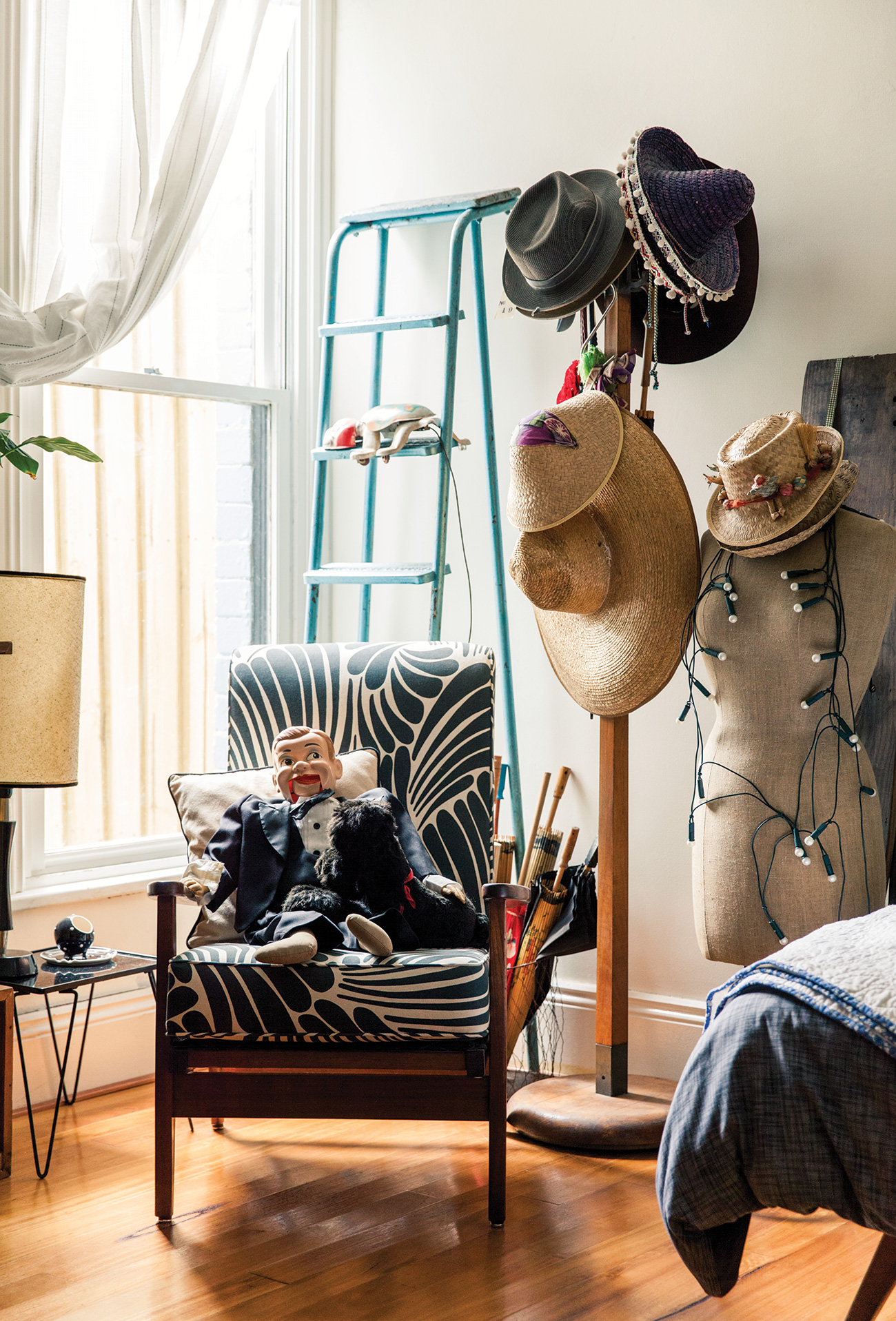 What had attracted them to it wasn’t so much the house, but more its location, not far from the suburb’s main strip, King Street. “Everyone’s got their own thing going on around here,” says Sarah. “There are the ravers, the goths, the rockabillies, everyone’s so friendly, and no one judges anyone else.” It turns out they moved into the nicest street possible, where neighbours help each other and actually want to hang out together, and one of them has the keys to everyone’s houses.

Elvis and Sarah always knew they wanted to live somewhere in the inner city. They both grew up in the suburbs – Sarah in Penrith, and Elvis in Fairfield, after his family moved from Argentina when he was seven. But in the 14 years the couple has been together, they’ve always been close to the city. “We looked at buying somewhere else before we found this,” says Sarah. “We’re not known for our patience and were really angry when we didn’t get that place in Chippendale. I went out and looked at a couple more places, saw this and made sure we got it.” 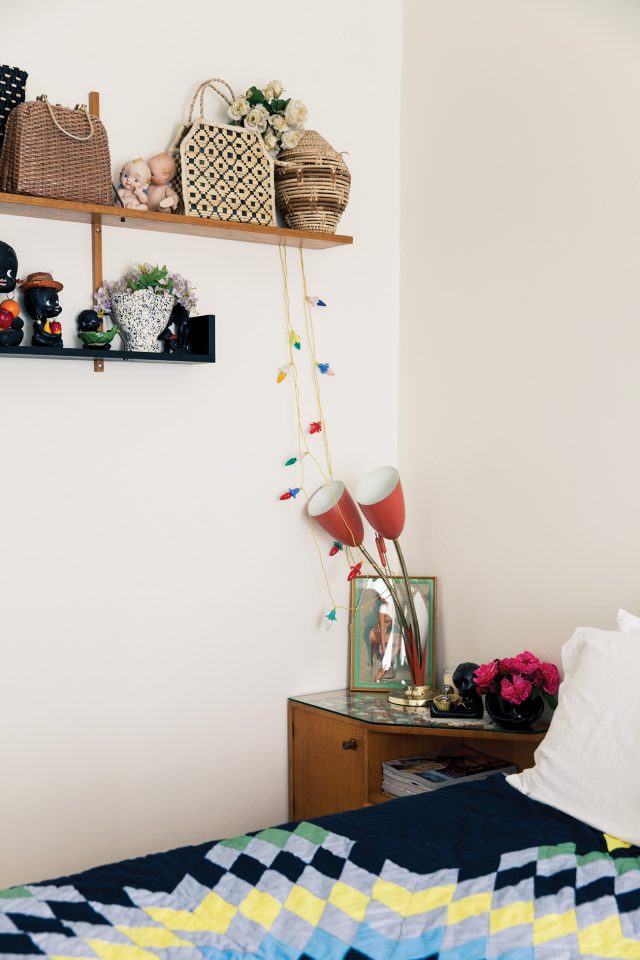 One of the first things Elvis did after they moved in was to chip off a piece of plaster in the hall to see what was behind it. He discovered beautiful old bricks, but then kicked himself for doing it. “I realised I’d have to do the whole lot, and it took ages!” It also created lots of dust, so it was just as well they didn’t want the carpet, which they ripped up afterwards. After that, they repainted all the rooms and installed new floorboards, and suddenly the house started to look loved again.

A chef needs a good kitchen, and so it was a priority to replace the less-than-appetising purple and white one that was there. Not that he and Sarah get much time to cook at home when they’re running two restaurants; but when they do, it’s good to have it exactly the way they like it. “We got the guy who does the restaurant fit-outs to do the steel for us here,” says Sarah. “He kept saying, ‘Don’t you want proper cupboards?’” They didn’t – they wanted all open shelving, with a recycled timber top. “We only have stuff out that we use,” says Sarah, adding that everything is from another era. “We don’t have things like electric kettles and toasters or microwaves – they’re so ugly.”

One of their greatest finds is the old St George stove. There was already one there when they moved in, but after that broke down, they found another on Gumtree for virtually nothing. “The guy who brought it round couldn’t understand why we’d want it,” says Sarah, “but it’s the best, totally controllable. He said he’d install it for us, which was great – it turned out he’d worked on ovens for Qantas for more than 20 years.” 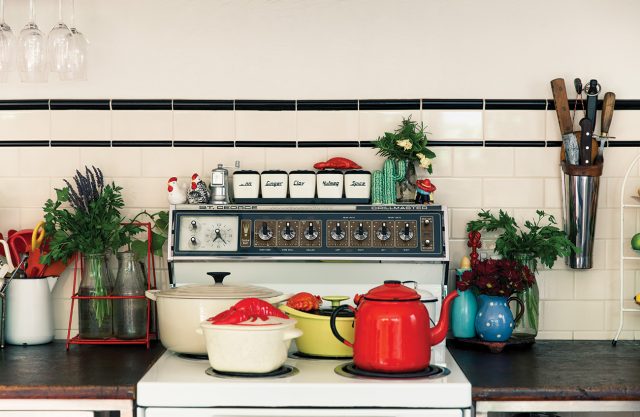 The rest of the house is furnished and decorated with pieces picked up at flea markets, vintage stores, op shops and vintage festivals. A lamp in the lounge room is Sarah’s one-and-only purchase on eBay. “I find eBay too confusing,” she says, “and I like to go out and look around and find things myself.”

Favourite pieces include a $5 parrot found at a flea market, which now hangs in the living room, and the dressing table made by Edward Hill, a Surry Hills cabinetmaker, which they discovered at one of their favourite shops, Retro on Regent. Over the years, they’ve become friends with the owners. “Whenever we go there, I fall in love with everything in the shop,” says Sarah. “Now when we visit, I stand outside, to stop myself.” 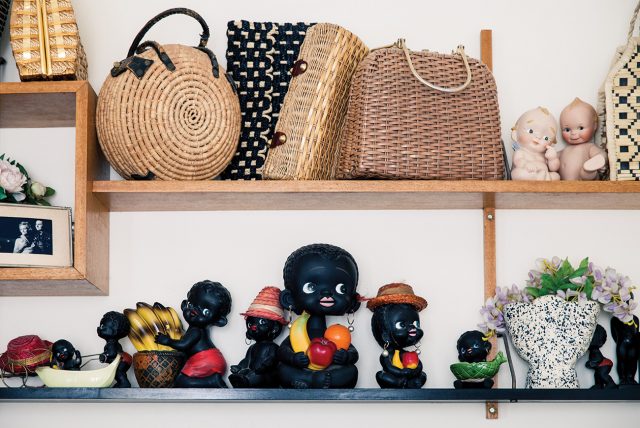 Even the bathroom has a vintage touch, thanks to the cupboard above the washbasin. It’s custom-made, with doors concocted from an old mirror that has been sliced down the middle. “I didn’t want one of those boring bathroom cabinets,” says Sarah. And then there’s the phone in the bedroom, an old wall-mounted one, restored and in working order. “It’s not great for doing phone banking,” she says.

Throughout the house, there’s a sense of love and of people who don’t take themselves too seriously. The Christmas lights are still up in the bedroom, mainly because the bedside lights are American and the bulbs blow all the time. Fake flowers are dotted around the house. “I love fresh ones,” says Sarah, “but when you’re working all the time, it’s hard to have them.”

In the house, too, there’s the feeling that they’ve chosen everything together. There’s only one area they don’t agree on. “The artwork – he likes tattoo art and car stuff,” says Sarah, pointing to pieces hanging in the hallway. “And I like anything that’s not that.”

This article is an extract from the book Spaces volume two by frankie magazine, which has been re-released in time for Christmas. Buy online for $24.95 with with free shipping within Australia. 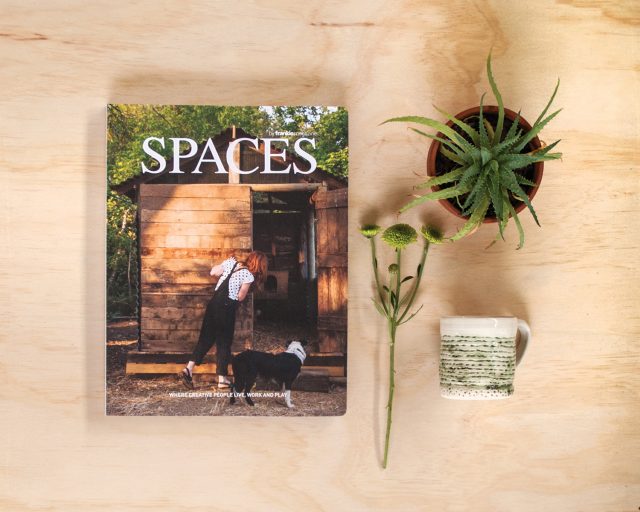