Aussies sure are known for their love of travel and Natalie Shell has made Tel Aviv her home, via stints in New York, Copenhagen and Amsterdam! Today, she shows us around her home and shares some expert tips on decluterring and small space living. 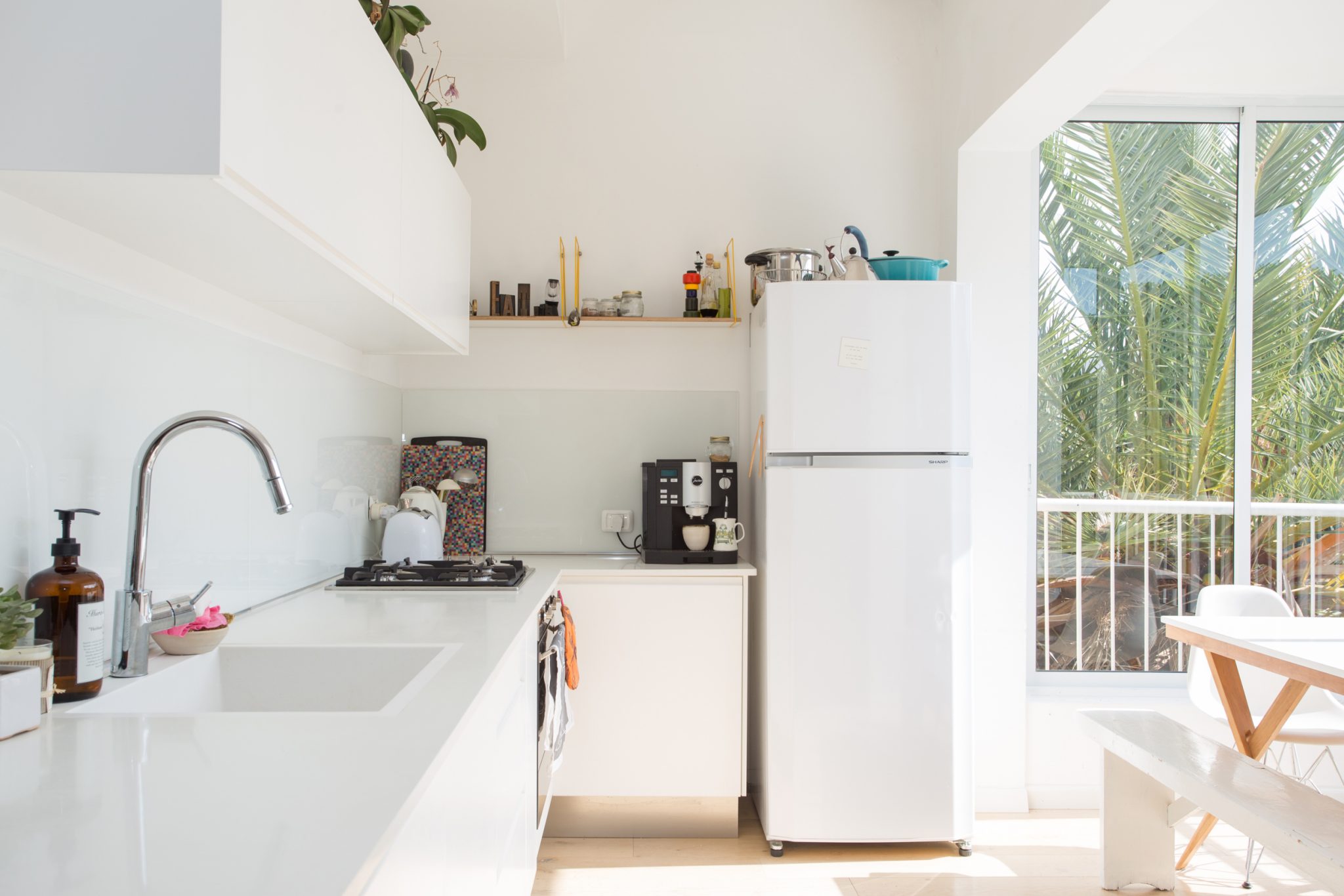 One half of global interior design and decluttering business Apartment Diet, Nat met fellow Aussie and business partner Tip Atkins Moore in Amsterdam. Now they work together via the wonders of the world wide web. 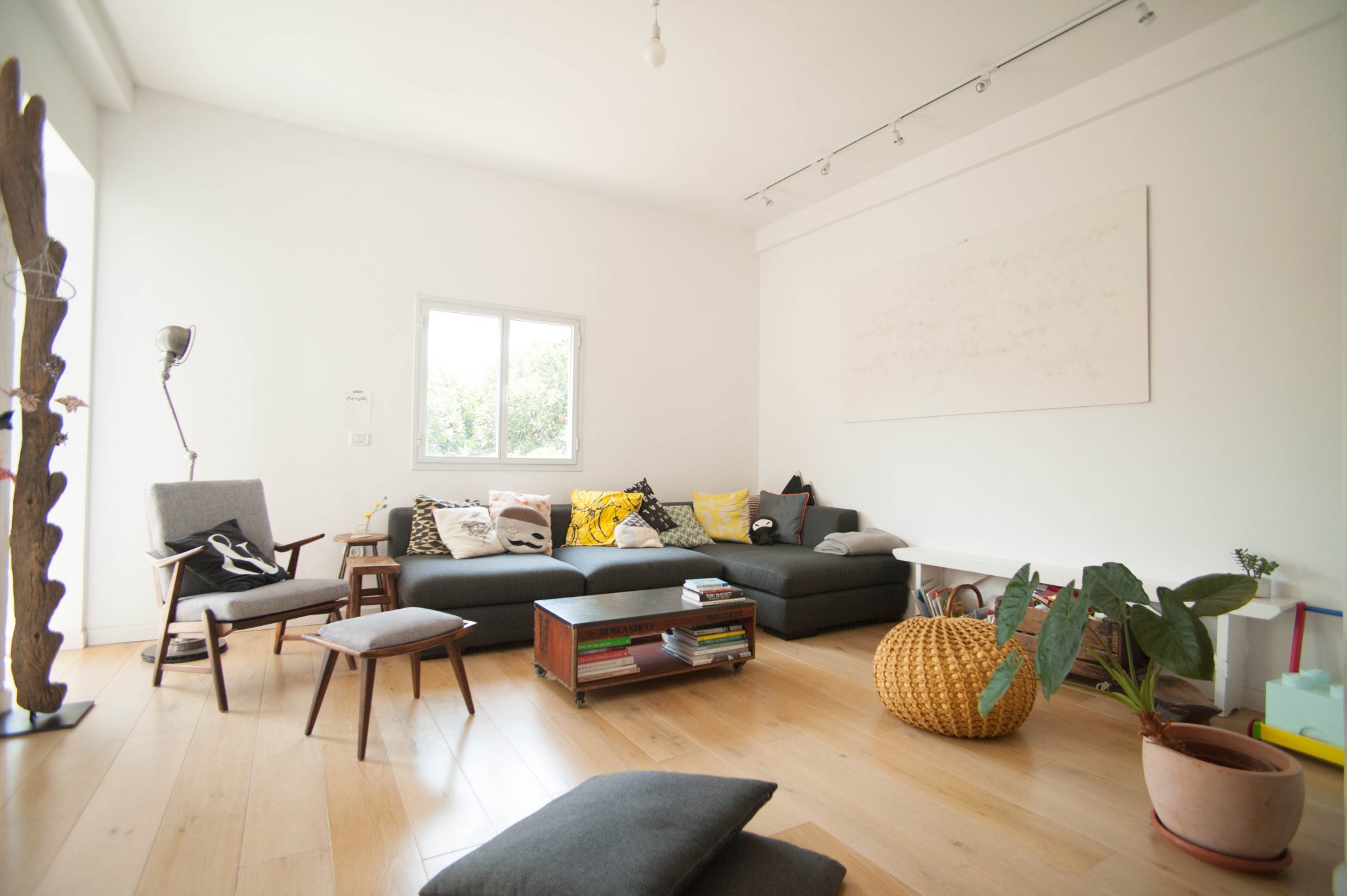 In 2007, Nat had a friend living in Tel Aviv so she went to stay for the summer holidays and ended up falling in love with the place. She later met (now husband) Noam and the rest, including son Luke, is, as they, say, history!

Now back to her newly renovated Tel Aviv home: “We live in an old, typical Tel Aviv building in the city’s “old north”. We bought in May 2010 and moved in in September after renovating for 2.5 months (read: gutting it and starting again). Even in its weird, pokey, unrenovated state (there were seven rooms in only 75 square metres!) it had great light and airflow and a lovely energy, and is situated in a great neighbourhood (location, location, location always applies!).”

Almost everything needed changing so serious vision was required. The layout and flow were all wrong and the pink bathroom and olive green kitchenette, plumbing and electricity hadn’t been touched since 1950s. 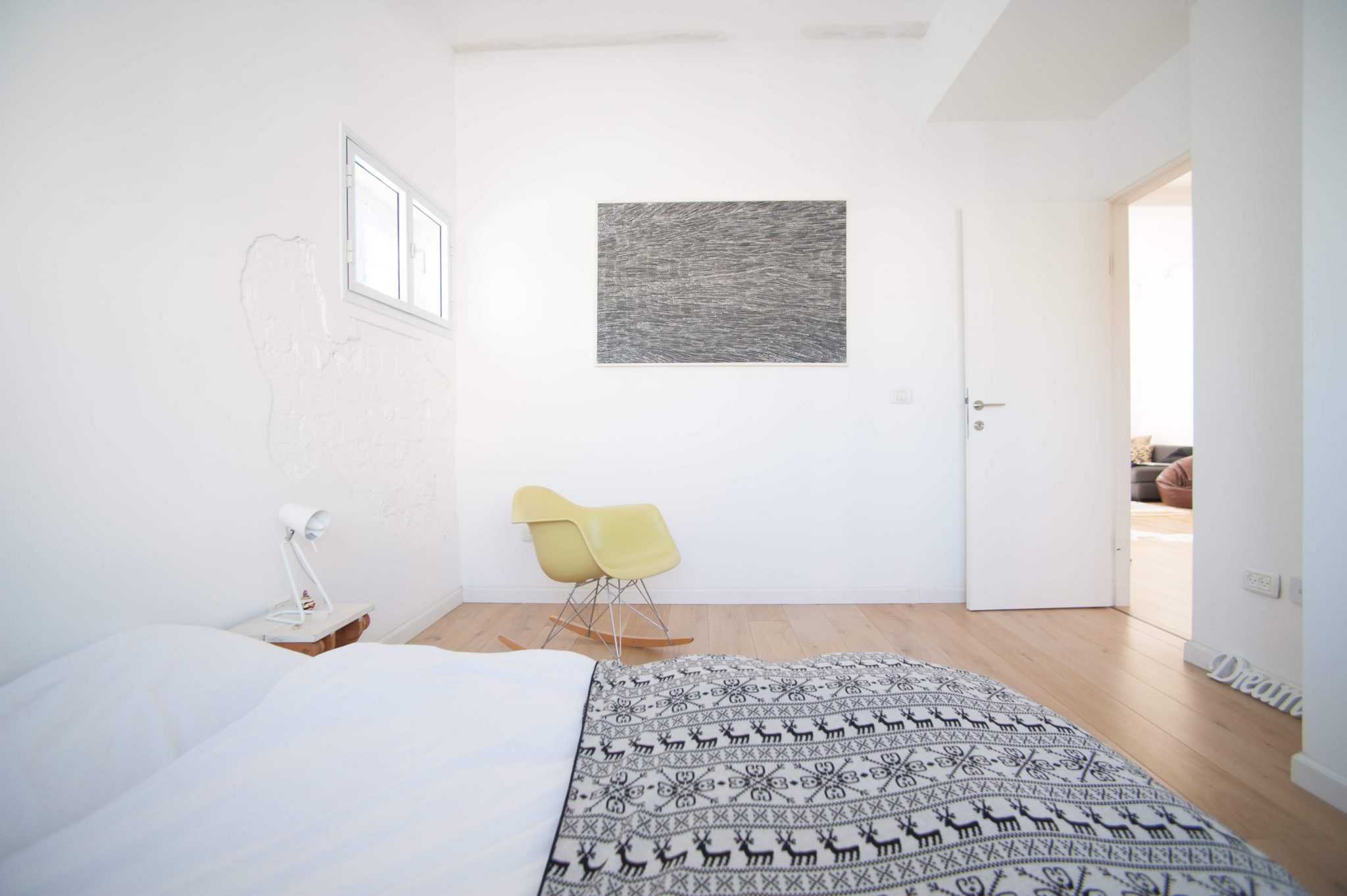 “I knew what I wanted and worked with an architect friend Roy Itzhaki, to create the technical plans for a layout I envisioned and learn building project management,” Nat says. “First and foremost, after the basics, was making the flow work for us to create two bedrooms, a bathroom and guest toilet and an open kitchen/living room. I wanted to maximise living space and the light and create a space that was relaxed, fun and inviting.”

She chose a simple colour palette of timber, white and dark grey. “I’d lived in Copenhagen and have picked up a bit of the Scandinavian aesthetic. I also I love art and fun pillow covers and wanted a simple palette that would allow me to show them off.”

Almost all the internal walls came down and the bathroom was moved while other rooms were reoriented. They added a laundry into a closet in the new bathroom and lots of built-in storage, and Roy suggested turning the walk-in closet into a walk-through, effectively turning the apartment’s one bathroom into an en-suite from the master as well. Clever! 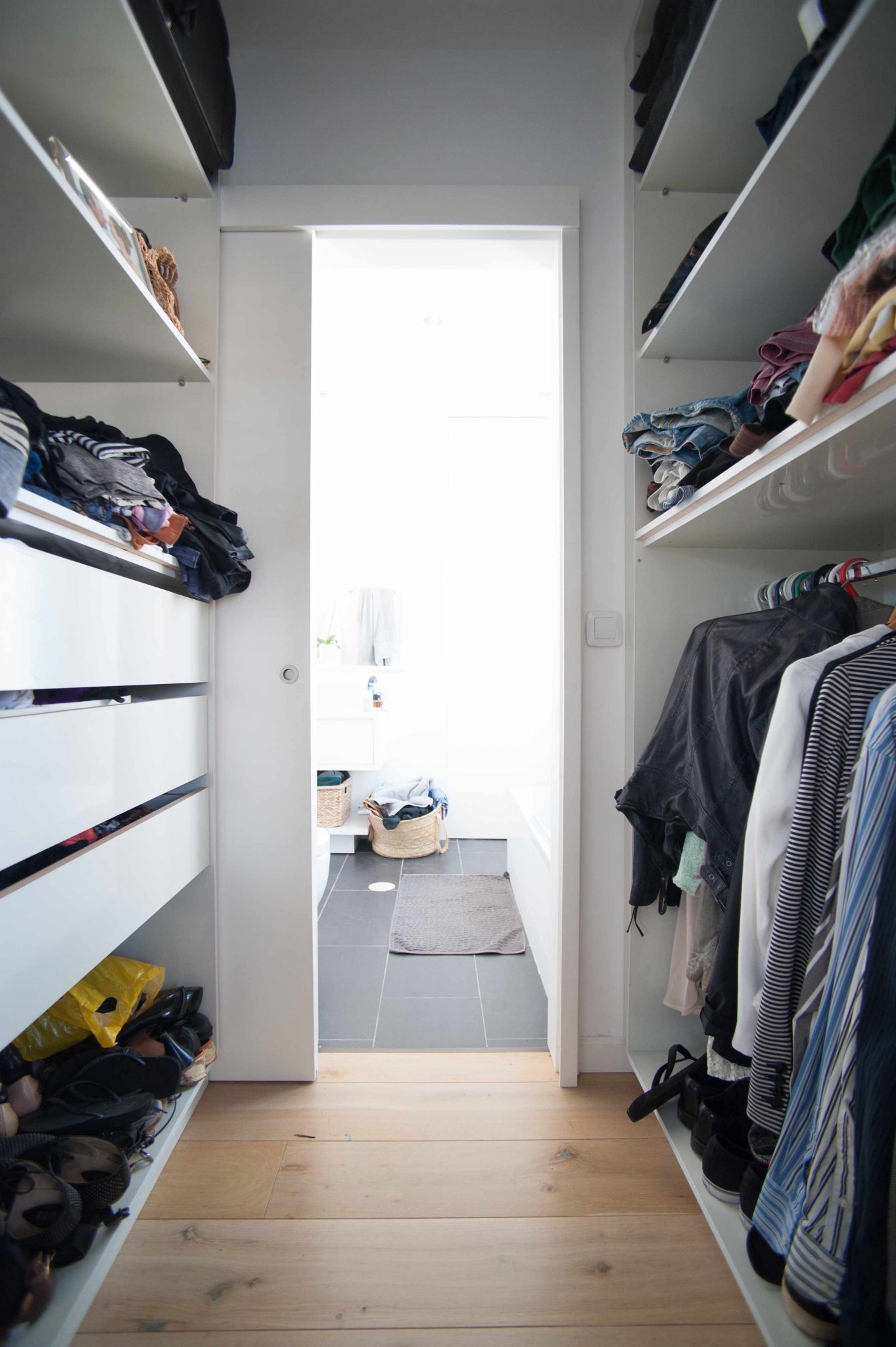 The new layout is a vast improvement, not least because you no longer have to walk through the kitchen to get to the second bedroom! “There were just too many rooms for such a small space and the layout made the space feel dark.”

Nat’s favourite thing about the apartment is how it feels. “It just feels good.” She’s also a big fan of the exposed brick areas. “My original plan was to remove a pylon between our living room and kitchen but then the structural engineer said the building couldn’t handle it, even with a steel beam. That weird brick structural pylon, and the original brick wall that was behind the original kitchen (now our bedroom), are now features I love.”

While Nat misses her family and friends in Oz, she describes Tel Aviv as an amazing, vibrant creative city, filled with great food, coffee, sunshine and beaches. “It’s in a crazy part of the world, but perhaps that’s part of the attraction.” 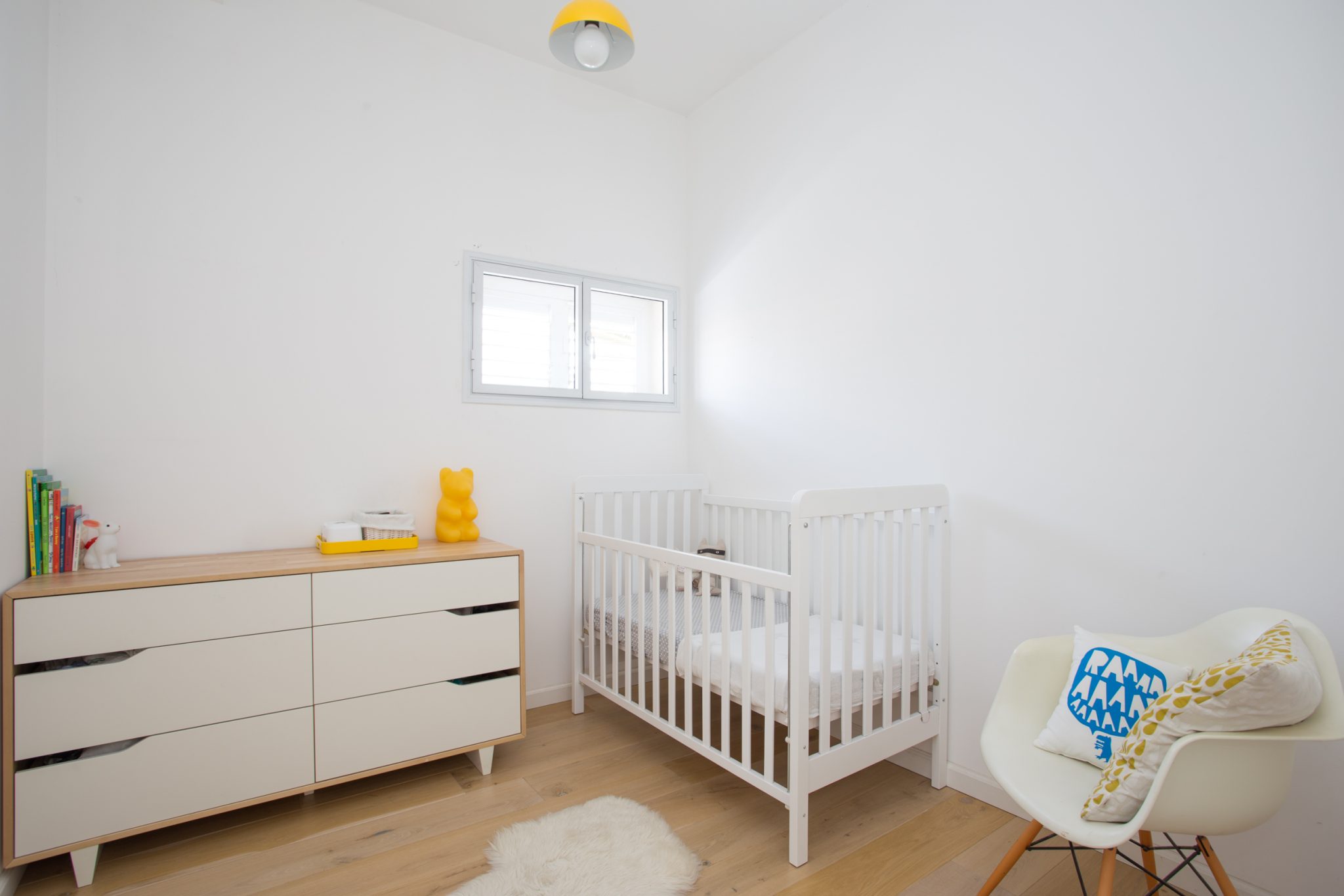 Nat and Tip have plenty of advice for other people living in small spaces but the key is to design for how you actually live, not for how you think you should. “For instance, if you don’t eat at home, you may prefer to have a larger couch area with a coffee table and some extra stools, making your living space bigger and not having furniture you don’t need. If you are renovating, think about how you want to live — do you like to spend time in the living room? Then consider designing more space in shared areas than say the bedrooms.

“Have good storage (preferably that closes). At the same time, we sometimes make the mistake of paying for extra storage rather than first letting go of things that don’t belong. Sliding doors and mirrors are also a good trick, though I personally went for art framed with glass and a glass splash back over mirrors because I prefer that type of reflective surface.

“When it comes to furniture, don’t have too much. Choose furniture that is the right scale for the space and that can easily move (for instance, we often host dinner parties where we add a fold-up table to double the size and move the table into the living room/entrance void).”

Last but not least: “Have some empty space. It sounds strange but empty space, like our entrance and part of our bedroom, can make a space feel bigger. Edit what you own regularly and if something doesn’t belong, even after you’ve bought it especially, sell it or let it go.” 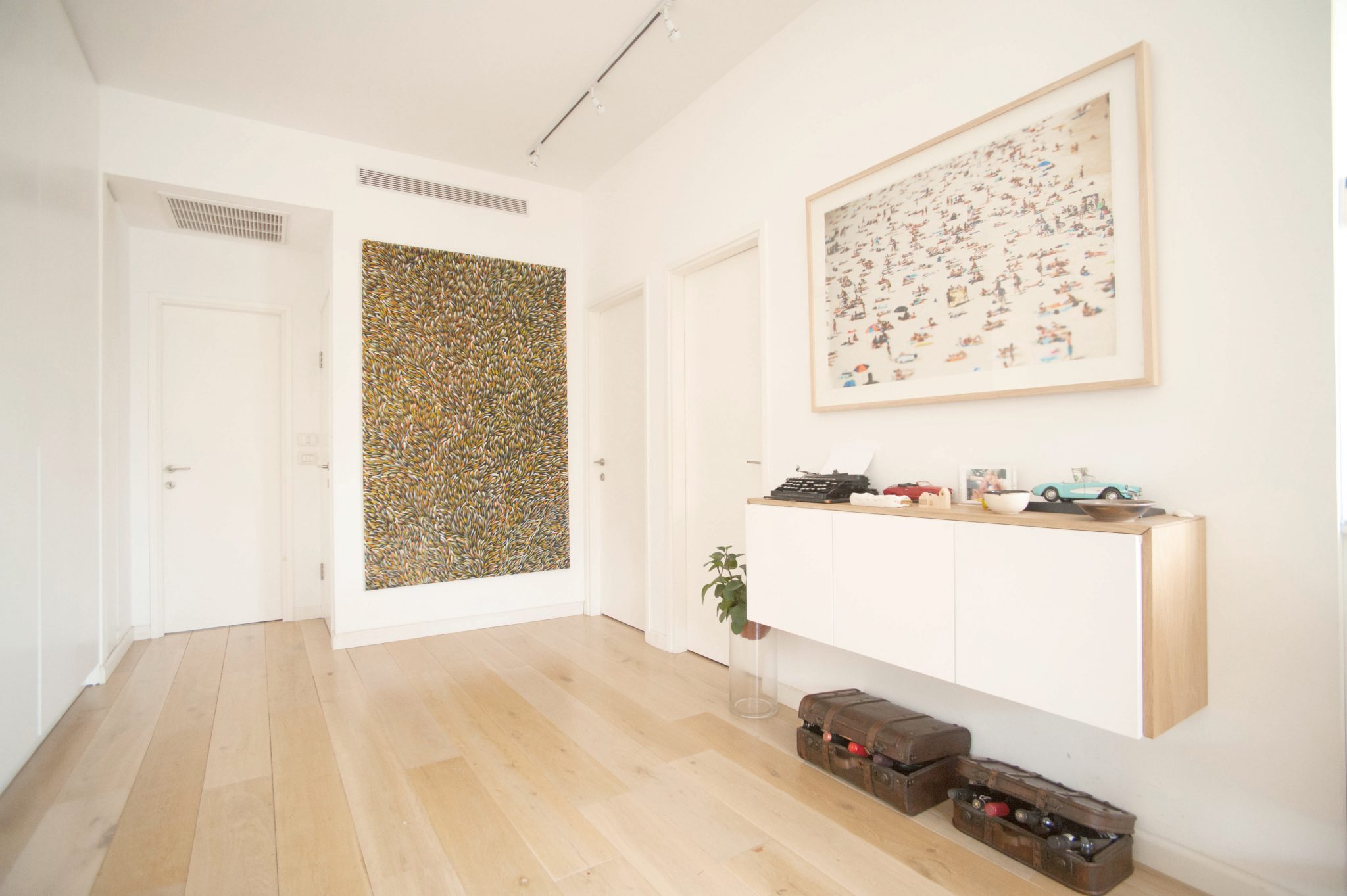 Nat and Tip help clients create homes and workspaces that they love, delivered either in person or online via Skype and email. Their business grew out of the blog apartmentdiet.com, which they’ve been collaborating on for five years. They’ve also created an online course that teaches people their Happy House Rules™ process: helping them get started, declutter, let go, and create homes they love plus systems that are easier to manage them with, across five weeks.

The next course starts next Monday 17 November 2014, just in time to get your space ready for guests to ensure a stress-free holiday period! Find out more.