Perched up high overlooking the ocean in Manly, this beautiful old home, full of character, was begging for a makeover and TV interior designer James Treble was the man for the job! But ‘Yuggawai’ came with a little extra pressure, having been built by the founder of iconic paint brand Taubmans more than 100 years ago.

Before you step inside, there is so much to talk about on the outside, from the original shingles and beautiful heritage details, to the addition of a balcony, new roof (which allowed for an extra bedroom underneath) and a very good-looking garage and staircase up to the house.

A big part of the brief was dealing with the front yard, that sloped steeply to the street with an unsafe and wobbly stone walkway and ageing steps, as well as a single car garage which was leaning to one side.

You previously couldn’t see the house very well due to large unkept trees. A huge new retaining wall allowed for the new double garage (which was so important for the narrow street) as well as a large storage area for bikes and a workshop. “Access to the house now wraps around this new garage, providing a generous wide standstone clad staircase that beautifully leads you up to the main house,” James explains.

George Henry Taubman, the founder of Taubmans Paint, built and lived in the home from 1908 to 1926. So restoring it to its former glory, while respecting the link to Taubmans, was no small task. “I think the Taubmans connection become a strong part of the dialogue of this home, not just because of the obvious association with the paint brand, but also because George Taubman was such a visonary, a true Aussie icon,” says James.

“He created a product and eventually a brand out of necessity, in search of high performing paints which he couldn’t find at the time. So yes, of course the paint had to be Taubmans for this renovation, and although there was some to and fro along the way, we managed to convince council of the modern take on the traditional colour scheme, which was 100% in keeping with the style of the home and its coastal location.”

The story of how the new owners, Gero and Joanne Farruggio, came to live here, is also rather special. Having always been a fan of polished concrete and ultra-modern dream homes, Gero first saw the house over a decade ago, while walking the dog. “It caught my eye and I recall thinking how nice it would be to own a house like this. It had so much character.”

Work took them to Perth for a few years but they were visiting Manly five years ago (as they missed it so much) when they saw the house was on the market. “We couldn’t believe it and bought it the next day, even though we lived on the west coast at the time. We hadn’t figured that part out, but knew somehow our home was in Manly. Some months later, after reading a quote from Martin Luther King ‘You don’t have to see the whole staircase, just take the first step,’ we dropped everything, moved back to Manly and figured we would sort the rest from there. It was a leap of faith. Little did we know there would be a few more of those in restoring the place!”

While they had hoped a new garage and a lick of paint would be enough, the couple, who have two young sons, soon realised they had a much bigger job on their hands. “The upstairs floors were so sloping, we would often go to bed and find all the cabinet drawers open; a little frightening around Halloween time! In parts, we could see daylight through the walls and roof! We thought the kitchen was fine and could stay, but when James first arrived, he spent an hour telling us how it had to go and what we could do with the space. We couldn’t bring ourselves to tell him!”

Although James is more used to working with brand new homes, he absolutely relished working on this very special family home. “I immediately fell in love with the house. It’s so unique, even the heritage architect commented on what a hybrid of styles it was. It was packed with features.

“I could also see that, over time, it had lost its way, particularly with the facade where all the features had blended away into a yellow and steel blue colour scheme. This home deserved to be brought back to life, and luckily the owners had the same vision!”

A lot of damage had happened over time due to a lack of maintenance, so repairing and replacing rotted timber posts, the front deck and the major issue of a leaking and sagging roof were top of the list. Inside, the flow of the rooms needed some work, in particular the link to the eighties extension at the rear. Here, a kitchen, casual dining and laundry were accessed by walking through the study (not ideal!). And upstairs, four bedrooms were served by one pokey, damp bathroom.

“Removing the aged roof tiles and the sagging timber roof trusses, allowed for new steel and timber beams. This provided the exciting option for a new large roof void, which is such a value-adding feature, and one which would never be cost-effective if it wasnt for the fact that the whole roof was being replaced.”

Accessing the roof void made space for an additional bedroom, so the smallest bedroom in the house become the new family bathroom. The fit-out of the new bathrooms, the kitchen and butler’s pantry, were all done in keeping with the style of the home. “The new finishes and Taubmans colour scheme all work together to complete the renovation,” James says.

“All of the rotting timber elements of this house were removed and replaced ‘like with like’, and this process included adding new cedar shingles to the front of the new large front verandah, beautifully linking the new with the old in a seamless way. Internally the access issue to the rear kitchen was achieved by knocking out part of the wall next to the fireplace, providing not only ease of access but also natural light to flood from front to back, which makes this home feel larger than ever.”

Removing dated carpet and ageing fittings and repairing all of the windows took a lot of time, but needed to be done. “One of the most exciting things was witnessing the removal of the carpet to reveal those original timber floorboards, which could now be retained and stained instead of covering them with new timber flooring.”

A real game changer was adding a brand new balcony to take advantage of the priceless ocean views. “This took some time to convince council, but with great communication came acceptance that this could be achieved without damaging the integrity of the existing home. By repeating the use of cedar shingles and then combining the timber balustrades for both the balcony and verandah below, the result is a wide and generous balcony which looks like it has always been there.”

The owners are, of course, delighted with the end result too. “Overall the project was about four years from planning to the final move in,” Gero says. “Like most things, there were struggles and challenges but time goes past very quickly. We were fortunate to have James in our corner, who made it fun, helped us laugh through the testing times and take all the stress away from selecting the finishes.

“Our goal was to restore the home to its former glory on the street. Our immediate neighbours have all modernised and we wanted to maintain the original character as best we could. The house looks brand new from the street thanks to the new coat of Taubmans paint, while maintaining its federation heritage character. I wouldn’t want to tempt fate, or use the term forever home, but I look forward to ageing with it.”

James adds: “The owners were always in love with Yuggawai and could see its potential. Working closely with them for the almost two-year journey has been a relationship of trust and a combined love for the home.”

He adds: “The amount of time and money these clients spent on this home when compared to building a new property on paper may not equate, but in value it certainly does. If you think about your suburb or that favourite one you like to visit, its character is a combination of the location, its natural environment and the homes there. The look and feel of the streetscape adds great value, and quality historic homes like this one become landmarks, helping to identify the location as unique and individual. These clients have already received knocks on the door from people wishing to purchase their home, but they are not going anywhere!”

Want to see more? Grab a cuppa and take the tour with James in the video below.

For more on James Treble 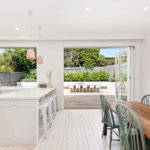 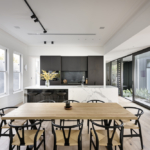 Chic Perth heritage reno a seamless blend of old & new
The heritage home with modern extension, is certainly not a new concept. Regardless of heritage restrictions, many a run-down old character home has been lovingly restored simply because people love… 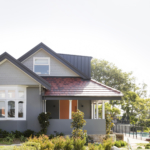 Sydney waterside heritage home gets mod white extension
Perched atop a hill with enviable waterfront views, Sydney home ‘Highcliff’ was originally built in 1904 but underwent an extensive renovation recently after it was purchased by Sean and Shelley…
FacebookPinEmailTweet