With bed linen, bath towels, cushions and throws, the Greg Natale Home range hit Myer Melbourne and Sydney stores recently and it’s a rather sumptuous affair replete with Greg’s signature geometrics and some interesting organic patterns too. We caught up with the designer to get the skinny on the collection. “I did a cushion range last year and the next logical phase was to create bed linen. I’ve got a real passion for bed linen and I’ve always wanted to create a range,” says Greg who thinks the bed is often neglected in the interior styling game. “For me, when I create an interior it’s really about developing a very cohesive, finished look and the bed always finishes off a room. A lot of designers neglect the bed but I’ve always paid special attention to it as the bed really is the final layer.” Until now, he’s always relied on custom made linen to fill the gap. 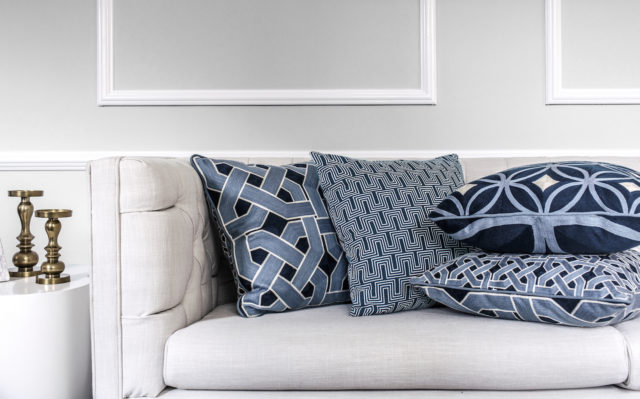 While the inspiration for the range has its roots in the Greg Natale brand DNA (think strong, repeated geometric pattern), the collection features organic motifs too. “Obviously my geometrics feature but they’re broken up with organic pattern including malachite and the dot prints,” says Greg who cites the malachite print as his favourite from the new range. “I love the Malachite collection because the organic shapes are different for me. I also love the towels as I think my Astoria pattern translated well into towels.”

Ultimately, Greg sees cushions and bed linen as an easy way to layer colour, pattern and contrast in a room. “You can replace them or rearrange them without any fuss whenever you want a new look and it’s a real thrill to be able to finally share these collections. It’s been a long time coming and I can’t wait to see how everyone styles them in their own home,” says Greg.