Briony and Cam Jones renovated their 1970s family home in Warawee, on Sydney’s Upper North Shore, in 2012. It’s built over three levels with three bedrooms and two bathrooms upstairs, the kitchen, dining, study, formal and casual living areas on the main middle floor and a fourth bedroom, laundry and bathroom on the bottom floor, connecting to the double garage.

They live here with their three daughters, Paris, Scarlett and Ivy. Briony started studying interior design at the Design Centre Enmore when she was pregnant with Scarlett. “Having recently left publishing after the birth of my eldest, I was pursuing my dream of working in interiors. Studying full-time with two young children was hard and there were many sleepless nights but most absolutely worth it. Once I had my diploma, I knew starting my own business and working from home would suit our family lifestyle best. I have been lucky and had residential jobs pretty consistently from word of mouth alone. The majority of my client relationships have started in the school playground!”

The home was bought at the end of 2011 and they hoped to spend less than $500,000 on renovations, which took around six months, but as with most projects, costs often blow out. They bought the house with the intention to renovate it and sell it at a profit within five years before moving onto the next project.

“As soon as we saw this house we could see it had great potential,” Briony says. “Not only was it a solid, double brick home, it had the right number of bedrooms, bathrooms and living spaces we were after to build a desirable family home in a popular family area in Sydney. We did not have to do any large extensions, which is where big money goes quickly. It was also a walk to the station and good schools, which always attracts families. But built in the 1970s, there was lots of exposed brown brick and lots of wallpaper.”

Briony, Cam and their trades pushed out the entryway to make it feel bigger and more welcoming. They added a study just off the entryway where there had previously been a small feature garden. They opened up the walls that were dividing the kitchen, family and dining rooms, changed most windows to timber and made them bigger.

“We built window boxes in the top three bedrooms as they were small and this made them feel instantly bigger with practical and stylish storage. We added a gas fireplace to the formal living room as this was a large room that needed some personality and wow factor. A pool was built coming off the entertaining area. You can see it from inside by looking through the floor-to-ceiling windows in the family room which is really nice.

“We rendered the outside of the house to hide the ugly brick colour and also where we had made small structural changes. And lastly, we updated everything from a cosmetic perspective: kitchen, laundry, bathrooms, lighting, flooring, doors and windows.”

In terms of surprises, Briony simply says it always costs much more than you first anticipate! “The biggest challenge was that when we started the renovation I was eight months pregnant with our third daughter and had our previous home on the market at the same time. We thankfully sold and moved in two weeks before I had our youngest. When we came home from hospital, the renovation was in full swing and we had no kitchen, no laundry, part of the roof off and an infancy concrete slab piled high with dust for a floor. It was full on but I look back and feel proud of how we lived through that as a family!”

Changing the front entry and adding the study at the front of house made the biggest difference in her opinion. “The façade now had a strong presence from the street.” The biggest bargains were the IKEA butler style sinks and taps in the kitchen and laundry. “Everyone that comes to the house comments on how great they look.”

The kitchen and outdoor entertaining area are Briony’s favourite features. “We added a large bi-fold window in the kitchen, which opens with a servery bar extending outside. When entertaining, I can be in the kitchen serving guests drinks as they sit outside on stools at the window. I get lots of champagne and coffee orders from here!” 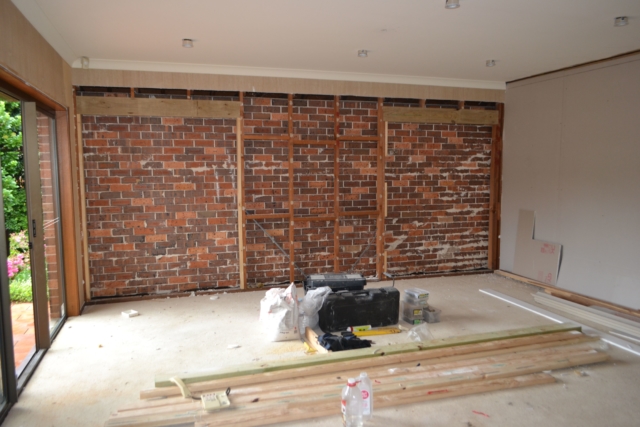 Her biggest learning was to plan ahead and buy ahead. “There are a few items I waited on purchasing until just before the builders needed them. In some cases, I feel I would have made better choices had I given myself time to think them through better! That being said, there isn’t one element in our home I don’t love.” Her advice for would-be renovators is to get three quotes on everything. “Start with a strong concept and idea of how you want the finished product to look and function. This helps make purchasing fittings and fixtures a whole lot easier. A moodboard of pieces you love is also a good start.”

Another top tip is to establish good relationships with your builders and trades. “I bake them brownies and make them a morning coffee. They are more willing to go that extra mile and finish things well if they feel there is a mutual respect.”

This was the family’s second renovation and they are currently onto their third. “Our first home was on a much smaller scale, size wise and budget wise. But we learnt a great deal and were able to use the profit made on that property to finance the next home. My husband’s father works in property development and is also an engineer. We couldn’t have done any of this without him and are now working together in these projects, flipping houses.”