For Anette, Matt and their 3 kids, living in Avalon was always the ‘end game’ or the suburb they wanted to find their ‘forever home’ in. While living in Normanhurst, the family of five would spend their weekends visiting open houses in Avalon in the hopes of finding ‘the one’.

It wasn’t until they came across a dated, brown brick house in need of some serious TLC that they knew that they’d found what they were looking for. “The old home was very dated, had its fair share of leaks and was crying out for a make over,” says Anette, “but the site had lots of potential and the position of the home on the site gave us scope to make the most of the northern aspect to the rear.” It was all about location and potential for the family, something the property had in spades and the family knew they’d found their new home. “We attended the first open for inspection and made an offer that afternoon!” says Anette. After – Front of house

While Anette and Matt had worked on renovations in the past together, this project saw them living on site as the renovations occurred around the family, something that certainly came with its own challenges. “We undertook the renovation in three stages because we were living in the house through the entire process,” explains Anette. “For a considerable portion of the build we had to walk across temporary pathways and/or planks to get from the front door to the cars. The kids loved it, but keeping them clean before school wasn’t always easy!”

To try and work around the needs of the young family, the reno began with the creation of somewhere to ‘call home’ for the duration of the project. After excavating the front yard to make way for the new home office and guest accommodation,  the structural works needed to complete the expansion of the existing garage occurred simultaneously. “This [space] was to become our living quarters for the next 5-6 months,” explains Anette. 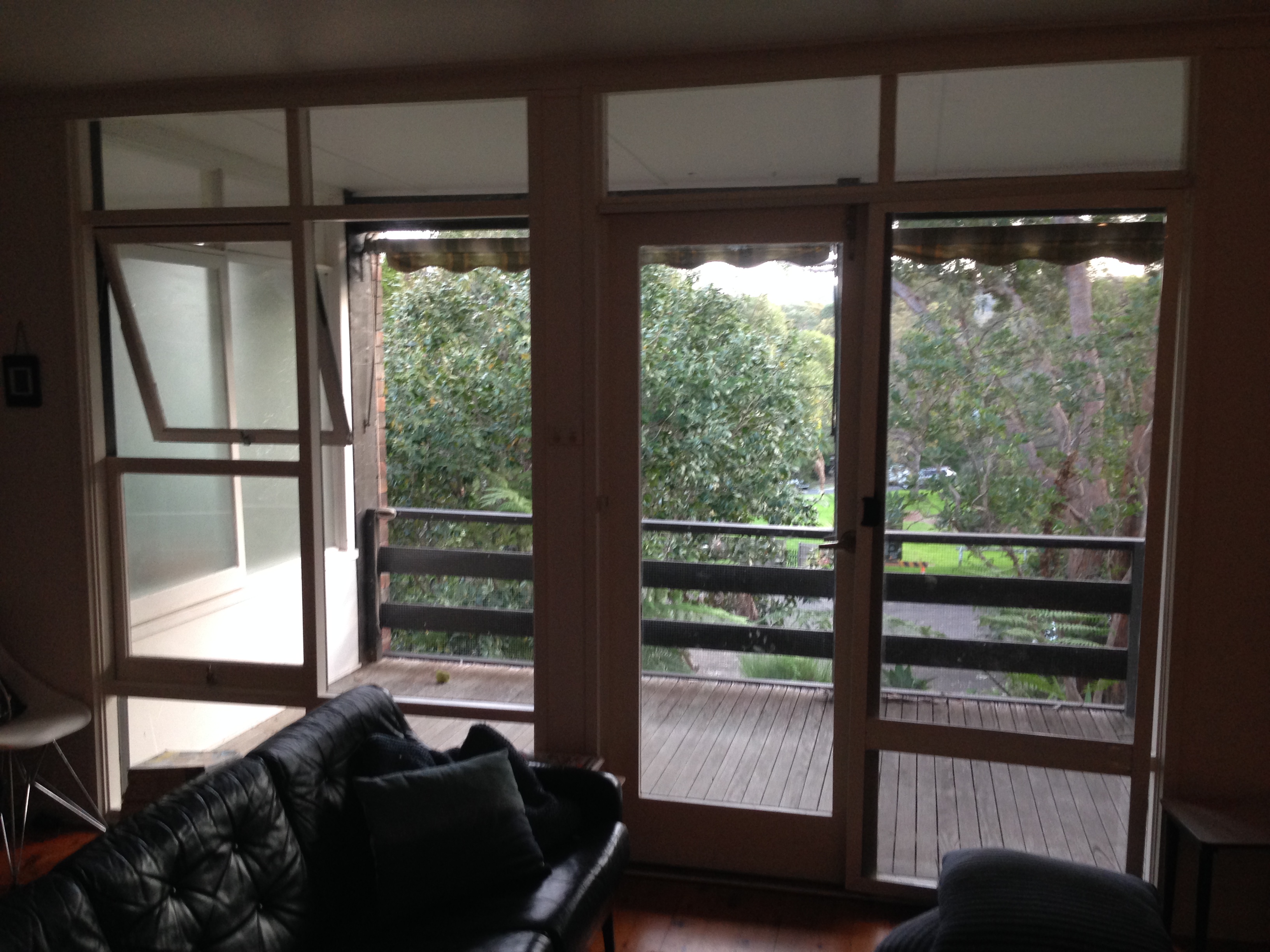 While the family shared a single room with en-suite, the rest of the reno continued full steam ahead, no thanks to the weather. “As soon as we started excavating the rain came. We experienced about 5 weeks of wet weather which slowed down the first stage considerably,” says Anette. The three existing bedrooms, bathroom and laundry were all demolished and the old bathroom and laundry space rebuilt as a single space providing a new, larger family bathroom. The three bedrooms were all re-built in essentially in the same locations but with some additional space and all with built in wardrobes. The back of the house was extended to provide a new casual living space and a new large laundry with direct access to the backyard and new outdoor shower. 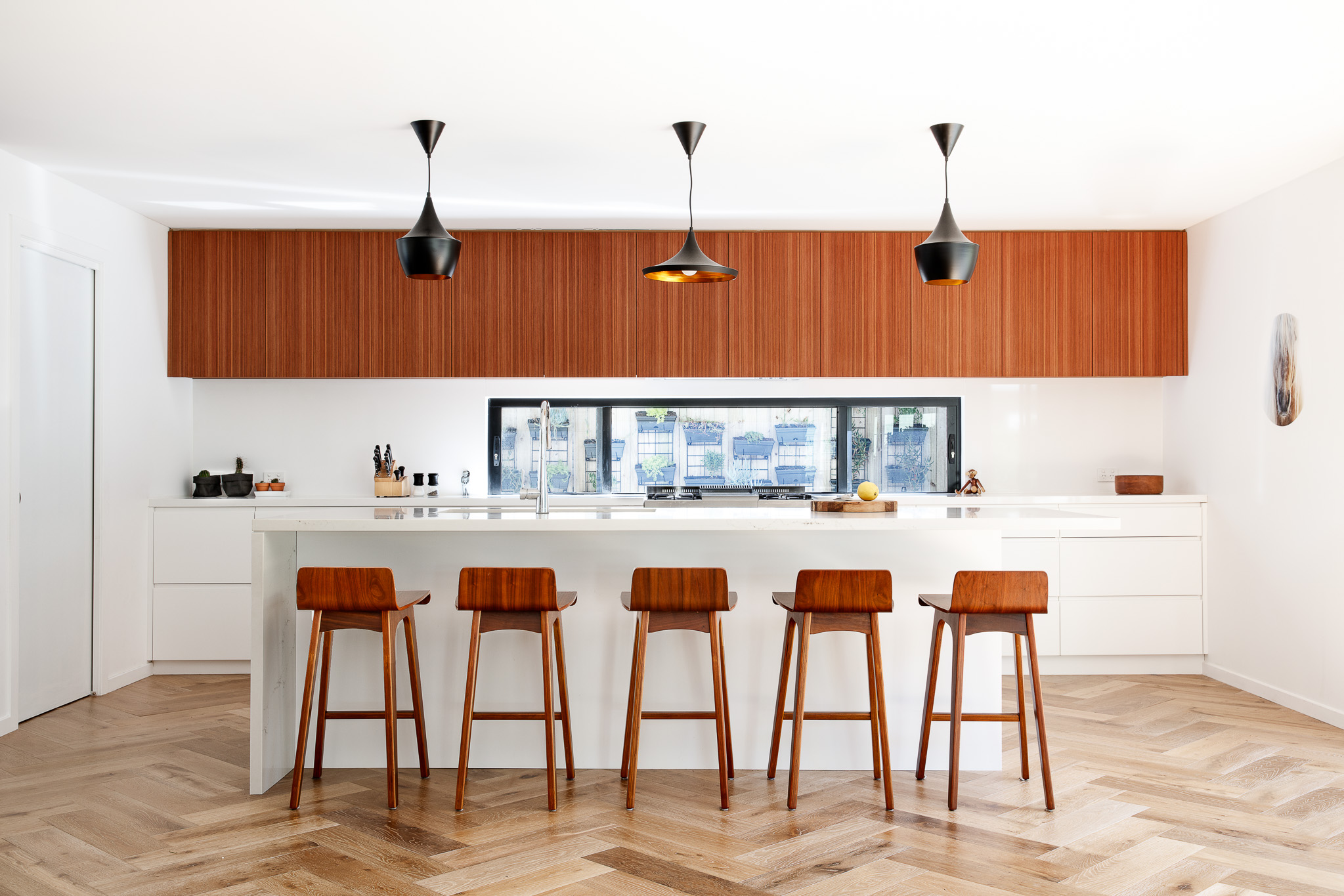 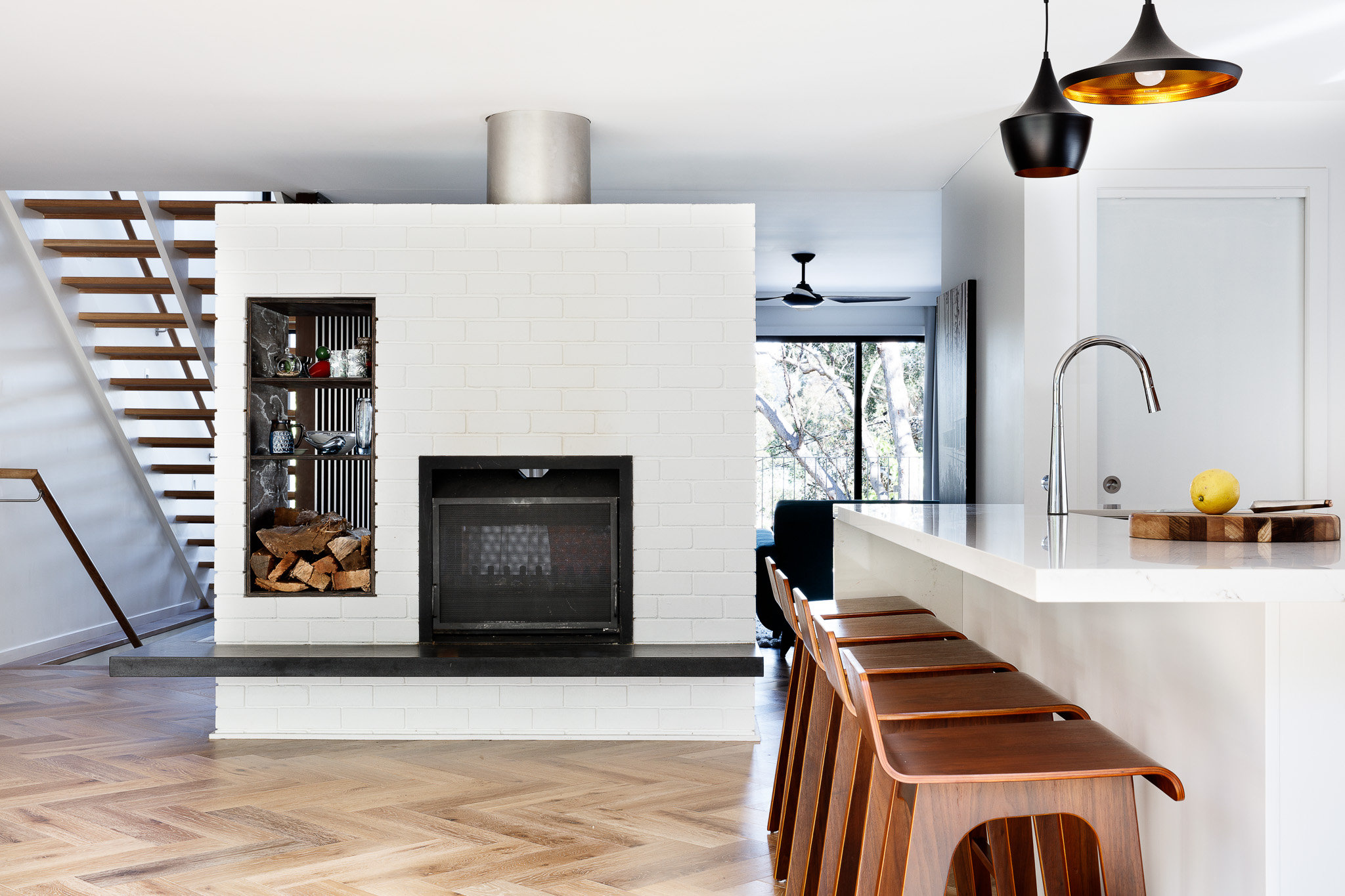 The final stage of the reno was the kitchen, dining and second living area. By this stage, the brand new bedrooms were liveable and the family was able to spread out a little more. Anette and Matt set up a camp kitchen in the new casual living room and laundry which became their new living space while the old kitchen, dining and living space was completely demolished. They extended up over this area to create a new open plan kitchen, walk-in pantry, dining area with a double-sided fireplace to separate a new second living area and a new tiled terrace at the front. 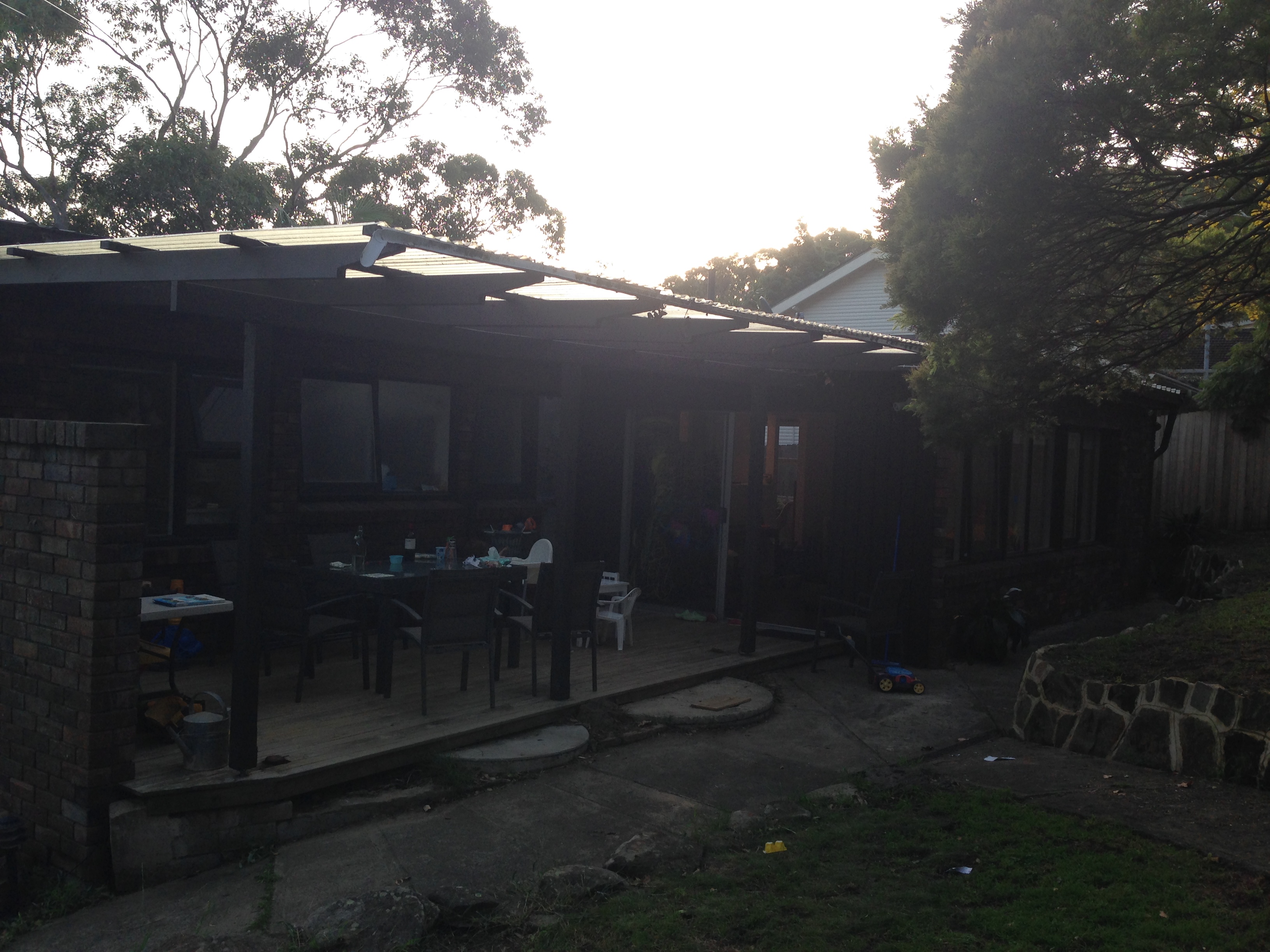 Before – Back of house 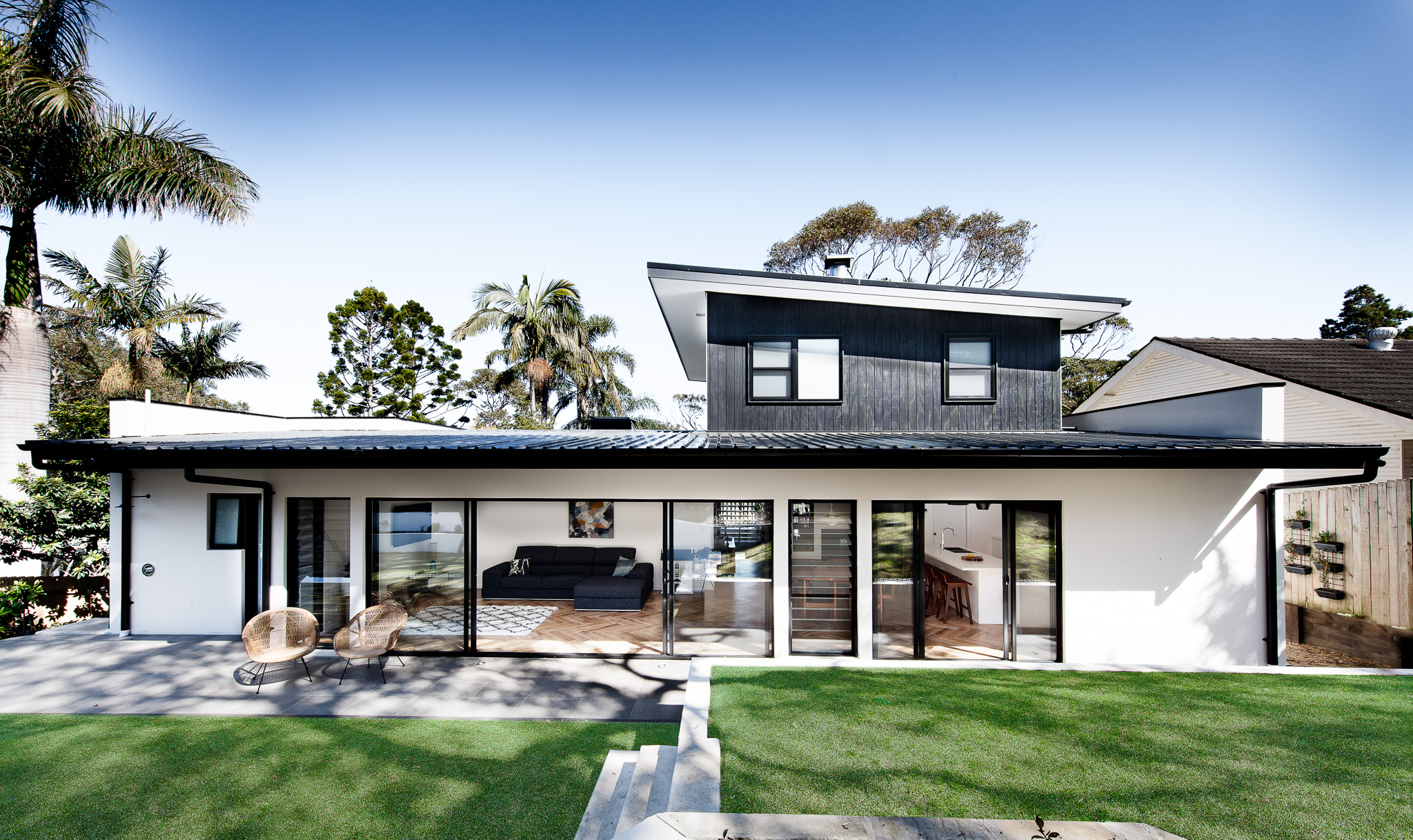 After – Back of house

The end result is nothing short of stunning and the family could not be happier with how it’s all come together. Although the practical elements of the reno have been life changing (no more leaking ceilings), the transformation of the house from dingy and dark to flowing and light filled has made the biggest difference. “The flow of the living areas and connection with outside have made living in the house as good as we could have hoped.” says Anette. “The old house was pokey and dark. Now we are flooded with natural light and are able to collect the breeze no matter which way it is blowing by using the louvered windows and glazed doors.”

The couples advice for future renovators? “Nail the look you are after before you finalise the layout and trust your architect with this information,” agree both Matt and Anette. “We used Pintrest and the web to find and create mood boards that we were able to share with our architect and he nailed it!” They also recommend thinking about living elsewhere while undertaking a project as massive as this one!

For more amazing Real Reno’s check out our archives!