When Aaron and Sarah Waters purchased a tired 1970’s brick and tile home with the intention of giving it a quick flip, little did they know they’d found their next passion project. “The original thought was to do it up and sell it – not spend much and basically put it straight back on the market. However, we fell in love with the area and once we started we fell more and more in love with the house too,” says Aaron of the home that is referred to as the Bilinga Beach Abode.

Set in the seaside town of Bilinga on Queensland’s Gold Coast, the original 1970’s build was comprised of red brick, a yellow Colorbond roof with black gutters, asbestos walls and an asbestos fence around the perimeter. The home also had three bedrooms and one car space but has since been transformed into a comfortable 5 x 2 – the expansion driven by Aaron and Sarah’s expanding brood. The couple have a six-year-old boy Brax, three-year-old girl Frankie and a baby girl due next month.

The home takes design cues from its coastal location combined with a smattering of Palm Springs inspo and features plenty of white – Dulux Vivid White to be exact. “We found a house in Cape Town, South Africa that inspired the feel we wanted. I think that once you have found a style you just have stick to it and for us, it was a coastal Palm Springs vibe,” says Aaron. The home certainly has aesthetic consistency throughout (the white paint for one) and it’s something that Aaron is focussed on. “Once you transition, or your mind wanders, you will find yourself lost and the home can lose its soul,” says Aaron.

A prominent design feature, the home’s breeze blocks were brought in from Sydney and are multi-purpose. “The breeze blocks are not original. The idea behind them was, of course, some breeze but foremost their style. Another benefit is the shadows that they form at different times of the day,” says Aaron.

As for renovating with young children, Aaron saw the challenge as an opportunity and got them involved too. “It was hard at the start but the children love it now. Our children watched Dad work and they wanted to work. Out came a plastic kid’s tool belt and I would hand them a small, soft piece of wood so they felt part of it,” says Aaron.

The eldest child, Brax, is no doubt the envy of his school friends given he has his very own skateboard ramp at home. “The skate ramp came about because we took Brax to the local concrete skate park and it was crazy. There were kids everywhere and it was just so dangerous that an accident was bound to happen, but Brax just loved it. We didn’t want our little boy to get hurt, and we didn’t want to take something he enjoys off him, so we built a ramp at home,” says Aaron.

And unlike most children’s toys, the ramp only seems to add to the relaxed beachy vibe of the place – Venice Beach anyone? “We wanted it to tie into our house and basically blend in. We built it from scratch and have to regularly maintain the painting to give it life, but the kids absolutely love it,” says Aaron. 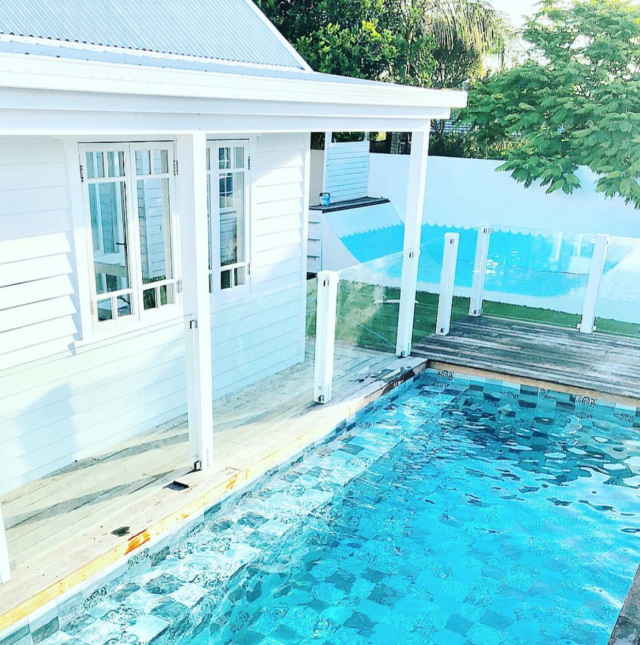 Another fabulous feature is the home’s pool – it sits adjacent to the property and is lined with patterned concrete encaustic tiles. “It was designed to have all day sun and face north west to take in the amazing sunsets. The kids love it and so do we. You basically step out of the lounge room and into the pool and you can see it from our kitchen so there aren’t too many blind spots. We also have an outdoor chimney fireplace that looks over the pool,” says Aaron.

Follow Bilinga Beach Abode | Check out our other renovation stories