With the Scandi trend having endured for so long, it’s fair to say that we’ve been in the grip of light timbers for some time now. Which is why it was so nice to come across this Brisbane renovation and its dark, chocolatey timber accents. Rather than simply painting over the home’s original dark timber (as so many heritage renovations do), architect Allison Smith, of Studio 15B, made a feature of it.

“The existing house had original dark stained timber windows, doors and trims and we were drawn to these aspects,” says Allison Smith of the 100-year-old Queenslander that is at the centre of the home’s recent renovation. Not only do dark timber stairs help connect the old and new areas of the home but dark joinery elements were included throughout to create a cohesive whole.

Most notably, a dark stained timber tongue and groove clad feature wall runs from the home’s entry and wraps around into the dining area; it’s a stylish reference to the home’s original VJ panelling. “These dark touches helped to tie the interiors together while blending original and new elements,” says Allison.

Located in New Farm, the overhaul of this home wasn’t exactly straightforward; the original home was raised and renovated, before a brand new level was built underneath. The new parts of the home are on the lower level, and there’s new small extensions to the side and rear.

“It sounds difficult and it’s not without its challengers, however it’s very common with old timber Queenslander homes so it’s a well oiled operation. It’s a great way to significantly increase the area of a home without increasing the footprint and taking up too much of the site,” says Allison.

Located on a sloping site, the ground floor sees visitors step down into the rear of the home with high ceilings an added bonus of the new design. “The slope created high ceilings in the kitchen, living and dining areas. A 4.2 metre ceiling height was achieved in the living room which allowed for a striking wall of glass that overlooks the landscaped rear and pool.”

As for the home’s owners, they had lived in the original abode for many years and while outgrowing it, didn’t want to move. “They loved living in the street and saw the value in a complete renovation that would service their needs and growing family for the long term,” says Allison who was tasked with designing a flexible family home with separate zones for the home office, entertaining, guests and family needs.

“One of the main goals was to design the home in a way that did not create the feeling of two separate houses – old and new.  The new areas needed to blend with the old, retained fabric in a contemporary way,” says Allison of the home that had last been renovated in the 1970s.

“We are proud of the way we have achieved the many brief requirements on a small lot, while still paying homage to the original home. The result is a home the clients will utilise well into the coming years.” 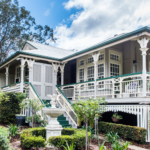 This renovated Queenslander is giving us all the feels
You know you’re looking at something special when a property has its own name. ‘Pen Y Llechwedd’ is a stately 104-year-old Queenslander, located in Ipswich, that was renovated recently resulting…
FacebookPinEmailTweet