Standing on just 20 square metres in inner-city East Melbourne on a 5×4 metre block, the 5×4 Hayes Lane Project’s commitment to environmentally sound, sustainable design can be seen in the way it was designed, built and now functions. The home’s owner builder Ralph Alphonso built it on a site that used to house an old shed adjacent to his former home. “The house is down a laneway that is adjacent to a property that I own. It was a remaining parcel of land that I subdivided and the old parcel of land dictated the size of the building,” says Ralph. Building to the boundary on three sides, with 900mm on the fourth, Grand Designs Australia referred to it as a ‘mini skyscraper’ when they featured it in their sixth series. 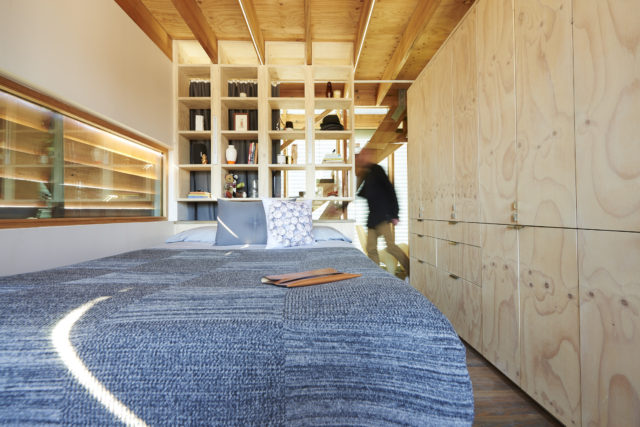 Plywood cabinetry chosen for its eco-credentials

“I wanted an efficient house that was built in a sustainable manner but was liveable too. I didn’t want to live in an eco-house that wasn’t functional for everyday use.” The home was built with products and materials that used minimal energy to produce, constructed from hardwood timber offcuts that would otherwise have ended up as woodchip. “The offcuts are glued together to form an even stronger material,” says Ralph of the home that operates entirely on renewable energy – most of which it produces itself.

“The solar panels on the exterior of the building generate about 19 kilowatt hours of energy per day in summer which is a substantial amount of electricity for such a small site. We’re going to have battery storage soon so we’ll be storing power on site and will probably generate more power than we use and put it back on the grid,” says Ralph. The lounge that transforms into a dining table

For those of you wondering about any feelings of claustrophobia, floor to ceiling glass on one side and myriad windows on the others really work to reduce the feeling of enclosure. “Also, exposed ceilings increase the height above your head which makes the rooms feel larger too. These were subtle, design-driven choices made to help make the home feel larger internally,” says Ralph. With small internal spaces, the rooms are designed to be multi-purpose with furniture created accordingly. “The sofa turns into a dining table and its foot rests become stools. There is also a TV that pops up and hides away which means it doesn’t obstruct the home’s city views when not in use,” says Ralph. 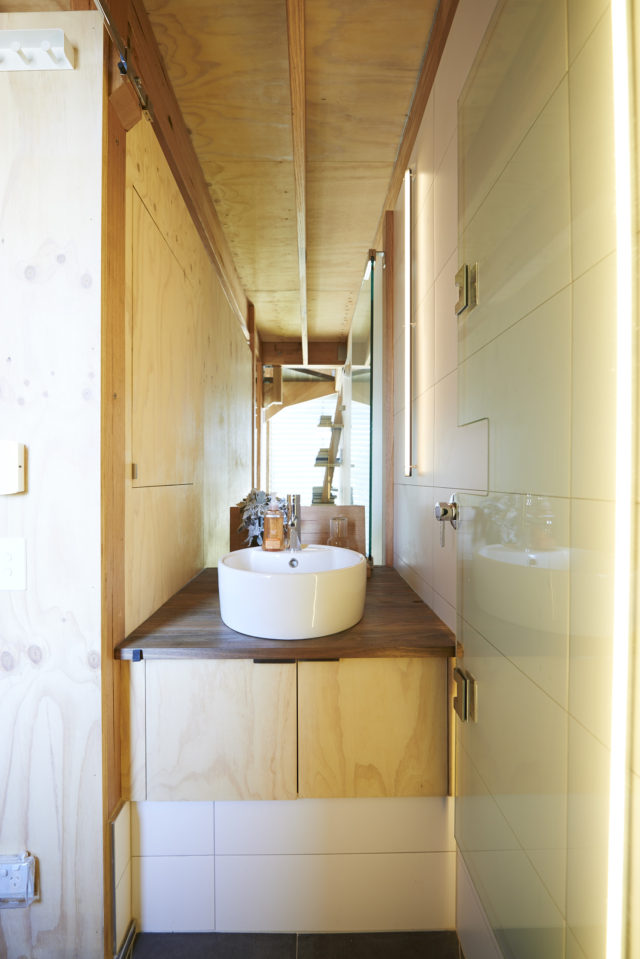 “We like to think of the building as an exemplar of what can be done. We wanted to show that sustainable design can be liveable and built on a small footprint. Sustainability is also about urban in-fill and using pieces of land that aren’t being used,” says Ralph.

The home is open as part of this year’s Open House Melbourne which is taking place on 30 and 31 July. The weekend puts a spotlight on the unique spaces and places that form the foundation of the city, providing an opportunity for you to consider what makes Melbourne unique. It showcases buildings of significance in a free and accessible format so everyone can experience the value of good design and architecture, and consider what makes a liveable city