So, here we are with season 13 of The Block’s first room reveals! To be honest, I wasn’t loving any of them and thought the judges were very kind, that said, it is week 1 and they only had 48 hours, so we can’t expect masterpieces. Yet!

The stakes were high because depending on how well they did, the couples got to choose their preferred house from the five 1920s California bungalows.

So, here’s how they did! What did you think?

Older (read mid-40s!) Perth couple Sarah and Jason, a nurse and a plumber, came in third. Their Myne by Prudence Caroline artwork was gorgeous but personally, I didn’t feel the room pulled together very well at all. But what do I know?! Shaynna criticised them for pulling out the period features people buy these kinds of houses for. But Neale was kinder, saying the room had come together really well.

But can we please talk about the state of that rug and the creased bed linen?! I hope it’s true that the room in reality was better than these photos! 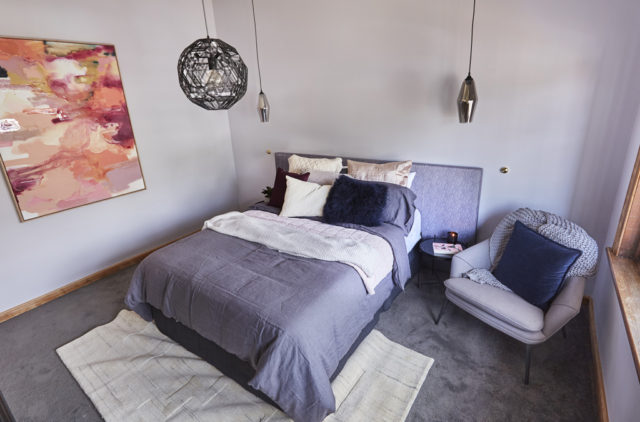 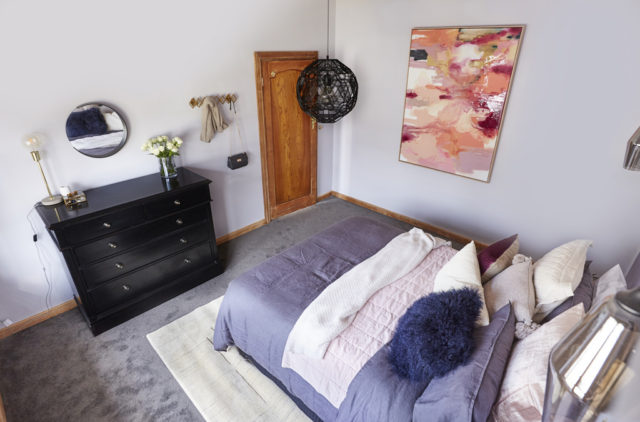 This pair came first, which is just the start of the drama, as this enabled them to get their first choice house, house 3, and all the goodies that came in the mystery safe (vouchers and cash). They also got to take the same amount they spent on their challenge room from another couple’s budget. Poor Elyse and Josh did not take the news well, and Georgia wasn’t too happy with their reaction. Well, you’d hardly expect them to be delighted but the tension was 100% clear! Eek! Tears already!

Back to the room, which turned out well, if a little too grey for my liking, despite the floor-sanding disaster and eventual carpeting. Neale liked the ceiling rose with the modern pendant and the cornicing. He said it was a great balance of heritage detailing and contemporary flavour. Shaynna said the lighting could have been better planned as the pendant was offset to the bed. 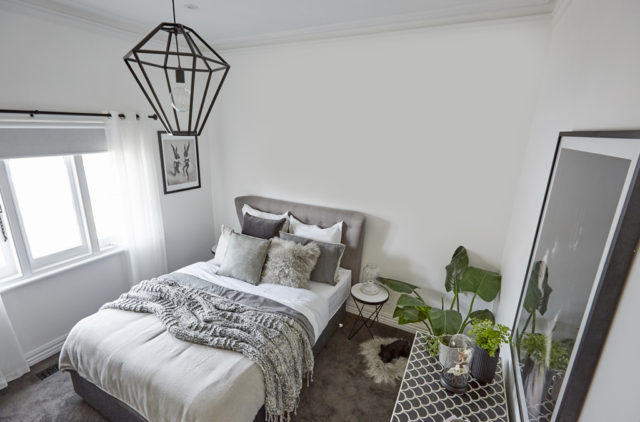 I really liked the wardrobe! 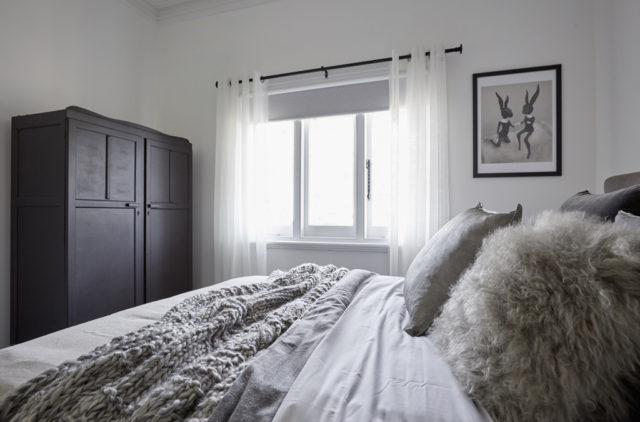 I think I liked this room the best, although agreed with Shaynna they should have left some period details behind! Darren said it was very Blocky! But Neale said more like it belonged on The Block in week 5, 6 or 7. Darren said the floor had come up a treat. Didn’t it just? I’d seen enough carpet! I admired the fact they tried to do something different, even if I didn’t love that feature wall colour. Bless them! I’m just going to love this pair, especially Wombat! What a character! I love what they did with the bedhead even though I don’t think it suits the house at all! The less said about that armchair, the better. Darren walked in and straight away said two blokes did this room! Correct! Shaynna said it felt very eighties but Neale said even though the room 70% sucked, the remaining 30% was gold and he was intrigued to know more about the people behind it! 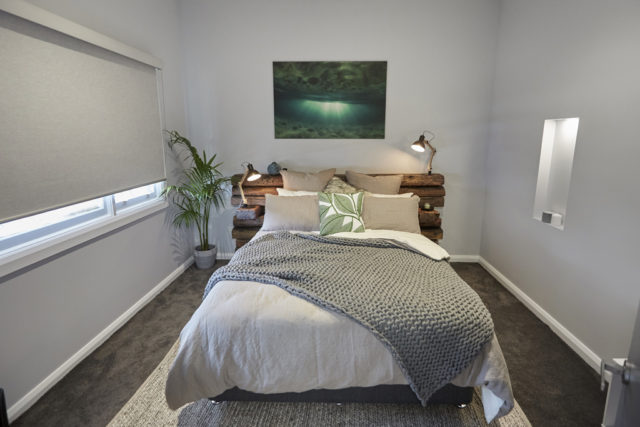 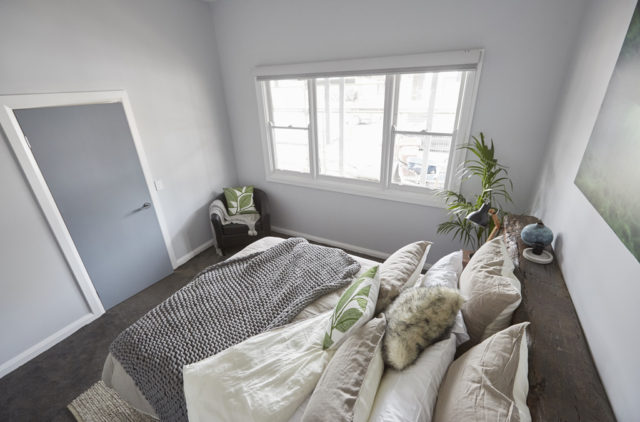 A mixed bag of reviews for this room, which came last. Darren said the cornice was lovely and the wall colour pretty, but everything else was lacking personality. Shaynna said it lacked soul because it was trying to be perfect. Darren said it lacked a big ticket item for a focal point but was still a very strong start. Neale said he hoped they wouldn’t be as safe next time. 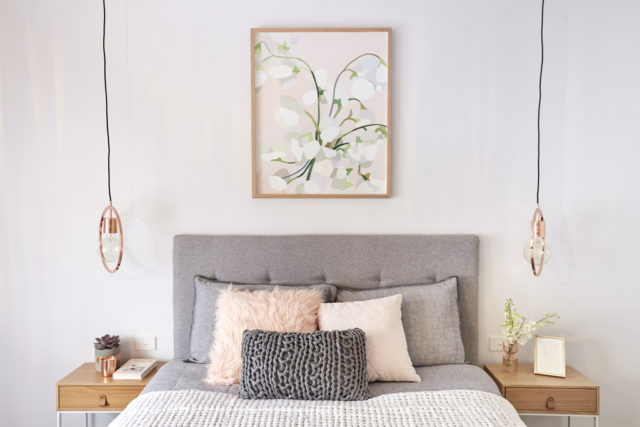 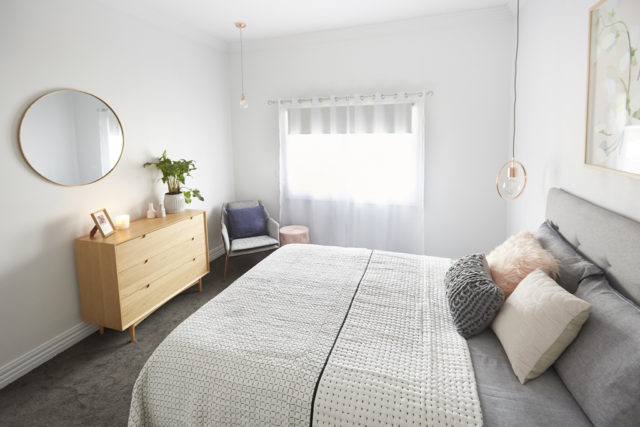 The episode finished with us seeing how they got started on the next challenge: the main bathroom, which they’ll have a week to complete. A big call! Clearly, there’s going to be a lot of drama, but we wouldn’t have it any other way, would we?!

I can’t wait to see what they do. We’ll be bringing you each and every room reveal, as always!

Fancy giving The Block a go yourself? Pop back later today for some top tips from the man who is responsible for casting the contestants!