When Claire Falkiner lost her job as a textile designer just days before the Christmas of 2013 (and two weeks after her husband lost his!), she decided to look at it as a blessing, not a curse.

Seeing it as a time to get creative, she picked up her paints and started designing. And the end result was a large artwork of a colourful headdress. “I didn’t really like it and shoved it straight under my bed,” explains Claire. “But then my friend came over and saw it poking out and said: ‘That is awesome!’ I said: ‘You can have it if you want?’ So she framed it and I saw it in a different light. Then one of her girlfriends wanted one so I made one for her.” And as they say, the rest is history! 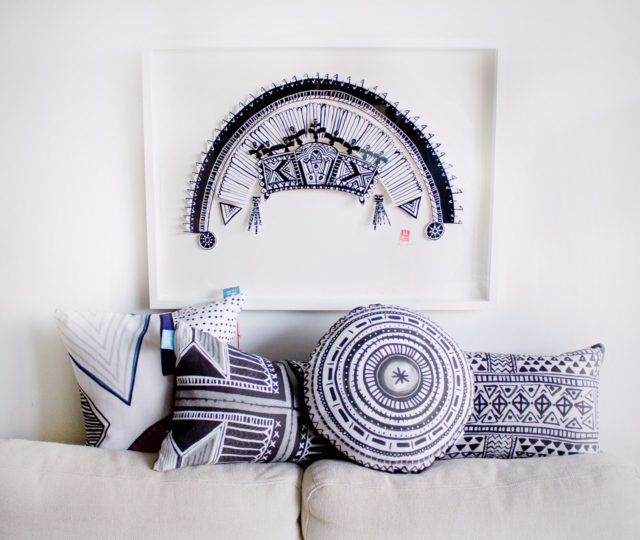 Now working under her business Merci Perci (named after her too-cute rabbit!), Claire’s work is stocked in stores across Australia. Her headdresses are of particular success, with the brightly coloured, pattern crazy one-offs being made from paper. “They take me about four-to-five hours to complete, from marking out the design on watercolour paper, to painting it — I use acrylics and gouache depending on what I want and then I use Posca pens and watercolour – to cutting it all out and then mounting it. I mount them on foam core to make them three-dimensional.”

Inspired by a photo she saw of a man from Papua New Guinea, Claire immediately fell in love with the colourful headdress he was wearing. “Papua New Guinea have some of the most incredible birds in the world and the tribes make these beautiful brightly coloured headdresses from their feathers. I wanted to buy one, but they’re hard to get yours hands on, so then I thought they’d be cool to be made out of paper.” 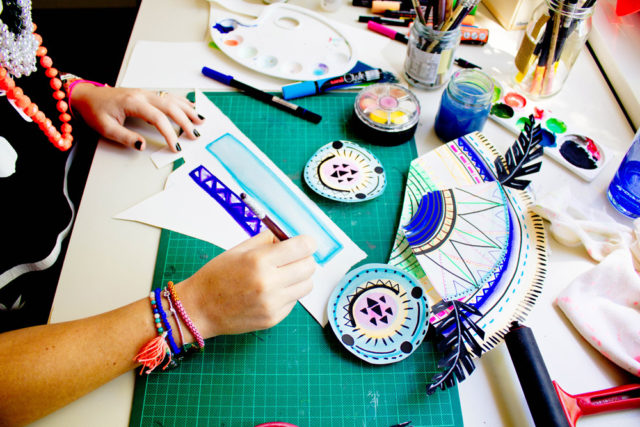 Alongside her headdresses, Claire creates little angel and monster artworks, which are in the same style only smaller. However, it is her latest venture she is particularly excited about, with her artistic style being transferred to textiles in the form of a cushion range. “With my textile design background I thought I definitely needed to create some cushions. They’re all very brightly coloured and heavily patterned which is what I like to do. Most of them are made from 100% Russian linen, however there’s a limited edition range that are linen on the front and leather on the back. I have a gorgeous soft silver leather and a very small amount of gold.”

Yet Claire’s not stopping there, seeing more big things for Merci Perci in 2015. “It’s currently a bit of a pipe dream but the next thing I want to do is a collection of ceramic art plates. I thought how nice would it be to bring back those nana plates on the wall but in cool patterns, and also have them be functional.” 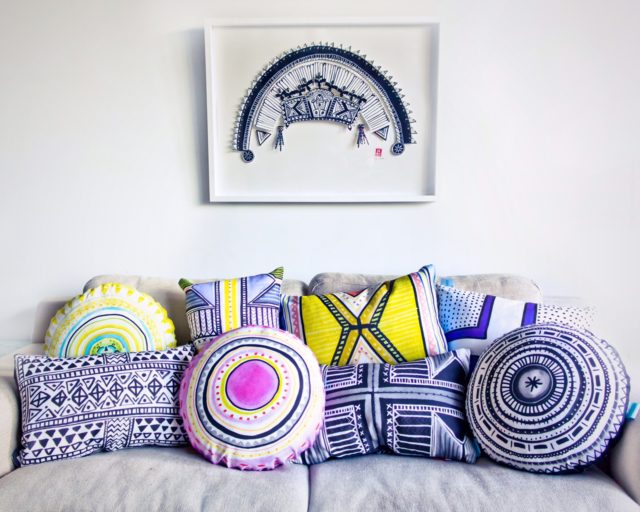 With it not being all that long ago that Merci Perci was just a passion side project, Claire still cannot believe it is her full-time job! “I never thought it’d go anywhere, but rather saw it as a fun excuse to get my paints out again. But now it has actually become something. It still blows my mind!”