This time last week, an amazing and heartwarming charity project started in Glenmore Park, NSW. Build For A Cure will see a four-bedroom house built and fully furnished in just 21 days. Everyone has donated the labour, materials and furnishings for free and when the house is auctioned, all the money will go to the Children’s Cancer Institute. Amazing, huh? and the progress so far in week one is incredible!

It’s the first ever Build For A Cure as part of International Childhood Cancer Awareness Month. The home will be auctioned on 26 October and proceeds will go to the Institute to fund vital medical research to find a cure for childhood cancer.

The lavish four-bedroom, two-bathroom ‘Havana One’ home is being donated by McDonald Jones Homes and built in partnership with Austral Bricks. It will sit on 500 m2 of land in Glenmore Park donated by Wearn Brothers Group and will be sold fully furnished by Freedom, with kitchen and laundry appliances by Electrolux and home entertainment by Panasonic. All real estate services are being donated by PRDnationwide Penrith and the home will be auctioned by The Block celebrity auctioneer, Damien Cooley. 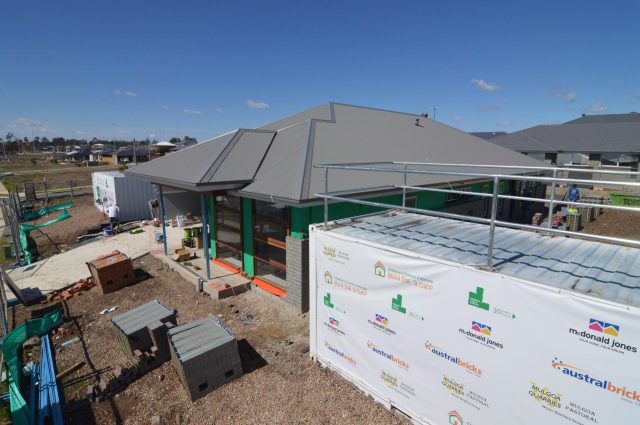 The Block’s Scott Cam, a McDonald Jones Homes ambassador, is lending his support to the project, along with the show’s 2012 winners Brad and Lara Cranfield and stylist Jason Grant.

With its labs first opened in 1984, Children’s Cancer Institute not only conducts medical research to find a cure for childhood cancer, but also ways to improve existing treatments and reduce the suffering long-term side effects can bring. The Institute is now excited to be embarking on a program of personalised cancer treatment that will see it centrally involved in guiding cancer care for high-risk children at paediatric hospitals throughout Australia.

“As we celebrate 30 years of medical research, we’re more determined than ever to put an end to childhood cancer,” said Prof Michelle Haber AM, Executive Director, Children’s Cancer Institute. “As the only independent medical research institute in Australia wholly dedicated to childhood cancer, our role is vital – because even with the current survival rate of eight out of ten, childhood cancer still kills nearly three children every week. I am blown away by the generosity of our partners who are making this happen.”

You can follow the Build for a Cure journey here and donate at, or buy a $2 token at participating Big Ws throughout September and Woolworths Petrol throughout October.

Here’s a video that shows you a little more about it: