Bricks really do seem to be having a moment. After decades of rendering over them, suddenly there they are, in all their exposed glory. And when it comes to this Sydney coastal home, designed by Renato D’Ettorre Architects, there’s no denying that bricks are the star of the show. 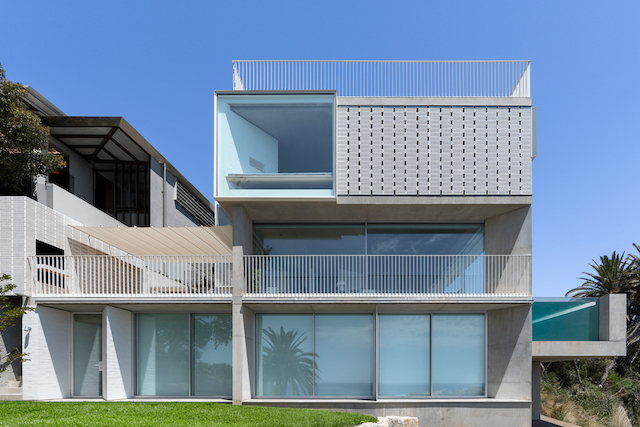 “This house embodies the spirit of seaside living in response to a magical site on the ocean, and a steep rocky coastline with an ideal north-east aspect,” says Renato of the home that, rather than opting for a ‘look at me’ aesthetic uses layered materials to an understated end. Key elements of the design brief include a space for the children to socialise, a cellar, music room and small gym – all of which feature in the abode that is home to a busy young family of five.

“It would have been easy to treat the ocean as the only design influence but that would have been one-dimensional,” says Renato who found unlikely inspiration in the Italian countryside, of all places. It was on a visit to his Italian home in 2010 that the architect spotted a hay barn that was wrapped in perforated terracotta bricks that allowed air to pass through, yet kept the hay dry within. “The simplicity of the rectangular shaped barn in an open field left an indelible memory which became the conceptual basis for this house,” says Renato. 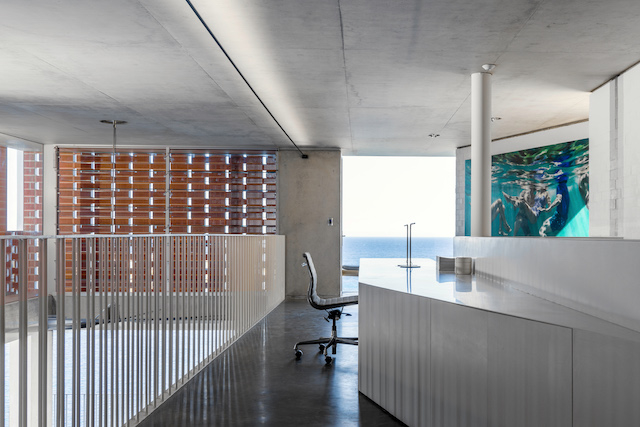 When it came to sourcing the right material with which to create his vision, Renato looked to PGH Bricks who devised a bespoke brick solution. The unique bricks are made of light terracotta clay and feature a clear, brilliant white glaze on the reverse, designed to blend seamlessly with the white painted brick walls that form the exterior. “The glaze is designed to scintillate under sunlight, just as the ocean scintillates in morning sunlight,” says Renato.

As for other challenges, excavating the site turned up more sandstone than had been initially anticipated. “This instigated a floor plan re-design to bring the natural beauty of the sandstone into the interior and to benefit from the sandstone’s cooling properties in the summer months,” says Renato of the design feature that is no doubt one of the key talking-points of the home.