“The original home was a tiny pre-1946 cottage that was literally falling down,” says Letitia Ellis of her recently renovated home in Brisbane that was stripped right back and elevated to create a double story home that is almost unrecognisable from the original.

“I lived in the original home for a few years prior to the renovation as it took a few applications to get the renovation approved. Brisbane City Council didn’t want the facade changed so the original house was raised and the original front door was replaced with French doors that open onto a front deck that captures the city views,” says Letitia who runs her own interior design business, Letitia E Designs.

With demolition out of the question due to heritage protections, Letitia set about transforming the original home into a light-filled, expansive Hamptons-inspired space that combines traditional and modern elements. “I wanted to create a modern, open plan Hamptons inspired home that considered and blended in with the typical Queenslander style of the neighborhood. I also wanted to include standout design elements, whilst ensuring the overall modern design could stand the test of time by not relying heavily on current passing trends,” says Letitia.

The new kitchen is a highlight and the large set of stairs beside it catch the eye too. “The stairs had to fit into a really pokey space so the decision was made not to go with typical Hamptons style sawtooth built-in stairs but rather go with light and airy – so they are not closed in at all,” says Letitia.

The bathrooms are another great example of Letitia’s skill in combining old with new. Large grey concrete-look tiles and white hexagonal feature tiles are typical modern bathroom fare, but it’s the Shaker cabinet doors that make the difference.

“The three bathrooms take on a more modern design with concrete look tiles that were chosen to withstand the mess that three boys make – there isn’t a white or light coloured tile in sight! But to ensure that the bathrooms matched the more classic Hamptons style of the kitchen and scullery, the same cabinetry was used,” says Letitia.

Other classic elements include wainscoting and pressed metal. “Handmade pressed metal tiles were used in the scullery and laundry,” says Letitia. 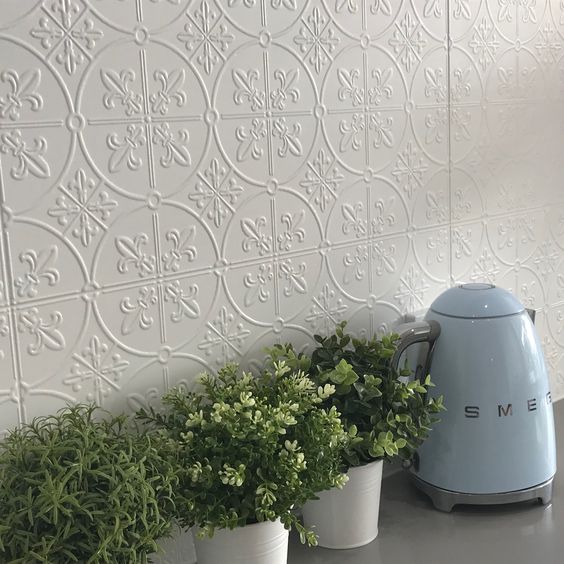 For more | Another renovated Queenslander