With a four year-old, two dogs and a cat, interior designer and The Block judge Darren Palmer knows a thing or two about keeping his home looking stylish and organised but still, of course, fun! 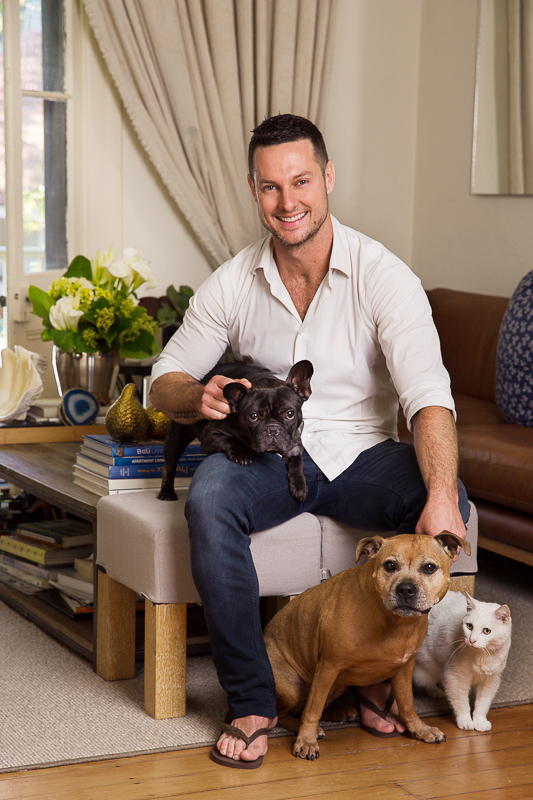 I was lucky enough to have a look around his new Paddington home recently. Although he has some ambitious renovation plans for the future, its character features mean it’s full of charm and warmth. Great bones! 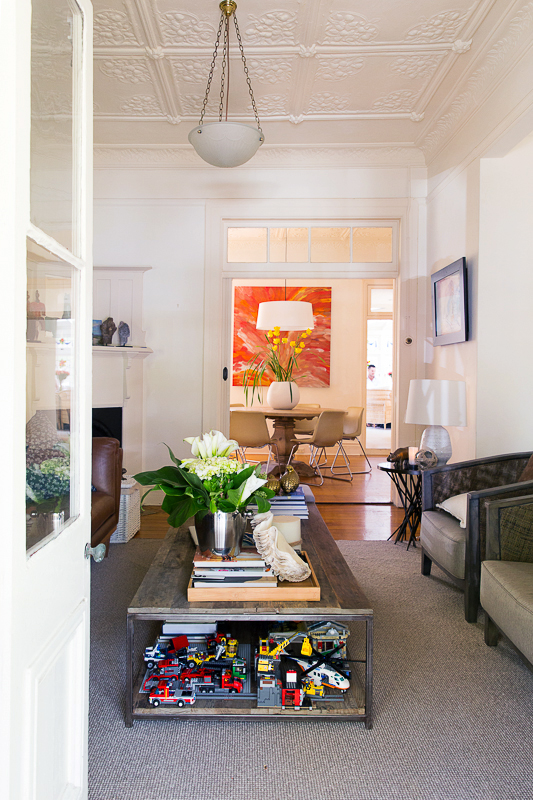 Dogs Doris and Pepi and Charlotte the cat follow Darren around like Dr Dolittle and son Hugo’s lego can be seen peeking out from under the coffee table, but this is not a home full of plastic or mess and there’s definitely no doggy smell. So, I sat down with Darren and asked him how he does it and if the house is always so suspiciously tidy?

It’s all about buying things which are durable and washable and not being too precious about anything. “Your sofa, for example: have something you can clean, or remove the covers and wash. Our tan leather one is fantastic because that’s a material that just gets better with age and wear,” he says. “If I spill something on that, it’s just a quick spray ‘n wipe! It’s a great choice if you have pets. 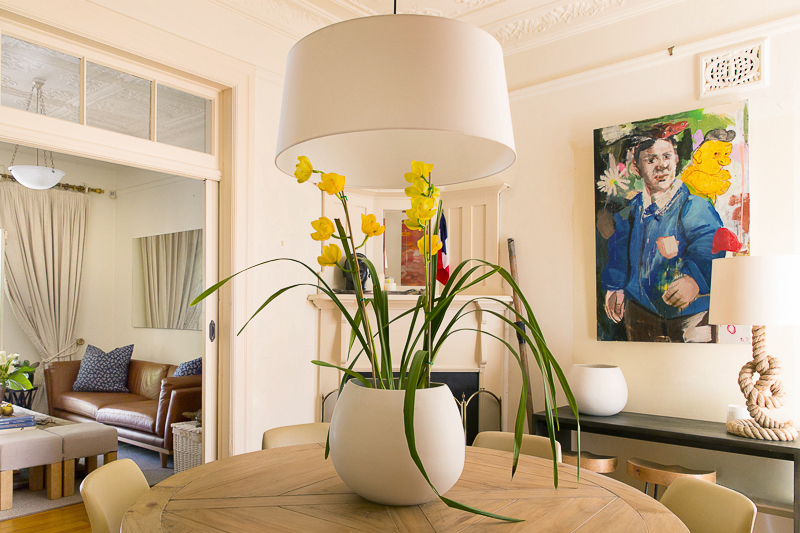 “Equator Homewares do a sofa in this amazing waterproof fabric which looks like linen. If it gets wet – which we all know happens with pets and kids– it just beads on the top. Dog have oil in their skin so they’re always getting something on upholstery even if you don’t see it and it needs washing quite regularly. Living with animals and kids, removable covers are the dream!” 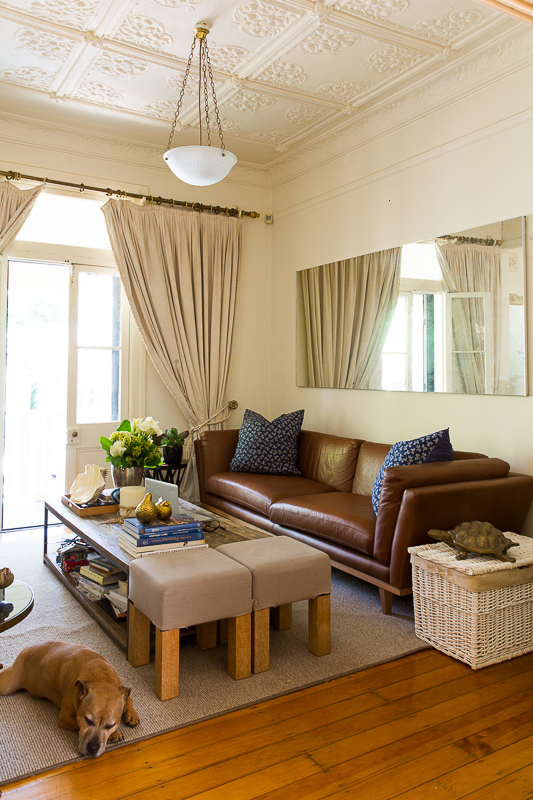 The next rule is not to be too precious about things. “It’s about being comfortable” says Darren. “If you have something that’s beautiful but not comfortable, what’s the point? That’s not luxury, that’s missed the brief! 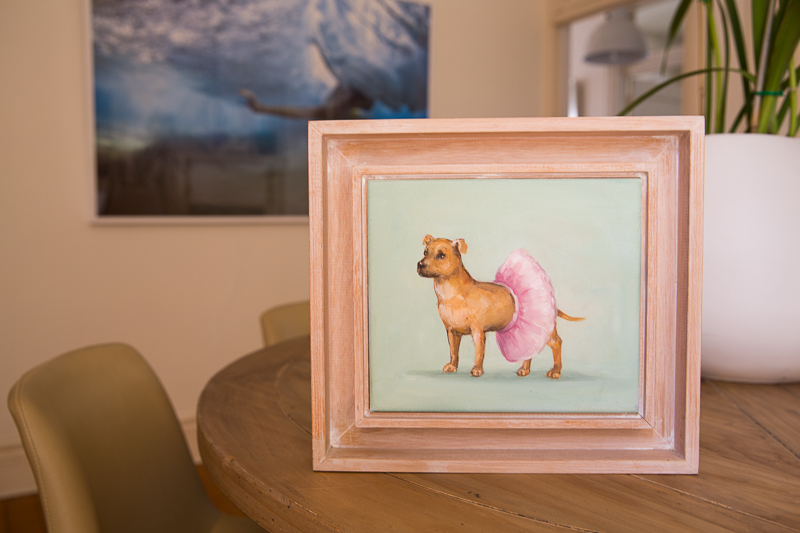 “I don’t believe in hiding everything away just because you have kids, but don’t have anything irreplaceable out. It’ll do your head in always worrying it’s going to get knocked over or broken! Storage is important, and I love that Hugo’s lego can live underneath that coffee table. We’ve also tried to teach him that everything belongs in its place and that he should put things back where they came from when he’s done.”

Next up, flooring. “There are some practical considerations around carpet. You can certainly clean up a dog’s accident a lot easier if you have carpet or even a large rug which can actually be taken outside or taken away to be cleaned. Both Pepi and Doris had an upset stomach recently. You really don’t want to hear the details but when this sort of thing does happen, if it’s on a wool carpet, it can actually burn the wool so you need to remove it as quickly as possible with the right kind of carpet cleaner.” Don’t you just love the glamour?! “With wood, vinyl or tiles you can wipe anything up, it’s easy. And dogs do have accidents and kids have sticky fingers and spill drinks.” (Read more about Darren’s new range for Carpet Court on Interiors Addict next week). 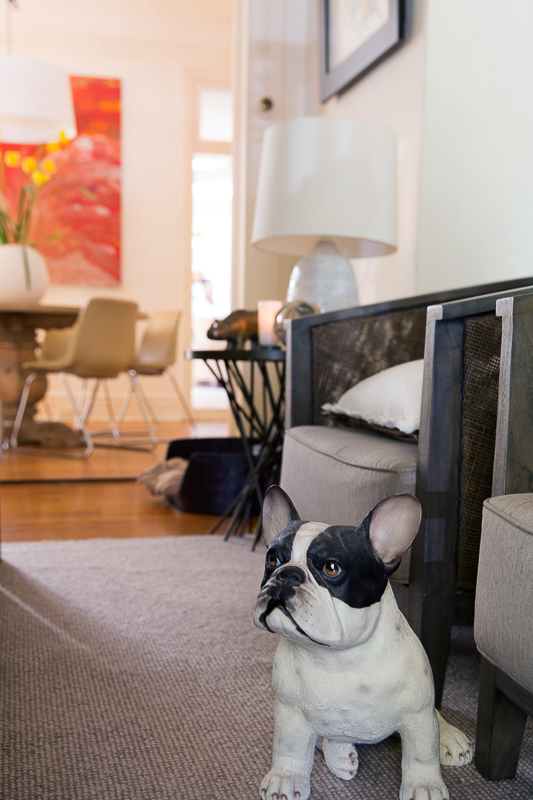 When it came to the coffee table, Darren chose one big enough and low enough that Hugo can get all his lego out and play on it in the room, so he feels part of what’s going on and not like the coffee table is a no-go zone. The rustic timber is a great option because it hides all manner of knocks and scratches. It’s also too low to do much damage if accidentally walked into!

Obviously it’s a good idea to keep anything dangerous, like candles or sharps things out of reach but it doesn’t mean you can’t still have them around the place. 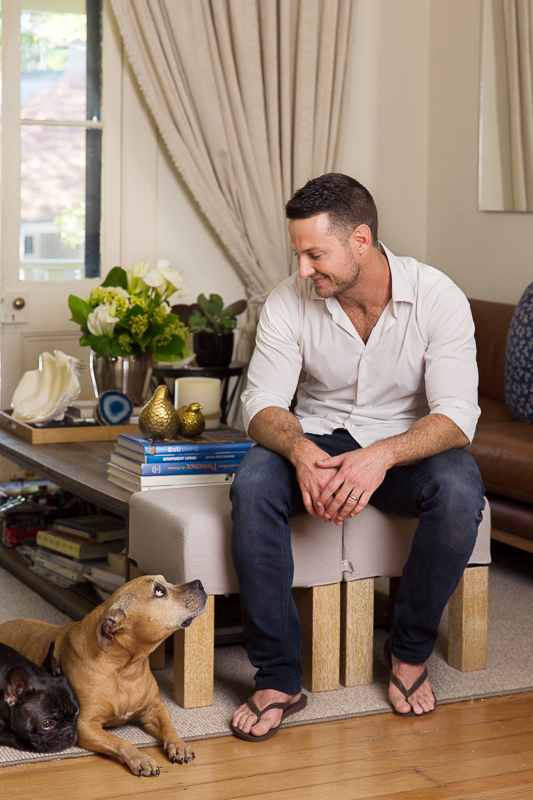 “With animals it’s good for them to have their own spot so they know that’s where they go to bed. And smells are another thing to be aware of. You don’t want your house to smell of dog. We have a showerless shampoo which we spray the dogs with, and even a dog breath freshener spray, and you have to wash their bedding regularly. Loose covers on chairs and cushion covers need washing a lot more often if you let your animals on them. Scented candles also keep things smelling nice.” 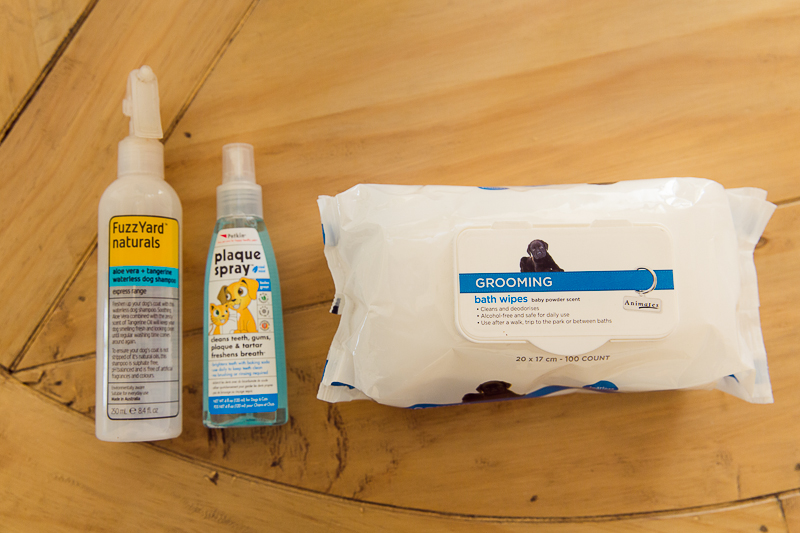 Last but not least, with kids, keeping your home safe is paramount. “Before I became a parent I had no idea how stressful it was,” says Darren. “It’s like they’re constantly looking for ways to kill themselves and you’re constantly trying to be one step ahead of them! You just have to remove all the obstacles and dangerous things you can because otherwise you’ll never stop worrying!”

Thanks for the house tour and tips, Darren!