You could perhaps trace it back to the birth of Etsy but there’s no doubt that crafting has enjoyed a monumental rise over the last decade, paving the way for once-forgotten arts such as patchwork quilting to emerge with a new, on-trend aesthetic. Eschewing the intricate design and ‘more is more’ approach of traditional quilting, Alphabet Monkey stands out in the marketplace for its modern take on the ancient art.

“I think the essence of a quilt and especially a patchwork quilt is a feeling of being special – through history they are traditionally made by a family member for special occasions and  I think it’s important to keep that handmade touch. All our current ranges feature hand cut and hand stitched felt motifs,” says Alphabet Monkey’s Nicole Nicol who produces the range together with an ethical sewing studio in Bali. “I love the creative process so some of the items such as our teether and custom name cushions are made here in my own studio.” A trained interior designer, Nicole worked as a visual merchandiser at Domayne before having children and learning to sew. But it was the birth of her son that inspired her to create her own range of quilts and launch Alphabet Monkey. “My mum thought the sewing gene had skipped me. I only learnt to use a sewing machine after having my son in 2010, to make baby quilts and cushions to fulfil my creative need. I was ready for a change from my previous job and started Alphabet Monkey soon after,].”

She attributes her technical skills to her mother, Denise Griffiths. “Mum’s highly intricate art quilts in bold colours and textures have won prizes and been exhibited all over the world. She taught me everything I know about sewing and encouraged a creative entrepreneurial spirit, however I think my background in interiors allowed me to experiment and create more freely,” says Nicole.

Denise works as a contractor to her daughter, helping to finish quilt bindings and sew patches together. “It gives her pocket money for her many overseas trips and she also looks after the shipping or sewing urgent orders when I’m away. And now that I have a daughter I think it’s really special to see her and my mum at the sewing machine together.  I don’t think the sewing gene will skip her,” says Nicole. 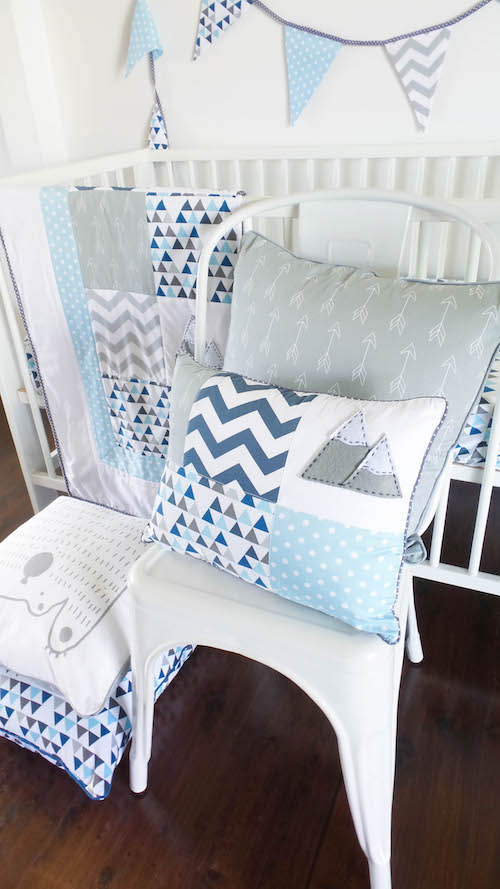 Nicole also has a particular interest in creating stylish interior options for boys, an interest that was piqued after the birth of her son. “Everyone was saying how hard it was to find choices for boys back then but it’s interesting to see how much the market has changed since 2010. There was never the same variety as there was for girls. Also, the market was looking for less traditional approaches to boys’ fashion and bedding with monochrome starting its rise.” Nicole who has introduced her first girls’ range this year but intends to primarily target the boys/unisex market. 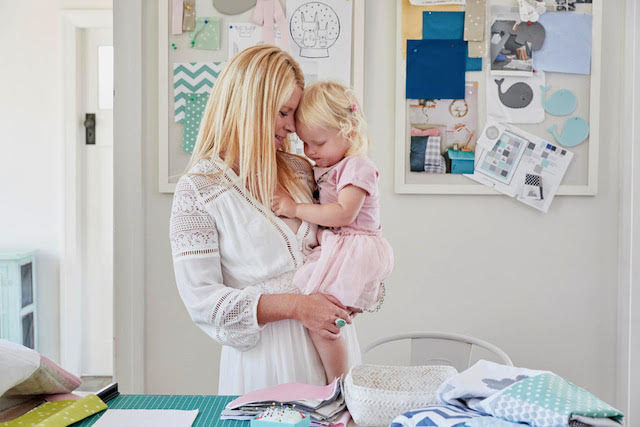 Another aspect that sets the range apart is its exclusive fabrics, made in small-batch runs in Indonesia. “I was always frustrated that I couldn’t find what I had in mind, there were hardly any options to get your own designs printed back then and they were expensive. After a holiday to Bali, I had heard about a lot of Aussies getting products produced in low quantities and thought I’d see if I could get some of my own fabrics printed. I found someone who could assist me with production so I was very excited to be able to create our own unique patterns and prints to offer something truly our own.” Nicole who works exclusively with ethical, environmentally-conscious manufacturers.