Having recently taken the plunge and had our sixties red brick house painted grey (Haymes Paint Rockslide if you’re interested!), I’m a bigger fan than ever of the transformative effect this can have on a dated home for a relatively small spend. I mean, you’re still talking thousands, especially if you have it done professionally (which we did because we would have made a terrible job of it, not to mention probably given up after a few hours!), but the difference is huge. I’ll be sharing more of our facade as we complete more of our exterior plans but you can find it on my Instagram if you’re interested.

Three generous readers who did the same, are sharing their before and afters with you today. I hope it gives you some inspiration if you’ve been thinking about painted brick. If you have any technical questions about painting brick, please drop them in the comments and we’ll get our painters BK Decor to answer them!

Olivia Stoeckel and her husband bought their house in Southern Barossa, SA, for the land, and many people told them to knock it down. “Early in the renovation, we decided to paint the exterior to freshen it up. No one told us to knock it down after that.” 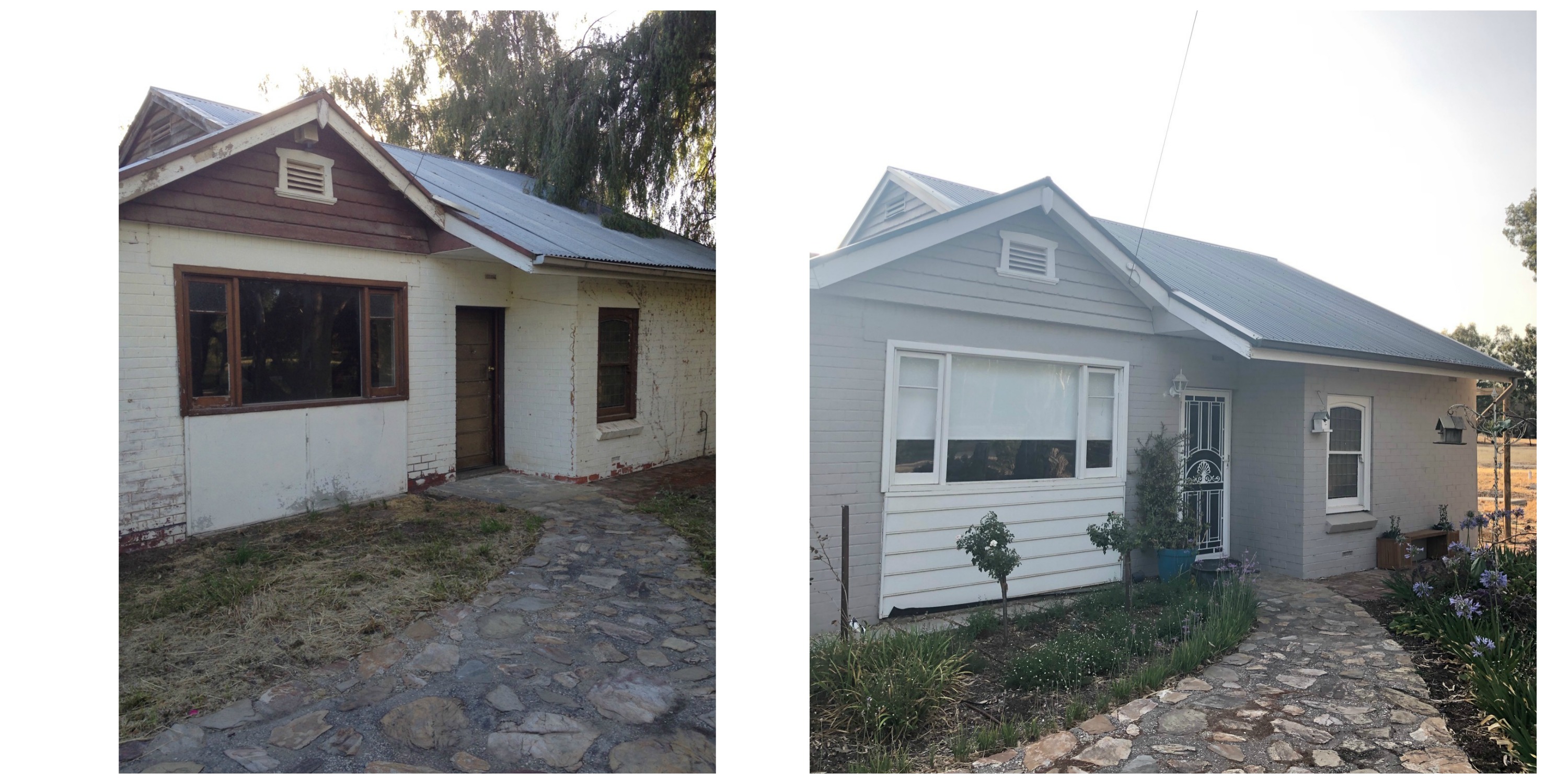 “We looked at render briefly but wanted to keep the texture of the bricks. We think it would have lost some of its charm. We love the result!”

They used Taubmans Endure in Silver Dollar (matt) for the walls and Struan Grey (low sheen) for the windows and trim, and did the job themselves! “We used a really thick wool roller from a paint supplies shop. It gave great coverage and got into the mortar.”

Bree Pollock was inspired by Mid Century Palm Springs homes when she decided to transform her brick abode in Highett VIC, with white paint. “It seemed like the quickest and most cost-effective way to dramatically change the face of our home. I actually love the detail of brick, and our home was so well built, the bricks from 1965 were still in great condition. I wanted to honour some of the original detail in the home instead of simply covering it all up with render.” 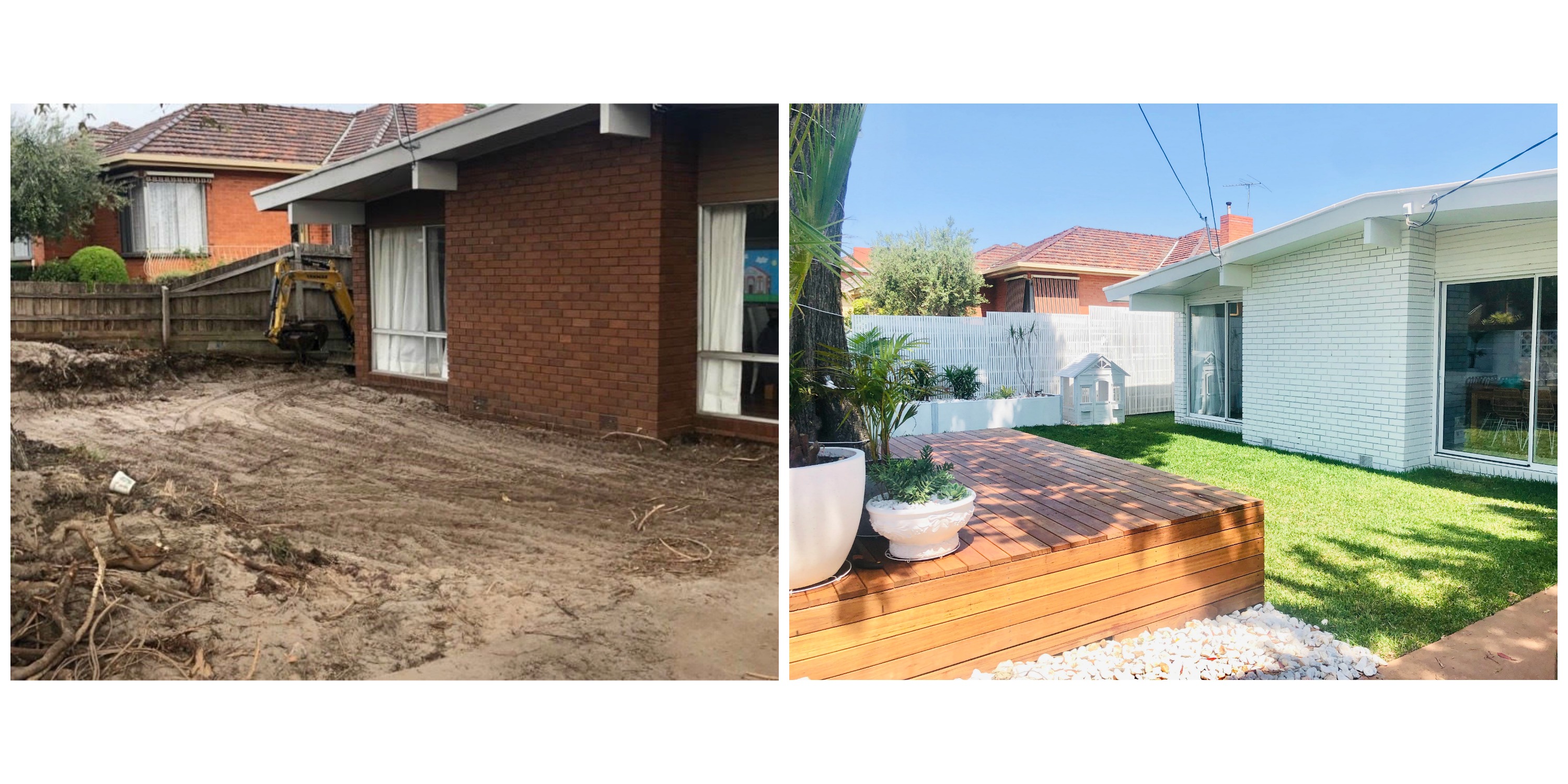 Bree chose Dulux paint in Snowy Mountain quarter strength and her husband sprayed them himself.

“I am totally obsessed with the result! It has transformed our home into a light and airy paradise! If you’re thinking about painting your brick, don’t hesitate, it is totally worth it! The front of your home sets the vibe for what’s inside so for me, the front is a major aspect of any renovation.”

We love this before and after from Alison Scardetta using Dulux colour Wallaby and a spray gun.

“We decided to paint the bricks for two reasons,” she says. “We knew we were going to sell the house and we didn’t want to over-capitalise. Rendering is very expensive. Secondly, the roof line of the house is pretty extreme! I thought that by rendering it and making it a “solid” surface that it would actually accentuate the roof line instead of softening it. We changed the boards on the front of the house to make them horizontal as opposed to on an angle for the same reason.” 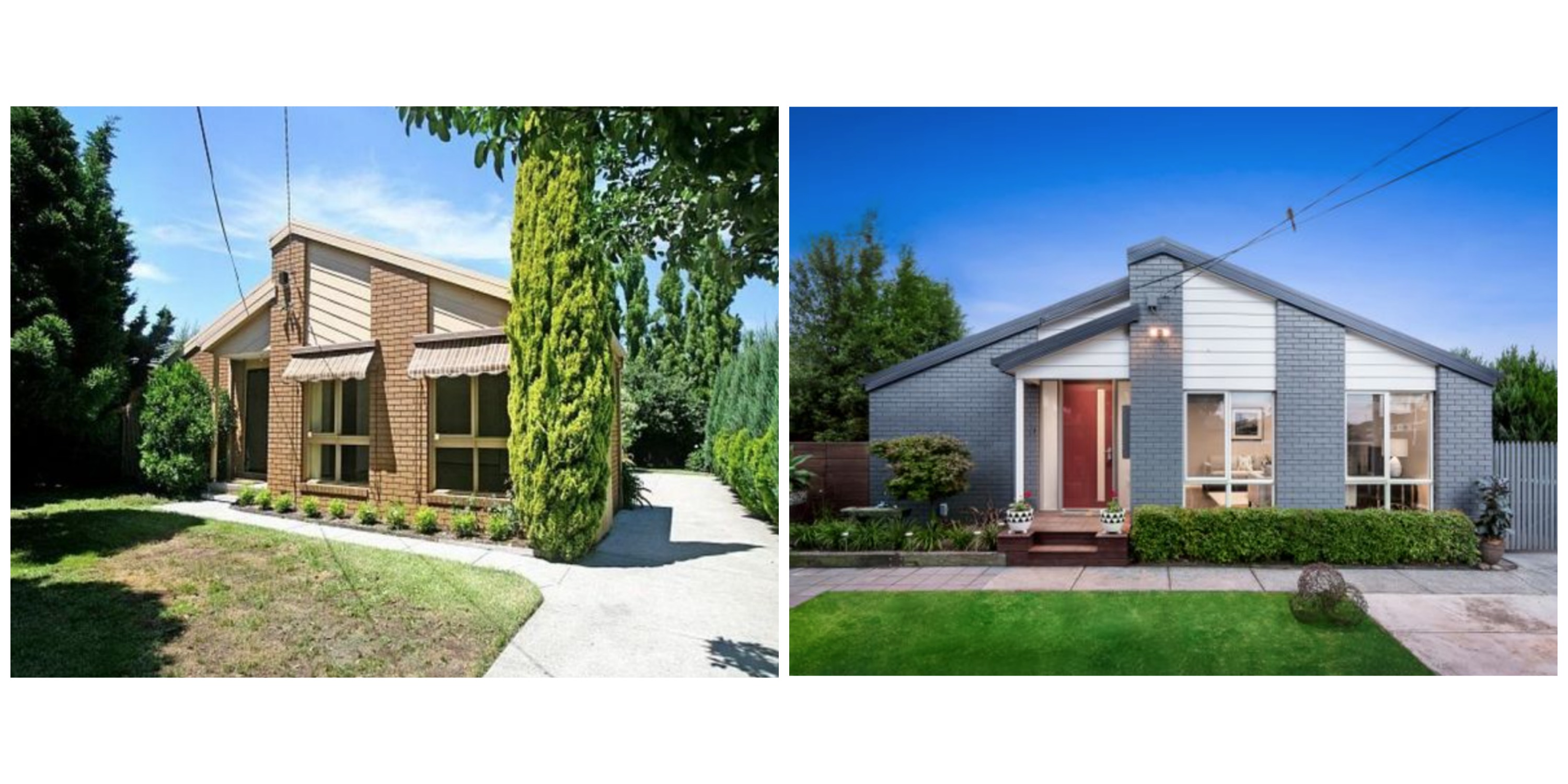 She loved the result. “It modernised the house very easily and it kept the textured look of the brick. I spent a long time choosing the right grey. You don’t want your house ending up looking like a jail!”

Alison said the key to painting brick is good quality paint and good preparation. “The bricks must be completely clean and dry.”

Got a question about painting the exterior of your home? Please ask it in the comments!