From beanbags to designer sofas, the story of Freedom has reflected Australia’s own coming of age in furniture and homeware design. This year, the iconic Australian brand is celebrating its 40th anniversary.

Freedom was an Australian retail pioneer, bringing design in-house well before other Australian furniture retailers. What started as one store selling outdoor and pine furniture in the colourful early 1980s, is now a household name. In 2021, Freedom has come full circle, once again designing and curating in-house to create beautiful products for our unique Australian lifestyle.

Freedom first opened its doors in 1981 in Sydney, and within a year, sales boomed. This success allowed Freedom to open its first Melbourne store in 1984, followed quickly by a new logo and a new look, resulting in sophisticated and stylish catalogues winning the brand a bunch of advertising awards.

Freedom’s progressive approach saw it develop its own in-house design capability in 1987 as well as forming arguably one of the first visual merchandising departments in Australia, challenging the stronghold European and American styles and fashions had on the Australian industry.

Visual merchandising became integral to Freedom’s philosophy, and as such the ‘casual living’ theme was born.

The late 90s were a time of expansion for Freedom – the company went public in
1996 and launched Freedom Kitchens. The following year, Freedom launched its first homewares store and by 1998, it had a store in every state.

In 1999, internationally recognised designer Ken Cato designed Freedom’s new logo
and freedom.com.au went live, bringing the furniture retailer into the digital age. The early 2000s saw Freedom achieve a record of $400million in sales, with 80 stores, while in 2003, it began its hugely successful partnership with TV juggernaut The Block, which continues to this day.

2004 saw Freedom return to private ownership. It continued to lead the industry in 2006, launching new branding and embracing digital and social media as the core brand strategy, joining Facebook and Instagram in 2011.

In 2020, Freedom announced another rebrand, including the current crisp logo, renewing a focus on design creating a new, dedicated design and creative team to
spearhead the transformation. In many ways returning to where it all began – designing and curating beautiful products inspired by our relaxed and contemporary Australian lifestyle.

A lot has happened in 40 years for this Australian retail success story.

For more on Freedom 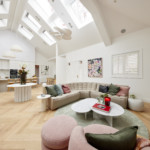 The Block 2021: Living and dining reveals
It was a close one last night with Tanya and Vito’s quirky sunken lounge and Ronnie and Georgia’s broad appeal grey, white and gold room tying first place. But only…
FacebookPinEmailTweet

Aleksa Rokvic interned at Interiors Addict as part of her Bachelor of Media at the University of New South Wales.