After studying a Bachelor of Commerce, Sydney local Anika Patel decided to take a gap year during which she found herself volunteering in a refugee camp in northern Greece. It was there that she came across a talented group of Yazidi women, and began thinking about ways in which she could distribute their beautiful wall hangings.

One of the world’s most persecuted minorities, the Yazidi genocide was started by Islamic State in 2014 and led to the massacre of thousands and the mass abduction of Yazidi women from their ancestral lands in northern Iraq.

“I ended up co-founding Duzzi with a group of women in the refugee camp as I saw that they had so much passion, talent, and time, and could create items that I knew I could sell. It seemed like a relatively simple way to help them have more comfort in their lives and provide them with motivation and a sense of achievement when they have spent years in a situation where they have very little control over their lives,” says Anika of the initiative that sees 100 per cent of profits returned to the camp.

“Duzzi (pronounced Does-ee) means wool or yarn in Kurmanji, which is a Kurdish dialect that is spoken by the residents of the refugee camp. Not only are the items they make made from wool, but wool is one of the things we buy with the proceeds, as the women then use it to make winter clothes for their families,” says Anika.

Profits are also used to purchase many items that most of us take for granted. “Most organisations distributing aid to refugees focus on covering the bare necessities, leaving some everyday items such as deodorant and moisturiser labelled as ‘luxury’, while we in developed countries enjoy these products as everyday as essentials,” says Anika who explains that, in the past month alone, the proceeds have allowed for the purchase of hundreds of balls of local wool, lip balm, hand cream, craft supplies and deodorant.

The next round of proceeds will go towards purchasing bras for every woman in the camp. “Bras are very rarely distributed by the other organisations, but they are an important essential for these women,” says Anika. 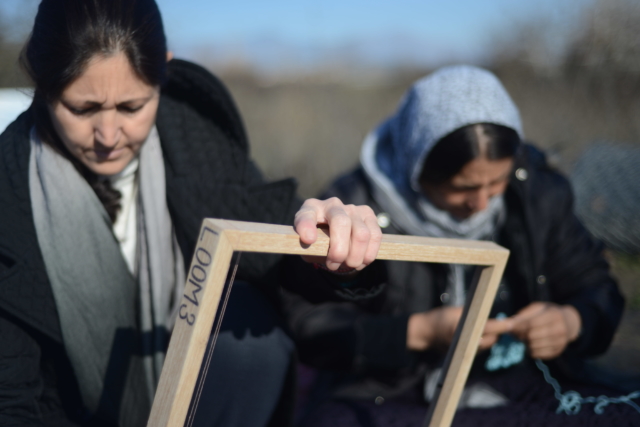