It was 1991 and the American-born interior designer Thomas Hamel was working for the celebrated New York design firm Parish-Hadley. And with a client list that included New York society families such as the Gettys, Vanderbilts and the Whitneys, it might have seemed strange for Thomas to throw it all in and move to the antipodes. “Everyone in New York thought I was insane, but life is short and I’m so glad that I made the move to Sydney. I’ve not had a regret in the world,” says Thomas, who celebrates an impressive 30 years in Australian design this year.

Sponsored by Sydney antiques dealer Martyn Cook to move to Australia, Thomas was able to quickly permeate the upper echelons of Australian society – no doubt due to his classic style. “My first clients in Sydney were Malcolm and Lucy Turnbull and it carried on from there. I’m not a dictator decorator and I’m very much about a client driven style. I want my clients to feel ownership over the end product and to feel comfortable in their homes,” says Thomas.

Thomas’ approach has clearly worked as he now employs a team of 30 to service a large Australian and international clientele that come to him for his high level of service and design acumen. “I always steer away from gimmicks. I’m a classicist at heart but you need to twist things up to make it contemporary.”

And while Thomas services clients globally, he is hugely complementary of the Australian design scene and the way it has evolved over the last three decades. “I’m amazed by how Australia has transformed itself – I think we’re more confident in our own style. Originally, we were always looking to the UK and then to the US. Now when I talk to people in the US, they look at all the Australian magazines religiously.”

Thomas also puts the elevation of Australian design down to education courtesy of platforms like Pinterest and Instagram. “Everyone has raised their demands in terms of style and quality. It’s made it much easier to sell things to clients but now there’s almost too much information and our heads are swimming!” says Thomas.

The designer has several Australian projects currently in the works in Melbourne, Perth and Sydney, and is working on an 1850s heritage house located three hours west of Toowoomba – he’s turning it into a wedding venue and luxury hotel. Current overseas projects include one in Chicago, one in Aspen and several projects in Los Angeles. The pandemic has proven difficult though with online catchups no substitute for face-to-face meetings.

“Interior design is such a visual and tactile world that it’s hard to romance clients on Zoom. And what was great about working on overseas projects was that I was able to see what was going on over there and bring back those ideas to my clients,” says Thomas who explains that he does a lot of research online now, and misses the travel but not the jet lag!

And after 30 years in the industry, Thomas has decided to give something back courtesy of an annual mentorship program that is due to commence this year. “I had such amazing training during my time in New York. I thought it would be nice to give a recent Australian graduate a leg-up in the international world.” 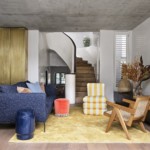