After staring on two series of The Block and winning one of them, Amity Dry and Phil Rankine are well versed in the world of renovation. So when they bought their own Adelaide home last year, it seemed like the natural decision to pick up the sledgehammer and start knocking down walls. That was until their builder had quite the radical idea.

“We bought the house with a reno in mind,” explains Amity. “It wasn’t our dream house but we knew we could make it work because we loved the block, street and location. Yet when our builders, Scott Salisbury Homes, brought back the designs – which were all great – they said to us, ‘We have one more idea, why don’t we knock it all down and start from scratch?’”

While the idea did prick her interest, Amity was immediately worried, being a fan of character homes rather than their modern counterparts. “I’m not a modern, new house kind of girl. But then I started to think what if we could do my dream house; a Hamptons Queenslander Edwardian weatherboard, and the builders said, ‘We can do whatever you want!’ So I got really excited by that idea and also, as we’ve never built from scratch before, we thought it’d be something fun and new for us.”

With the original house due to be knocked down in two weeks’ time, they are aiming to have the slab laid by April and to be in the home by Christmas. However, since the purchase back in October, they haven’t been sitting on their laurels, with Amity taking a lead role in the designing of the floorplan. Doing copious amounts of research (such as looking at floorplans online, visiting homes she liked and taking and collecting lots of photos), in collaboration with Scott Salisbury Homes, she’s now arrived at the dream family home for them and their two children.

“We wanted to create a home that suits our family now, but also one that will work when our children are teenagers; because that’ll happen in a flash! We’ve focused a lot on the flow from indoors to outdoors, which was something we loved in The Block All-Stars house. We had these bi-fold doors that went all the way across the back of the house and brought the outside in, and even though it was quite small it made it feel so much bigger. So we definitely want to do that here too. We also have a beautiful wraparound veranda at the front, which both my and Phil’s work spaces open up onto. And then there’s a big kitchen with butler’s pantry, which is super exciting!” 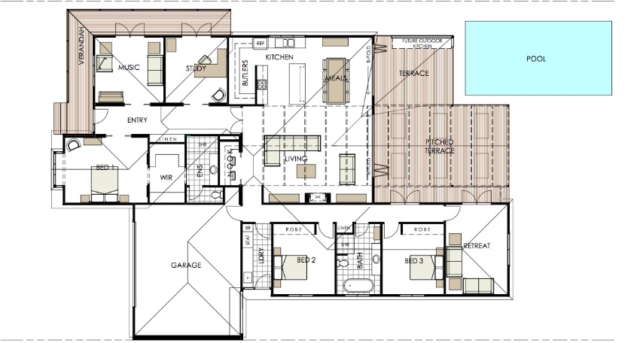 With three bedrooms, two bathrooms and four living spaces — Phil’s study, Amity’s music/formal living room, a playroom and a casual living room — the floorplan can easily shift to five bedrooms plus study, should they decide to sell. “That’s something we learnt on The Block; that you have to make sure your home suits your needs but that it still appeals to a large market. We definitely want to be here for some time, but it’s something you have to consider early on.”

You can follow Amity and Phil’s progress on their new blog Doing Our Block and catch them on this Thursday’s The Block Open House. Watch this space for further updates on the build too!

Disclosure: Amity and Phil are ambassadors for Scott Salisbury Homes.