They promised it’d be a shock elimination but I still didn’t see it coming. With the Blue Tongues (otherwise known as the ex-House Rules contestants), mounting an epic comeback and piping the Redbacks (Blockheads) by one point!

Despite trailing the Redbacks by nine points after the first judging round (where the first four rooms of each house had been revealed) the Blue Tongues managed to close the gap and snag themselves top honours with the second round of room reveals. I’m still not sure how that really happened! I always thought the Blockheads had it in the bag!

So who went home? Really it should have been Kyal and Kara, who scored just 10 out of 20 for their dining room. But they were saved by their immunity, after scoring the highest score in the first round of room reveals. So, sadly, in the end it was Michael and Carlene, scoring 14 out of 20 for their bathroom, that left Reno Rumble.

Onto the judges comments… 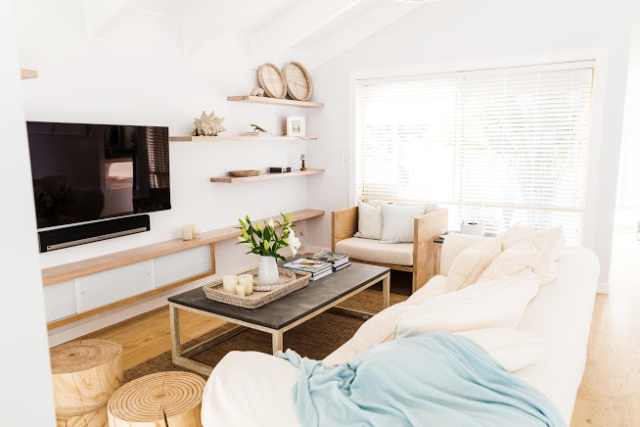 “That’s more like it,” said judge Darren Palmer when he walked into the lounge room. Judge Romy Alwill loved the warmth and Darren loved the light. They thought the lamps and console were spot on, though agreed the styling could have been a bit better and the rug a bit bigger. 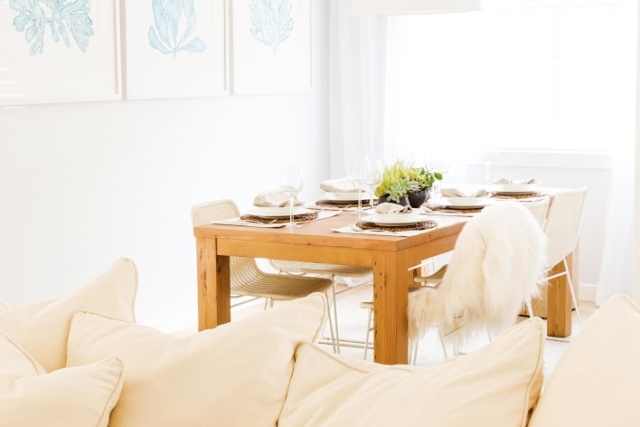 After falling short in their first room, they were keen to step it up in the dining room. “Wow,” said Darren upon entry. Romy loved how by raising the ceiling they had made the space light and bright. Both judges loved the speakers, the art and the aircon, but thought the styling on the table was a bit too much. 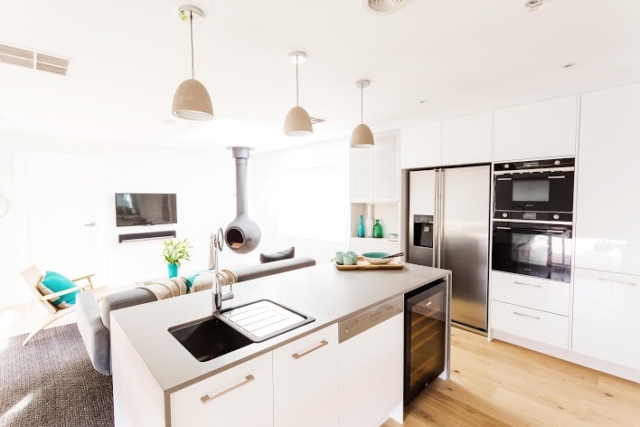 Both judges agreed that removing the structural column that was in the old kitchen was the right thing to do and really opened up the space. Romy loved the colour palette, the benchtops and the mirrored splashback. In the living room the judges loved the addition of the sky light and Darren “love love loved the fireplace.” However, both judges thought the rug was too large for the space and upon close inspection thought the furniture was more retro than contemporary coastal (which was the homeowners’ brief). 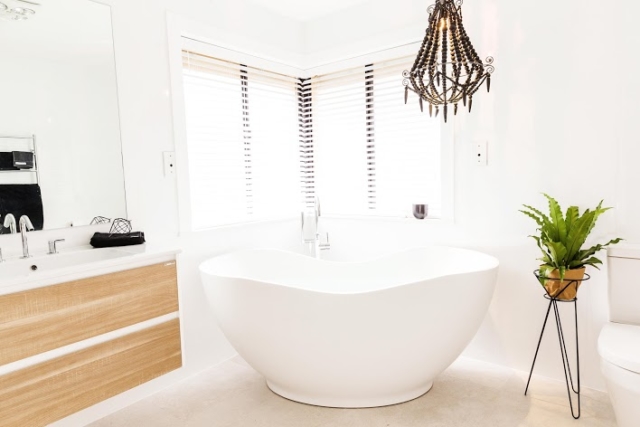 “This is such an improvement,” said Romy. Both judges loved the bath and its shape. They thought the colour scheme fit perfectly with the rest of the house and that the floor tiles and pendant were brilliant. However, they agreed that while the vanity hit the brief it lacked bench space. 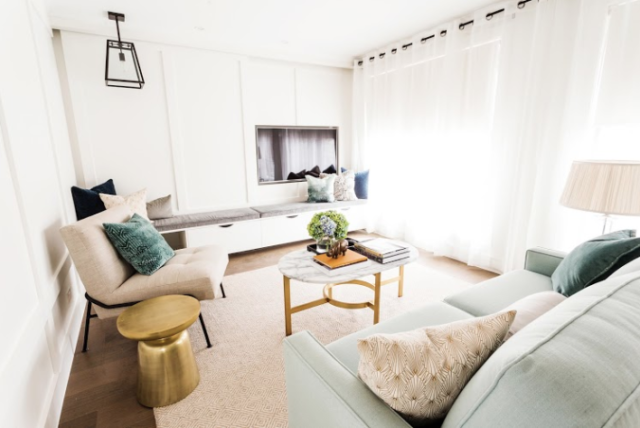 Romy loved the colour scheme of the entry and lounge room. Darren loved the sliding paneling to hide the TV: “How cool is that?!” The judges agreed the room hit the brief of classic contemporary and felt expensive, like a Hollywood A-lister’s house. Romy felt the black pendant was a bit too small and high and that the curtains could have been longer. 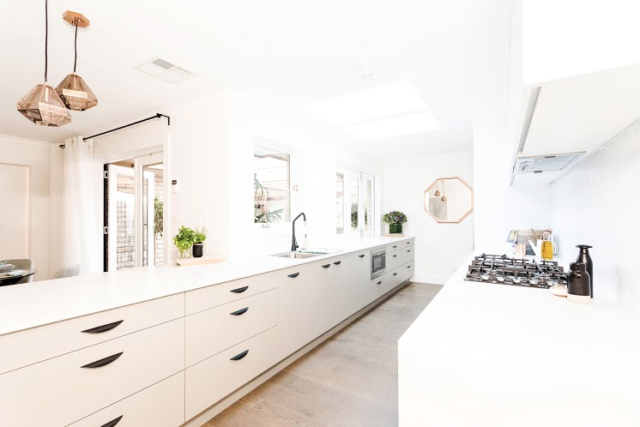 “Holy moley,” said Darren. Both judges agreed it felt like the biggest kitchen ever. Romy loved the herringbone splashback and the big sink. Darren loved all the bench space, but felt the extension of the kitchen into the dining room (for a breakfast bar) had been a really greedy move, at the expense of Kyal and Kara. 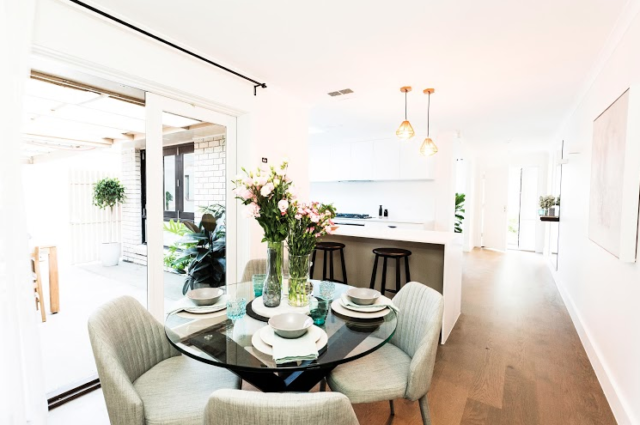 The judges loved the artwork, chairs, mirror and console, but the compliments pretty much stopped there.  “This is the most ridiculous sized tabletop I’ve ever seen,” said Romy. Darren agreed: “How can four people eat here?” Both judges thought the kitchen’s breakfast bar shouldn’t have been there, but rather a dining table for six to eight people. The judges thought the room was a fail. “It pisses me off,” said Darren. 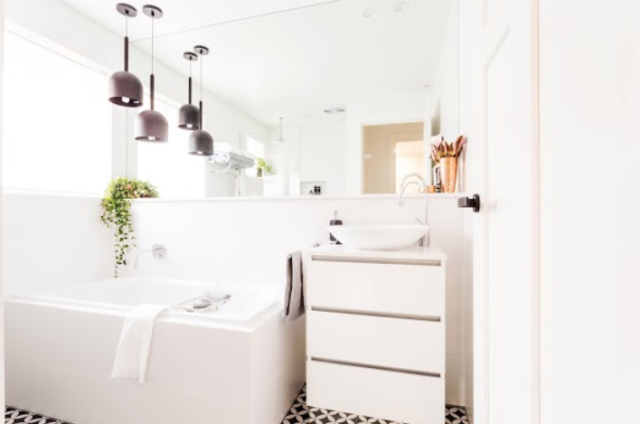 The judges loved the tiles and the generous shower. Darren didn’t particularly like the form of the shower head but liked the function (it had a music speaker!). Both judges thought the space was nicely styled, but that the pendants were a bit dated and the vanity bench space a little small. Romy thought stylistically they had hit the ball out of the park, but functionality had been put second.

So what did you think of the reveals? Which house was your favourite? Do you think Michael and Carlene deserved to go?