Located in the inner-west Sydney suburb of Haberfield and home to a family of four, this heritage listed semi received quite the glow-up recently courtesy of a full renovation and extension designed by Weir Phillips Architects and constructed by Bayside Built. “The house was inspired by French homes and is bright, refined and timeless,” says Doug Carey, the director of Bayside Built.

A traditional federation semi, the original home had plenty of lovely existing features to work with including a 1.5-metre-wide hallway, high (and pressed) ceilings and lovely coloured glass casement windows. The original home was fairly dark though, which is the antithesis of its current state where all of the federation details have been sensitively restored.

“At the front of the home there’s refurbished timber floors, custom joinery in every room, a meticulous selection of stained-glass windows to match the original ones, as well as ornate ceilings that have been given a new lease on life,” says Doug.

And while the owners were keen to respect the home’s history, they also wanted to make it more modern, liveable and far less dim. Key to this process was the addition of a light-filled extension at the rear complete with a double pitched, gazebo style roof that features 360 degrees of automatic windows. “This is the main architectural feature of the space and brings light and breeze into the originally enclosed semi,” says Doug.

Another standout design feature is the gorgeous kitchen – a stylish mix of timber, marble and pale grey joinery combines with concealed appliances for a stylish and minimal finish. “The simplicity of using concealed appliances allows the cabinetry surfaces to be showcased. The real oak veneer by Briggs and the beautiful quartzite Artedomus slab, that has been used on the benchtop, splashback and shelf, are real showstoppers.”

The open plan living, dining and kitchen space flows seamlessly into the outdoors where the new in-ground concrete pool features a custom steel balustrade giving unobstructed views of the pool from the house. “The steel fence looks sleek, and modern yet organically fits within the landscape of the backyard,” says Doug.

“Overall, it’s sophisticated and luxurious, yet subtle at the same time which will allow the house to stay modern and current for generations,” says Doug. 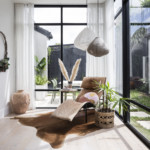 An interior designer’s thoughtful and successful heritage renovation
We love a period home renovation around here and when this one crossed our desks, we couldn’t help but sit up and take notice. A modern yet authentic take on…
FacebookPinEmailTweet