From his perceptions of Australian style to how we can feel happier at home, I thoroughly enjoyed my Zoom interview with American interiors icon and my favourite Queer Eye host, Bobby Berk.

Bobby Berk’s a global name thanks not only to being the face of his own successful design business and furniture range, but one of the popular hosts of Netflix show Queer Eye. His first and only visit to Australia however, was to film an episode of the makeover show in the NSW farming town of Yass, sparking many riffs on their catchphrase “Yass queen!” That was clever!

While he may not have see the best of Australian interior design on that trip to Yass (which later experienced a tourism boom!) in 2018, Bobby says he loves our style, and thinks it’s come a long way.

“It used to be that people I met from Australia said please bring your stuff over here because we don’t have anything good design wise! But in the last five-to-10 years, I’ve noticed some of the best design coming out of Australia.”

Bobby mentions “beautiful” brands like Jardan as standouts, and says he’s been insta-buddies with stylist Jason Grant for years. “I absolutely think Australia’s at the forefront of design with some beautiful neutral and natural palates, it’s quite like the relaxed California vibe to me.”

His own furniture line has been stocked here at Max Sparrow since the start of the year and has been well received. “They do a great job with the design of their stores and I love the way they present my pieces. That’s really important to me.”

He hopes to come back when he can, revealing Australian followers are the third largest in number on his social media.

Of course, I had to ask Bobby for some tips for our everyday homes, especially with us all spending so much more time in them since Covid. For many, this has meant being frustrated with our spaces not working as well or looking as good as they could! “I think the best thing you can do first is get on top of your organisation,” the self-confessed minimalist says. “Often people think they need to add to make their homes better, but in reality they need to get a lot of stuff out of there! So start organising and donating what you don’t need. Start small with something like your junk drawer and it will be less overwhelming.”

Bobby says bathrooms are commonly frustrating rooms for people with overflowing medicine cabinets and a mess of unused products. “We start and end the day in these rooms and if they’re a mess, that’s reminding us day in, day out, that we haven’t achieved what we want to, and makes us feel like failures.”

Other top tips for making your home happier include splurging on quality bedding (even when he was “dirt poor” Bobby says he saved up to buy quality linen). “It’s so important. It’s so nice to crawl into a bed that feels like a luxury hotel bed at the end of the night. It’s so mood-boosting.”

Another tip is to move around things you already own, like art, to other rooms in your home, to create a fresh feel.

Bobby, who usually has a hectic travel schedule for Queer Eye, admits that he hasn’t found spending so much time at home lately a chore. “I’m pretty low key. I’m certainly not someone going to Hollywood events, and bars and nightclubs aren’t fun anymore.” While Bobby loves his fans, being so well known means it’s hard to spend time with his friends in public places and actually get to talk to them, because he gets approached so much. Added to that the pressure of not wanting to seem unfriendly or ungrateful, it can be a tough balancing act.

That precious time off has become increasingly hard to come by as the popularity of Queer Eye has exploded across the globe. And Bobby admits being the name and face of his brand can be overwhelming at times. “I felt that way even before Queer Eye,” he says. “I always said when the store became successful that I wish I’d come up with a different name,” he jokes. “But when your brand is your name, if it fails, there’s no coming back from it.”

Equally, when the show started, he still tried to keep across every aspect of his business before quickly realising that just wasn’t possible anymore. “I had to know every little thing. I micro-managed and had no life at all. But now I have a great team and I’ve learned to let go.”

One thing that never gets tired is his part in making over the homes of the people featured on Queer Eye, revealing he gets the same budget, no matter the space, so can often have more fun in small spaces. “These can often be more satisfying because you have to get creative, plus a little bit of design can make a big impact.”

The show’s makeovers are living proof that our surroundings at home go further than just aesthetics and can really affect how we feel. “If you’re surrounded by chaos, it’s chaos in your mind, ” he says. “It’s so important for our mental health to keep our homes together and nice, and being surrounded by things we love can really make us feel happy.”

Bobby says his own home in LA (before moving there in 2018, he lived in New York for many years) is minimalist and neutral. “There’s not much colour. It’s a lot of ivories, black and browns from timber.” While his husband, surgeon Dewey Do, used to give him carte blanche with decorating their home, Bobby says as he’s exposed him more to design, he has started having more opinions! “He didn’t used to care,” he says. “Now I’ve learned to give him three options I like, so he always has a choice!”

Bobby is excited to be giving a keynote speech at this year’s virtual Decor + Design Show (Decor + Design 360 from 28 September) but only wishes he was coming here for real!

Last but not least I had to ask Bobby: is it normal to (like me) cry at every episode of Queer Eye? “Even I sometimes cry when I watch them,” he says. “We aren’t with each other all the time throughout the show, so there are many moments we don’t see. We still watch the show like everybody else and it’s very much a surprise.” 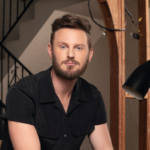 Bobby Berk, Abigail Ahern & Martyn Lawrence Bullard at Decor + Design 2020
It’s been heartening to see many of the industry’s favourite events embrace technology and go virtual for 2020 as we all struggle with the uncertainty of where Covid-19 will end.… Queer Eye: Bobby Berk launches range in Australia
While I love Queer Eye, I usually find myself fast forwarding to the interior makeover segment of the Netflix show. Do you relate? The personal style overhauls are always interesting,…
FacebookPinEmailTweet