I have a serious soft spot for heritage buildings reimagined for today and Sydney’s latest five-star hotel, the Primus, is nothing short of a magical transformation. The former Sydney Water Board headquarters in Pitt Street epitomises the expression ‘great bones’ but years of decay had left them needing some serious cosmetic work. And when you add to that the challenge of turning what was a building full of offices into a luxury hotel and restaurant, this was never going to be a straightforward task. 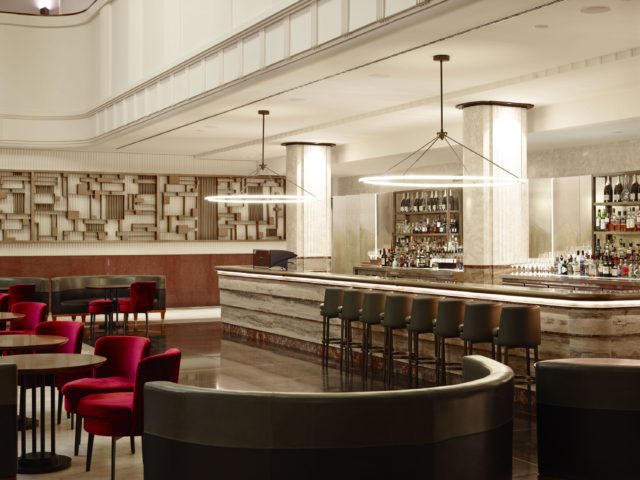 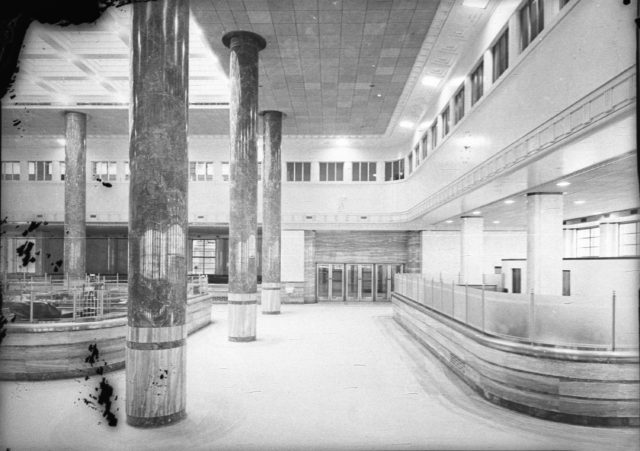 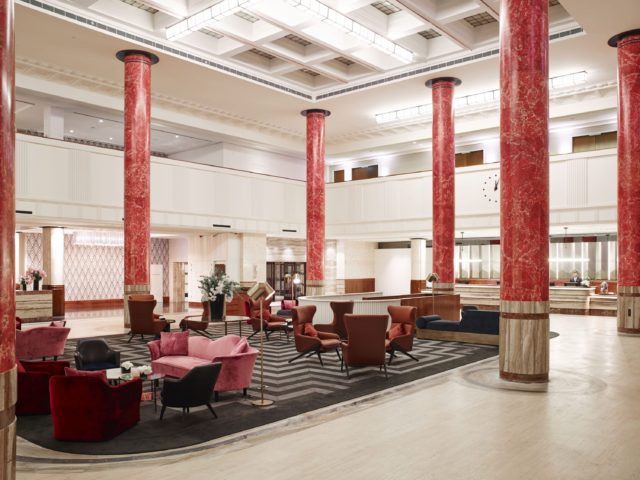 The design and architecture firm for the job was Woods Bagot, led by Wade Little. Heritage features of this once important public building have been preserved, repaired and used as inspiration, and the hints of Art Deco, both original and new-but-perfectly-sympathetic, are everywhere. At the same time, this is a beautiful, contemporary, city hotel with a rooftop pool overlooking China Town. I’m not sure there is anywhere more unique to spend a night in Sydney. I was lucky enough to stay there recently and fell head over the hells for the place, returning later to try The Wilmot restaurant for lunch (delicious!). 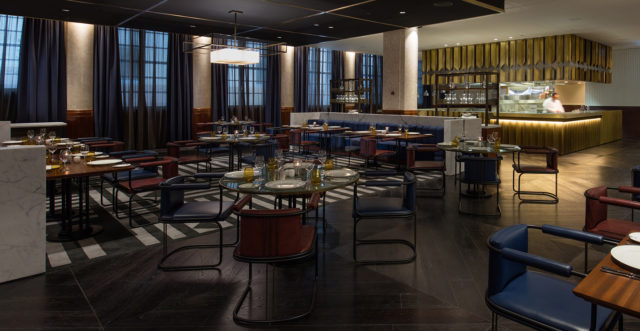 “The chance to work on a building of such significance was an amazing opportunity we didn’t want to miss, said Wade, of the project, which was a year in the design stages and 18 months in construction. “The architecture of the building was hidden behind layers of previous renovations and this was definitely something that excited me.” Heritage buildings are his favourite to work on, in fact. “Rejuvenating buildings which are often in a dilapidated state is not only very rewarding, but at times can offer some exciting challenges.”

It’s hard to imagine it now, but Woods Bagot was first introduced to the building as a derelict office building, not occupied in some time. “The interior was a graveyard of eighties workstations, with peach and pink finishes. Many of the original features were either covered up or gone altogether. We started by looking at what we could see; bronze window frames, travertine and green marble, the striking red columns created by Italian craftsmen and the dark timber dado on the ground floor.

“The geometric patterning of the Art Deco period was explored on a giant scale, from the central carpet of the atrium to the grand foyer, which gives the guest the experience of being in a luxurious grand hotel.   The profile of new walls, counters and decorative elements all have some reference, no matter how fine.” 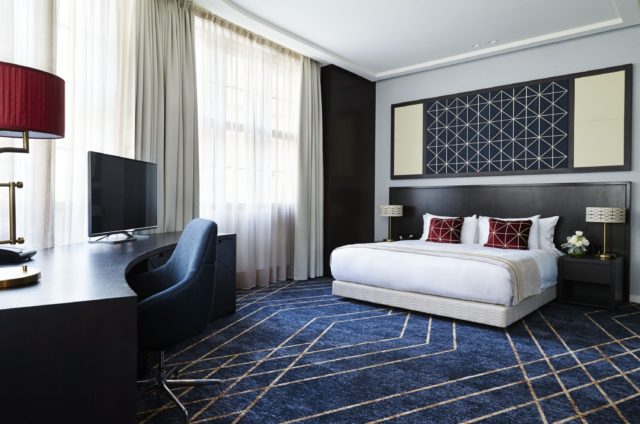 In terms of making a former office building feel like a luxury hotel, its great bones certainly helped. “It has ceiling heights and proportions that you can’t really recreate from a new building,” Wade said. “The foyer and building façade had solid stone finishes which really helped define a starting point for the grand polished granite floor, travertine walls and brass detailing. The softer touch of furnishing and carpets provided the luxurious finish to the amazing backdrop.”

Anyone walking through the front door cannot help but be instantly wowed by the incredible marble-clad columns in the vast double-height foyer. “The opening within the floor had been covered over, the glazed skylight was no longer waterproof and the giant red columns had been all but destroyed,” said Wade, principal and global hotel sector leader. He explained they used archive photography to recreate the detailing of the plaster and marble.

The bar at the far end, in the lobby lounge of the ground floor, was originally a counter with offices behind.  All the detail had been demolished, but there were photographs of the layered stone and brass.  “We were able to recreate the tiered layering of the marble, which is also curved. It was a significant challenge for the builder and they did an amazing job.” 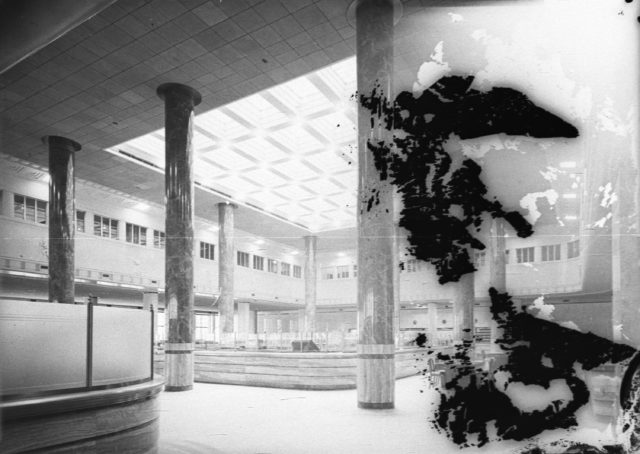 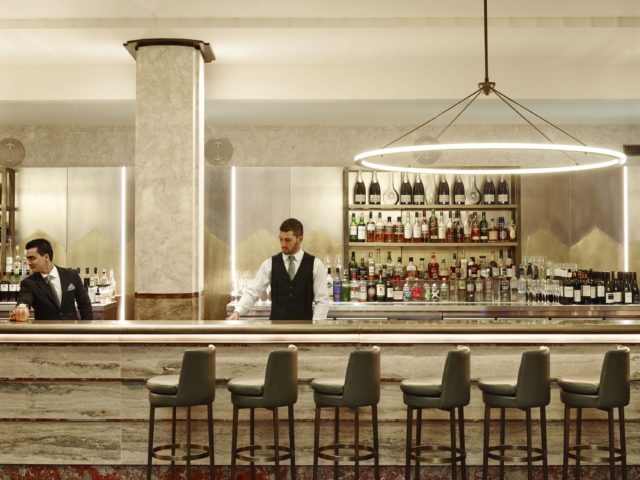 All this and there’s also a rooftop pool! That’s right, smack bang in the middle of the CBD! Wade says it’s his favourite part of the whole project and is all about comfort, relaxation and being free of all the grand trappings of the lobby. “The rooftop is a green oasis in the middle of Chinatown,” he adds. “A playful attitude has been taken to furniture and fabrics. The mix is teak, green and abundant navy; all different patterns and shapes.” 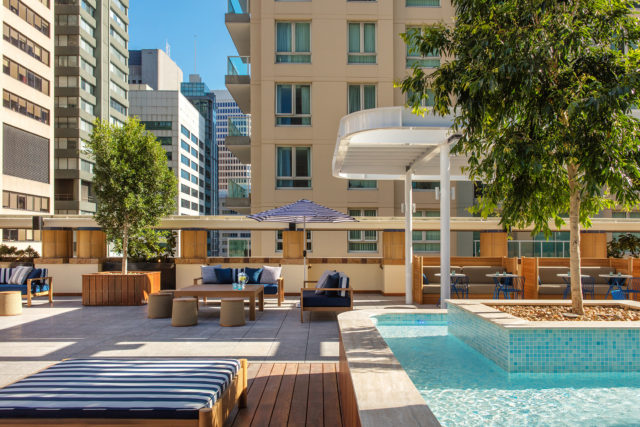 All manner of guests have stayed at the hotel since it opened in December, from fashionistas to business people, to former employees of the water board; even a couple who met after working in the building ended up getting married.

Wade loves that they have opened up a building to the public which for so long remained hidden. “We have achieved a great result for our client and the building in the longer term. It has been the culmination of so many efforts from a large group of people and it was great to be involved and be part of such a fantastic project.” 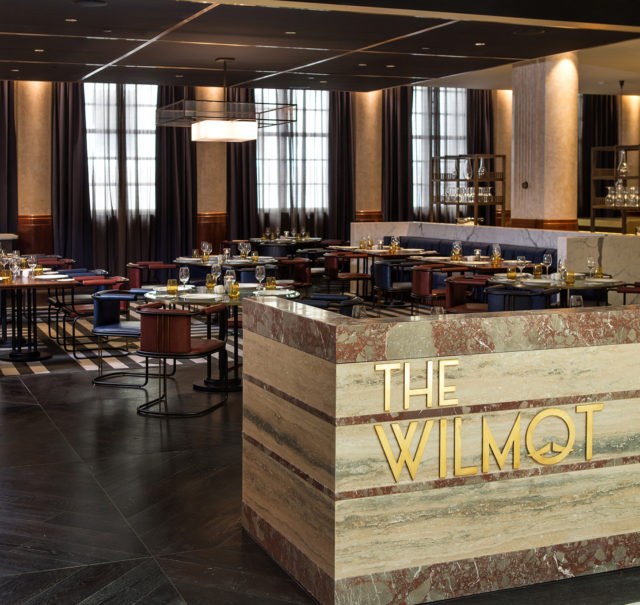 You could easily miss this hidden gem, with its rather unassuming entrance off the street, but next time you’re in the CBD, or if you’re planning a trip to Sydney, make sure you stop in, if not to stay, then for a cocktail or lunch at The Wilmot restaurant (lunch menu from $35 for one course and a glass of wine). Rooms from $290 a night or $330 with breakfast. 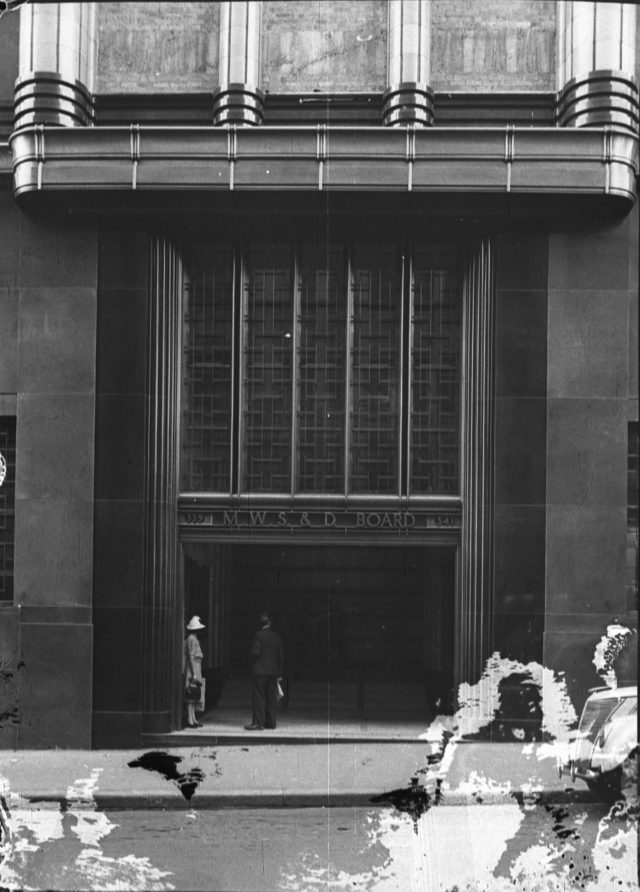 Disclosure: I did not pay for my overnight stay at The Primus and no coverage was guaranteed.